A weekend packed full of subplots in National One and is it last chance saloon for Clifton and Worthing? 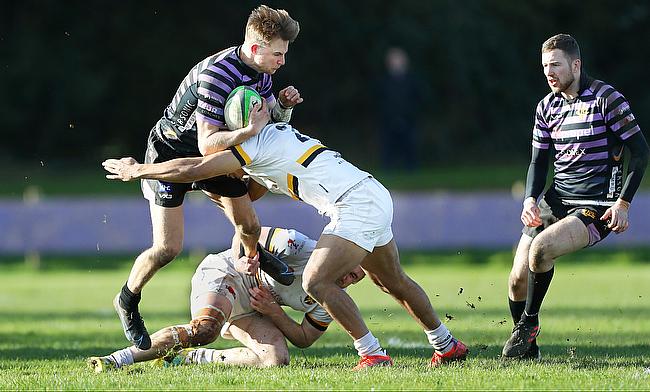 While this stage of the season might usually throw up some dead rubbers, it is anything but in National One with title ambitions also on the line across National Two North and National Two South.

This weekend, there is something riding on all seven games in National One which is testament to how compelling English rugby's third tier has been this term.

After the top-of-the-table between Caldy and Rosslyn Park took centre stage in Round 26, the fight for survival will be in the spotlight this Saturday.

Whilst Tonbridge Juddians had their relegation confirmed after suffering a fifth straight defeat last weekend, Leeds Tykes are desperate to avoid following them through the trapdoor. As things stand, Jon Callard's side are nine points from safety with five matches left to play in their campaign, but they must try and arrest a slide of just one win from their last eight fixtures.

Putting a positive spin on things, the Yorkshire club have collected 10 points over that period but rather than overanalysing what they have done previously, the next three weeks will surely define their season.

Following their trip to The Slade, the Tykes host fellow relegation rivals Plymouth Albion before they visit Darlington Mowden Park - who themselves aren't out of the woods just yet  - so success in Surrey on Saturday could potentially calm some frayed nerves amongst the Leeds Tykes ranks as they enter now or never territory.

In fact, a win for Leeds combined with a victory for the aforementioned Darlington Mowden Park (11th) in Round 27 would significantly change the picture at the foot of the division. The North East club have an 11-point cushion above danger but they take on a Plymouth Albion side who are eight points clear of the dotted line.

DMP will certainly hope their recent upturn in results continues at The Northern Echo Arena as successive triumphs over Leeds Tykes and Tonbridge Juddians has left them on the cusp of sealing their place in National One for another year.

As for Albion, their spirits were lifted last time out after their 34-21 win over TJs, but considering how the next two weekends look for the men from Brickfields, they will understand the importance of backing up that vital victory on Saturday.

(Just to add another layer of drama to proceedings, Leeds Tykes also have a game in hand over both DMP and Plymouth...!)

And if the first part of this National One preview gave you a headache, then Blackheath's role in their quest for survival may have you reaching for the paracetamol. With the four teams around them all facing one another between now and the end of the month, 'Club' know they just need to focus on their job and their job only.

After defying the odds to defeat promotion hopefuls Rosslyn Park at the end of March, James Shanahan's charges began April with a narrow loss at Bishop's Stortford and that probably sums up their campaign in a nutshell. More often than not, Blackheath have been on the wrong end of those tight scorelines - highlighted by the 14 losing bonus points they have accumulated this term - and it has left the men from Well Hall directly above Leeds Tykes as things stand.

'Club' have also played two more games than their rivals and with a clash against Rams RFC (6th) to come this weekend before ending the season with visits to Sale FC (2nd) and then Cinderford (5th), their position does begin to look slightly more precarious, but Blackheath certainly have the quality to dig themselves away from trouble.

At the top of National One, Caldy (1st) took another huge stride towards the Championship last week after their pulsating 18-17 win against Rosslyn Park, and it means Gareth Davies' side are now seven points clear at the summit with three games left in their season.

This Saturday, they welcome Bishop's Stortford to Paton Field aiming to extend their winning streak to 15 matches as they edge closer to an historic promotion. Of course, second-placed Sale FC - who have a game in hand over the league leaders and also still have to play Caldy on April 23rd - will be keeping close tabs on events in the Wirral whilst also maintaining their steely focus when they take on Birmingham Moseley.

Last Saturday, Jonathan Keep's men moved into the silver medal position following a ninth win on the trot and in doing so, they dislodged a Rosslyn Park side who have seen their title aspirations almost evaporate in front of their eyes. Five defeats from their last seven matches means any promotion hopes are now out of their control, but they can continue their fight if they can defeat Chinnor at Kingsey Road.

Elsewhere, Cambridge (4th) are still in the title conversation with four furlongs to go. A run of one loss in their last 13 games means the Blood and Sand sit nine points off the top with a game in hand ahead of their meeting with Taunton Titans.

With the top three in National Two North all securing maximums in Round 26, the promotion picture remains the same as we enter the second weekend of April.

League leaders Hull remain six points clear at the summit after clinching a comfortable bonus-point win at Bournville and they will be hoping for another relatively straightforward afternoon on Saturday when they host second from bottom Blaydon.

Sixteen straight victories has left Gary Pearce's side in control of their own destiny but Rotherham Titans (2nd) will continue to exert pressure on the table-toppers, especially considering Hull still have some tricky fixtures to negotiate against Fylde and city rivals Hull Ionians.

Adam Byron's side may expect the winning machine that is Hull to rumble on in Round 27, but they must not take their eye off the ball when they do battle with Huddersfield (14th).

"Please can we have a repeat of the brilliant entertainment we saw in Round 26?" ??

This week, Leeds Tykes' visit to Tonbridge Juddians headlines The National League Rugby Review Show + we'll be across all the other major stories from #Nat1 and #Nat2.

The Titans have won eight from their last nine, including a victory over Tynedale who take on third-placed Sedgley Park this weekend. The Tigers are currently nine points behind Hull and visit the North East after returning to winning ways against Chester last time out.

Sedge know they will be relying on favours from elsewhere if promotion is to become a realistic possibility for them but for that to happen, they must focus on their own tasks at hand which begin by trying to secure a first away win over Tynedale since 2016.

Tyne actually head into that clash in good nick after stringing together seven victories from their last eight games and that excellent sequence has left them in the top half of the standings.

Ahead of them, the two highest points scorers in the division - Stourbridge (4th) and Fylde (5th) - meet in the Midlands in Round 27. Between them, they have racked up 1,844 points this term so if you want value for money, we'd recommend visiting Stourton Park.

As the National Two South title race reaches its final chapters, four teams are still in with a chance of gaining promotion to National One. Esher are currently at the summit of the division and will be hoping to record their seventh successive win when they welcome Bury St Edmunds - who have lost only two of their previous 12 fixtures - to Molesey Road on Saturday.

The Eees are four points clear of nearest rivals Redruth but should Peter Winterbottom's side slip up this weekend, the Reds could leapfrog them if they were able to secure a bonus-point triumph over a Rochford Hundred outfit who have won their last two matches.

But the standout fixture in Round 27 comes from Station Road as Clifton (3rd) take on Worthing Raiders (4th) with both clubs looking to keep Esher in their sights.

Starting with the hosts, the Lavender and Blacks will be eager to maintain their recent purple patch of form having picked up a hat-trick of wins since they lost against the table-toppers at the start of March.

Matt Salter's side produced a scintillating final quarter to defeat Worthing 24-23 in the reverse fixture back in December and a repeat of that outcome would keep Clifton in the hunt.

Get down to your local club and don’t forget to also subscribe to our review Show ?? https://t.co/UnmXIYjmgO https://t.co/01tNX5phBQ

As things stand, they are six points off the lead but this really does feel like a season-defining fixture for Clifton and Worthing.

Consecutive losses to Redruth, Hinckley and Esher has derailed the Raiders' title bid and they are now 10 points behind the league leaders with four games left to play.

However, if they were to beat Clifton, they then take on Esher so they could potentially reignite their promotion hopes over the next two weeks. Either way, you get the sense that this Saturday's clash in Bristol will keep one club's dream alive and extinguish the ambitions of the other.

Away from the race for the title and Leicester Lions (5th) can be mightily pleased with the way they are ending the term. Gareth Collins' men have won five of their last seven games and after maintaining their superb home record last time out, the Midlands club head to the capital to face Barnes this weekend.

Subscribe to The National League Rugby Review Show to watch the best tries and biggest moments from Round 27...