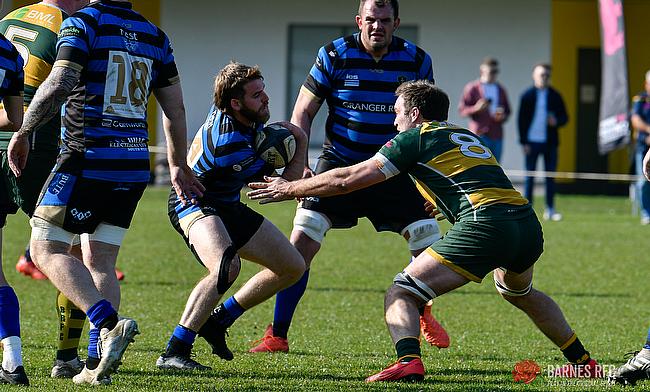 With a selection of the promotion candidates all facing difficult trips on the road, there might be a few surprises over the Easter period whilst at the other end of the scale, Leeds Tykes and Plymouth Albion do battle at the foot of the third tier.

Well, it has boiled down to just two games for Caldy. Gareth Davies' machine are on the brink of creating history as promotion to the Championship is now within reach. An astounding run of 15 straight victories has created a seven-point gap between themselves and the chasing pack, and at no point has their remarkable sequence of results looked like fizzling out.

However, the men from the Wirral have two tricky fixtures to conclude their campaign. Of course, next Saturday's humdinger against second-placed Sale FC at Paton Field has been circled on the calendar many times in recent., weeks, but a trip to Old Bath Road to face Rams RFC (5th) will not be a stroll in the park for the league leaders.

Seb Reynolds' boys will be keen to cement their place in the top five given their long list of injuries this term, and they enter this meeting with the table-toppers having returned to winning ways at Blackheath in Round 27. Rams are more than capable of ruffling Caldy's feathers and if they were to do so, it would certainly shake up the race for the title.

The aforementioned Sale FC have the chance to cut Caldy's lead to just two points before their promotion rivals kick-off in Berkshire as they entertain Blackheath on Good Friday. Jonathan Keep's charges are not going away and 10 successive triumphs has meant this title tussle could go to the wire.

On paper, the North-West outfit will be favourites for this - which would tee up next week's clash with Caldy superbly - but Blackheath are also fighting to achieve their goals, albeit a very different target. Their recent success against Rosslyn Park suggested 'Club' might have turned a corner, but back-to-back losses to Bishop's Stortford and Rams means James Shanahan's troops are only seven points clear of the drop.

However, Leeds Tykes - who occupy the final relegation place - have two games in hand over Blackheath and considering 'Club' only have one fixture remaining after this weekend (away at Cinderford - 6th), a positive outcome at Sale would be a massive shot in the arm.

"We've still got four games to go. It will test our character and test our resolve but rest assured these players, myself and everybody will be working for survival."

Below the top two of Caldy and Sale FC is the showdown between Kieran Power's Rosslyn Park (4th) and Richie Williams' Cambridge (3rd), and this weekend's meeting between the pair will surely end the possible promotion hopes for one of these teams.

Two matches each will remain following this contest at The Rock and for the visitors, the momentum seems to be with them. Heading into Round 28, the Blood and Sand have won their last six and have lost just one of their previous 14 matches. As things stand, Cambridge are nine points off the top with a game in hand to come on the final weekend of the campaign.

As for Rosslyn Park, they were sitting at the summit of National One just before Christmas, but a difficult run of form has completely derailed their title bid. Five defeats from their last seven fixtures leaves them 13 points behind Caldy with a game in hand, so they will know they have to do their job - as well as rely on a few favours from elsewhere - if Park are to somehow claw themselves back into the epicentre of this promotion battle.

We touched on the fight for survival briefly when discussing Blackheath before, and 'Club' will undoubtedly be keeping close tabs on events in Yorkshire as Leeds Tykes host Plymouth Albion. The hosts are still trying to pull off a great escape, but their challenge was dented in the cruellest fashion last time out.

A late score from Dominic Hardman looked to have won it for Leeds only for Tonbridge Juddians to snatch the victory straight from kick-off after being awarded a penalty. Director of Rugby Jon Callard did try to put a positive spin on the result as his side did collect a further two points and also closed the gap to Blackheath.

Including this weekend, the Tykes still have four games remaining whereas Plymouth have three and they currently sit nine points ahead of their opponents on Saturday. Like Leeds, Albion added a couple more points to their pot in defeat against Darlington Mowden Park but a first victory on the road since November would surely be a huge step towards confirming their place in the third tier for another season. This has the feel of an absolute must-win about it.

Also on a beautifully poised National One weekend, Cinderford host a Darlington Mowden Park side who all but guaranteed their safety last week whilst Chinnor travel to Bishop's Stortford and Taunton Titans entertain Tonbridge Juddians.

A further five points added to the total for Hull but not in the way many would have expected this week. The league leaders collected their 17th straight win in Round 27, and they were awarded another maximum on Monday after National League Rugby ruled that Huddersfield had failed to honour their fixture against the table-toppers in February, meaning the match was 'treated as a home walkover.'

The outcome not only enhances the title aspirations of Gary Pearce's side, but it now leaves them on the verge of promotion. As things stand, the Yorkshire outfit are nine points clear of nearest challengers Rotherham Titans with just three games to go.

If my maths is correct, Hull only need seven more points to be crowned champions and this weekend, they visit Fylde (5th). Chris Briers and Alex Loney's side might have fallen away from the title conversation a while ago, but the entertainment they provide cannot be understated. Only Esher and Clifton have scored more points across the National Leagues this season than the men from Woodlands, but they are coming up against the division's best defence on Saturday.

Straight back to it ??

The Easter weekend across the National Leagues is serving up some treats! ??

?? @DingsCrusaders v @RedruthRugby is our key game with focus also on the promotion races in #Nat1 and #Nat2n!

If Fylde can cut loose and cause a few problems, this might be an unexpected bump in the road for Hull.

And if the leaders are to slip up in Lancashire, Rotherham Titans (2nd) and Sedgley Park (3rd) will be looking to capitalise. The former are not in action this weekend as their clash with Harrogate was ruled to be a home walkover in the Titans' favour whilst Sedge are aiming to stretch their run to one defeat in 12 when they host Loughborough Students.

Elsewhere, we have an intriguing battle when Stourbridge (4th) visit Hull Ionians (6th) whilst Tynedale travel to Bournville and Luctonians take on Sheffield Tigers. Meanwhile, National Two North Player of the Week Liam Reeve will be keen to match his performance from Round 27 when his Chester side go to Blaydon whilst Wharfedale's meeting with Huddersfield wraps up the weekend's fixtures.

During title races, the phrase "potential banana skin" begins to become more prevalent, and you might be putting that set of words next to Redruth's (2nd) visit to Dings Crusaders in Round 28. Nigel Hambly's side have won their last five and are very much on the coattails of league leaders Esher, who travel to Canterbury this weekend.

The Reds are four points off the top and after Clifton (3rd) and Worthing Raiders (4th) slugged out a 31-31 draw last weekend, you get the feeling this title race is becoming one which contains only two horses. After this Saturday, Redruth host Barnstaple before visiting Leicester Lions on the final day, but the challenge which Dings pose will be their only focus.

A perfect example of what this pulsating #Nat2s season has been all about ????@wyntingley takes us through last Saturday’s gripping encounter between @cliftonrugby and @WorthingRFC ??

Are there more twists to come in this promotion race?

The Bristol outfit are flying at the moment and seven straight victories has left them targeting their highest finish in the league since 2009. The Crusaders have dispatched the likes of Henley Hawks and Leicester Lions (who are both currently above them in the table) so make no bones about it, they won't make life easy at Redruth especially at Shaftesbury Park where they haven't lost in 2022.

As mentioned above, Clifton's draw with Worthing Raiders in Round 27 perhaps wasn't the ideal result for either side, but three points is three points and both will keep battling until the end. The Lavender and Blacks - who are unbeaten in four - make the trip to Rochford Hundred on Saturday whilst Worthing - who are without a win in four - host bottom of the table Westcliff.

targeting a 12th consecutive home triumph whilst Bury St Edmunds take on Guernsey Raiders, Old Albanian are up against Barnes and Hinckley head to Devon to face Barnstaple.

Watch The National League Rugby Review Show and join us for a sensational climax to the season...