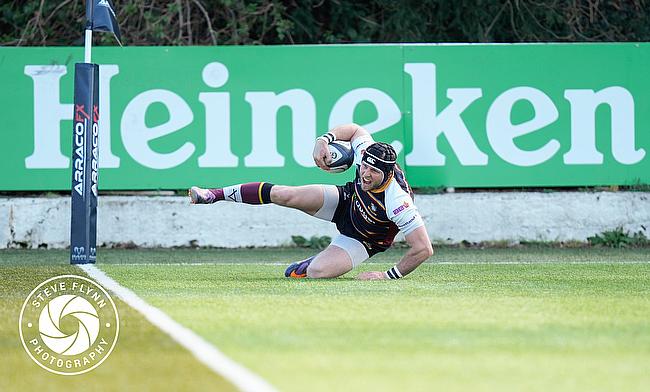 Caldy’s narrow 18-17 victory over title rivals Rosslyn Park was not only a wonderful advert for National League Rugby, but a massive statement from the Wirral outfit as they continue their push for promotion.

Also in the third tier, Tonbridge Juddians' stay at that level has come to an end after their relegation was confirmed following a defeat to Plymouth Albion.

Caldy took another huge step towards promotion to the Championship as they beat title rivals Rosslyn Park 18-17 at The Rock.

The hosts had been reduced to 14-men when Benji Marfo was sent off just after half-time, but Park did hold a 17-11 lead heading into the final quarter following Craig Holland’s try and a Harry Leonard penalty.

However, the league leaders bounced back and a wonderful line from Ryan Higginson allowed Lucas Titherington to dot down, and this proved to be the decisive moment in this absorbing National League Rugby contest.

A score from Nick Royle and three points from the boot of Ezra Hinchliffe had put Caldy 8-0 up, but Arthur Ellis’ close-ranged effort cut the lead to a single point just before the break.

Another penalty from Hinchliffe was then followed by Marfo’s red card, but despite being a man light, Park surged into a six-point lead.

But Gareth Davies's side - who have now won their last 14 matches - showed why they are at the summit as Titherington’s try sealed a monumental victory.

The win for Caldy means they are seven points clear at the top with three matches to go in their season whilst Rosslyn Park’s title aspirations are now out of their control.

Sale FC (2nd) are now Caldy’s nearest challengers after Jonathan Keep’s side secured their ninth win on the bounce by beating Cinderford 32-17.

Joe Carpenter, who was in action for Sale Sharks in the Premiership Rugby Cup last week, opened the scoring but Cinderford hit back through Mike Austin.

However, Chris Johnson, Jordan Tebbatt and Neville Edwards all crossed in the second period to leave the North West outfit firmly in the title race. Sale have a game in hand over Caldy and still have to face the table-toppers on April 23rd.

?? The National League Rugby Review Show: Round 26@WMuggleton takes you through the best tries and biggest moments from another brilliant weekend in National One and National Two ??

Cambridge remain in the promotion conversation after a battling 38-27 win over relegation-threatened Leeds Tykes.

Ben Brownlie helped himself to a hat-trick in the opening period to give the Blood and Sand a 21-10 lead before Matt Dawson claimed the bonus-point score on 54 minutes.

But Leeds Tykes showed their resilience once again to reduce the deficit to four points when both Harry Jukes and Tighe Maxwell-Whiteley scooted over.

However, two further tries from Cambridge via Joe Green and Jake McCloud sealed the win for Richie Williams's side who are nine points off the top with a game in hand.

As for Leeds Tykes, they are now nine points from safety and Blackheath are the team directly above them after ‘Club’ suffered a 24-19 defeat away at Bishop’s Stortford.

In contrast, Plymouth Albion boosted their own survival chances whilst also condemning Tonbridge Juddians to the fourth tier following a 34-21 win at Brickfields.

TJs knew they had to avoid defeat if they were going to live to fight another day in National One but they fell behind to an early penalty try which also resulted in a yellow card to Matt Foulds.

Danny Southworth, Connor Eastgate, George Mills and Ben Parsons all crossed for Plymouth and despite a penalty try and a score from Ryan Jackson, it wasn’t enough for Tonbridge Juddians to beat the drop.

In terms of Plymouth, that crucial victory now means they sit nine points clear of the trapdoor with some vital games on the horizon against both Darlington Mowden Park and Leeds Tykes.

Elsewhere in National One, Taunton Titans ran in six tries as they defeated Chinnor 43-29 in an entertaining affair at Veritas Park whilst a late penalty from Dan Lewis sealed a 27-26 win for Birmingham Moseley over Rams in a pulsating contest in Berkshire.

After seeing off promotion rivals Sedgley Park last time out, Gary Pearce’s side flew out of the blocks in the Midlands as Will Hall dotted down before the No.8 grabbed his second on 12 minutes.

Two further tries from Reece Dean and Greg Jones saw the relentless league leaders wrap up the bonus point before Mitch McGahan responded before the interval for Bournville.

Mike Adlard kept Hull well and truly in control in the second period and whilst Jonjo Fanning went over for the hosts, Laurence Cowen sealed a comfortable afternoon for the table-toppers late on.

It was a 26-22 win for @SedgleyTigers against @ChesterRUFC in @Natleague_rugby #Nat2N yesterday. There was a party atmosphere on @BootOutBC day at Park Lane - and you can hear it! RVR caught up with Tigers prop @cachilvers whose family has been impacted by breast cancer. pic.twitter.com/bGIOBGq2XU

The Yorkshire outfit remain six points clear after Rotherham Titans (2nd) dispatched Loughborough Students 47-17 at Clifton Lane. No.8 Zak Poole was the star of the show as he weighed in with a hat-trick whilst Sam Boxhall (2), Tom Lewis and George Tucker also crossed the whitewash.

Third-placed Sedgley Park also followed suit by securing a bonus-point win, but it was a hard-fought 26-22 triumph against Chester.

Sedge had led 26-8 at one stage thanks to efforts from Rhys Henderson, Matt Gallagher, Will Lees and Cashel Chilvers, but the Tigers had to survive a late Chester revival to ensure they came out on top.

Elsewhere in National Two North, Dan Rundle scored four tries as Stourbridge beat Blaydon 36-19, Fylde were able to see off Luctonians 35-22 at Woodlands despite having Henry Hadfield sent off whilst Josh Britton’s second-half score was the difference as Hull Ionians edged past Sheffield Tigers 21-17.

Meanwhile, Tynedale defeated Wharfedale 42-37 in a cracking National Two North clash and 11 points from the boot of Will Milner steered Huddersfield to a 21-13 win away at Harrogate.

Worthing Raiders’ promotion hopes in National Two South suffered a blow in Round 26 after they fell to a 22-17 defeat against title rivals Redruth.

Curtis Barnes’ early score made it a decent start for the Raiders, but a penalty try and Shaun Buzza’s effort gave Redruth a slender 17-5 lead at the break.

Fraser Honey - who had landed a penalty at the start of the first half for the visitors - failed with an attempt at the beginning of the second period and it seemed to trigger a reaction from Worthing.

A quick-fire double from Barnes made the scores level heading into the final 20 minutes, but Richard Brown was on hand to deliver the key moment in this contest as his try just after the hour ultimately clinched an important victory for Redruth.

Worthing are now 10 points off the top with four games remaining, whilst the Reds are four points adrift of league leaders Esher who beat Guernsey Raiders 57-12 at Footes Lane.

Fly-half Sam Morley was easily the star of the show as he kicked 30 points to help Peter Winterbottom’s side to a sixth win on the trot whilst third-placed Clifton came from 12-0 down to claim a bonus-point 38-24 victory away at Canterbury.

Outside of the top four, Leicester Lions have moved into fifth spot as their fabulous home form continued with a 35-14 triumph over Old Albanian. Their win in the Midlands coincided with Henley Hawks’ 40-5 defeat away at a Dings Crusaders outfit who have now lost just one of their last eight matches.

Elsewhere, Will Affleck was at the double as Bury St Edmunds cruised to a 61-0 success against Westcliff whilst Barnstaple ended a 17-game winless run thanks to a 23-14 victory over Barnes and Rochford Hundred secured back-to-back triumphs for the first time since October after beating Hinckley 33-26.