Burgess has added string to his bow 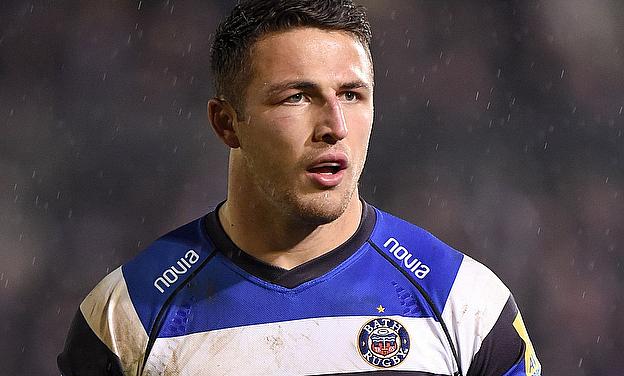 Sam Burgess's versatility to cover centre and back-row is the "added string to his bow" that can secure Rugby World Cup selection, according to Mike Ford.

Bath boss Ford has tipped the rugby league convert to force his way into England's 45-man training squad, to be announced on May 20.

Burgess started life in union at 12 in December, only to slot into the back-row in recent months in a move some feared could curtail his World Cup hopes.

The 26-year-old himself admitted he would always put his hand up for Test selection, happy to switch between centre and blindside flanker as required.

"When we moved Sam to six I was pretty much certain Stuart Lancaster would pick him in that wider squad regardless of where we were playing him, because of his leadership qualities.

"Now though I think Stuart looking in will probably think this is an added string to his bow that enhances his selection - because now he has proved he can play two positions.

"That gives you the option to have six forwards on the bench, because Sam can cover the backs as well."

Former England defence coach Ford always felt Burgess would be best suited to the back-row in union, after joining Bath from South Sydney.

Now Ford believes Burgess is settled enough in his new code to transfer the prodigious graft that set him apart as one of the NRL's top talents.

"He has a phenomenal work-rate - the other week he made 46 plays in 62 minutes," said Ford.

"Francois Louw (Springboks flanker) is top of that every week, he tops those numbers, but he was 41 after 80 minutes.

"That's what we saw in Sam when we brought him over from South Sydney.

"And the way we're trying to play with ball in hand, he understands it a lot better than some of the others (Bath back-rowers), in terms of the chaos attack.

"He's a leader: when you go through the periods where the opposition are on top he doesn't panic.

"He stays tight; he gives the right chat to the players, telling them to see it through and not to worry.

"He'll say 'give me the football, I'll make that tackle'."

Burgess now considers attempting to crack the new union code a tougher challenge than making it big in Australian rugby league when most locals love to see British ex-pats fail.

The gritty Bath recruit was a full-blown England star in league before securing world superstar status and leading South Sydney to the 2014 NRL title.

After starting from scratch in union with Bath, he is in little doubt as to the harder task - but believes his six-month immersion could just be enough for a shot at World Cup selection.

"I would never say 'I don't think I am ready'," said Burgess when asked if he feels prepared to chase a World Cup spot.

"I would always put my hand up.

"There's plenty of time prior to everything kicking off but all that's out of my control at the moment.

"I will focus on what we are doing here at Bath. I don't know what Mike Ford or Stuart Lancaster might have said but I will crack on with what I am doing here and let that take care of itself.