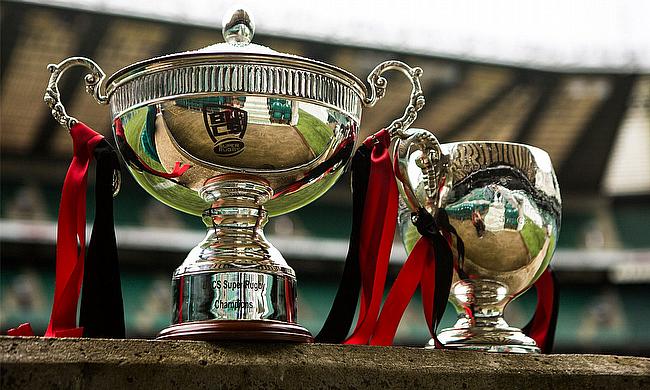 Who will get their hands on the BUCS Super Rugby trophies this year!?
©BUCS

Hartpury College’s goal is “to maintain their two trophies” this season as the champions of university rugby look to stay on top of their perch.

The ambitious College side, who lost just twice last term, launch their title defence at Loughborough in Round Two in the first week of October.

And new captain Tom Pashley is keen that the Gloucestershire side maintain the standards they set last year as they bid to continue their dominance in university rugby.

“The atmosphere has been class so far amongst the boys,” said Pashley, who was speaking at the BUCS Super Rugby season launch at Twickenham earlier in the month.

“There is a real buzz from last season and it has continued into this season. For us, we are expecting to keep the standards high and obviously, there is quite a bit of pressure from last year after winning the league and the cup.”

“Last year, was a dream come true. Winning at Twickenham was a memory that I will keep for the rest of my life. It was an honour and now there is a lot of pressure for us to maintain the two trophies. We will be taking each game as it comes, but the goal is to keep hold of those trophies.”

Hartpury Coach Sean Lynn added: “Last year, you could see the standard was definitely National One and some of the guys have been playing A League too and the benefits you can see are massive to help that student/athlete approach.

“I think our first fixture against Loughborough away is something we are really excited for to get BUCS off to a good start.”

Lynn will be more than aware that his side that clinched glory last year by beating Exeter 27-24 in a thrilling final at Twickenham will be under more pressure from the other top sides in this division this term.

Their first opponents, Loughborough, will certainly have a point to prove after a campaign which saw them finish third in the inaugural Super Rugby table and reach the last four of the BUCS Championship.

If they could gain a win against the defending champions next week, then it would be a brilliant start to the season for the Midlands side, who narrowly missed out on the trophy in 2016.

But while champions Hartpury still have the talents of Sam Lemming and Jamie Forrester in their ranks, they will not be taking anything for granted with some followers of university rugby tipping Exeter for the title.

The 2016 champions began their Super Rugby campaign very slowly, but clicked into gear as the season progressed, winning 12 of their 13 matches on their way to the final.

Boss Keith Fleming will no doubt have a talented squad at his disposal, including some of the Exeter Chiefs’ emerging stars, when they begin their season on Friday away at Nottingham Trent.

Bath will be aiming to push on past the final four this season and they very nearly achieved that last term. A narrow semi-final defeat to Hartpury was heart-breaking for Will Britton and co, but they certainly have the talent to progress this year. Elsewhere, Durham will be aiming to finish in the top four once again in BUCS Super Rugby while Northumbria and Cardiff Met  will hope for strong seasons.

Last year was such a disappointing campaign for Leeds Beckett who lost all 14 of their domestic Super Rugby games, so they will certainly need to improve especially with the introduction of a ninth team into this division – Nottingham Trent.

A two-legged victory over Bristol back in April secured their place in university rugby’s top division and Captain John Hargreaves insists he and his teammates are ready for the challenge.

“I think from us you can expect to see a fluid brand of rugby and playing in the right areas of the field,” said the 2nd year Business Management and Marketing student.

“We have about 14 lads who are playing for Nottingham in the Championship so to have them integrating in with the university squad compliments us well.

“Going into the new league is exciting for us and we just want to get our teeth into it. We begin the season against Exeter on a Friday night and we are really looking for to it.”

“We will be just looking to take it one game at a time because what we achieved last year was massive and we now can’t wait to get going.