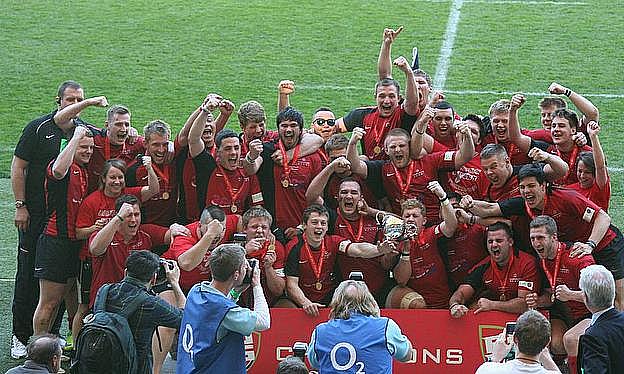 Can Hartpury lift the BUCS trophy once again?
©TRU

The BUCS Rugby Championship will culminate this Friday in a fantastic finale under the lights at Twickenham which will see the men’s and women’s rugby champions for 2014 crowned.

Leeds Met women’s secured a top spot finish in BUCS Premier North League after winning nine of their ten fixtures this season, including a huge winning margin of 128-0 against University of Birmingham.

Cardiff Met women’s finished a strong season top of the table winning all their BUCS Premier South League fixtures without conceding a single point in five of their fixtures.

In the knock out stages of the BUCS Rugby Championship both Leeds Met and Cardiff Met received a BYE into the quarter finals.  With a convincing win of 86-0 against Oxford University Leeds were into the semi final to face Gloucestershire. Another strong performance against Gloucestershire saw them win 43-12 to see them into their fifth final in six seasons. Cardiff Met faced University of Newcastle in the quarter final continuing with the dominance they showed all season in a 92-5 victory. Cardiff Met once again secured a convincing win against 2013 champions University of Exeter 50-7 to see them into the finals.

The players to look out for from Leeds Metropolitan include Fiona Davidson, scrum half for England who has also represented England at U20 level and on the sevens circuit, and Claire Garner, a fly half who has reached U20 level for England and is a current Sports Scholar at the University.

Looking ahead to the Final, former Leeds Met player and current England international Emily Scarratt believes that the experience in their ranks will be really important on the day.

“They’ve (Cardiff Met) got a fairly stacked team it’s fair to say, but with the likes of Claire Garner and Sarah Clough who have been around a long time, Leeds Met have a lot of experience. They will just have to use all of their experience in what will certainly be a very difficult game. It should be a good spectacle for women’s rugby!”

The key players to watch for Cardiff Met include Kay Wilson, the utility back with 26 caps for England who can play at centre, full back or on the wing, and prop Sasha Acheson, a strong ball carrier who made her England debut against France in November. Speaking ahead of the Twickenham showdown, Acheson said that she is really looking forward to the Final and that Leeds Met will be strong opposition. “I am really excited about another Cardiff Met v Leeds Met final, as its how it always used to be in years gone by, so in my final year it’s exciting that it’s another north-south showdown! Leeds Met always proves to be very physical, with pace out wide, and they are a team who always provide a lot of talent and prove a really good match for our girls.”

Leeds Met and Cardiff Met have a long history in the BUCS Rugby Championship Finals which saw Cardiff Met come out on top to lift the trophy in their last three head to heads.

Since the women’s competition began in 1985, Cardiff Met have won the Championship seven times, starting in 2002, with their most recent victory coming in 2012 when they defeated their opposition this year, Leeds Met, by 30-5. From 2006 to 2010, Cardiff Met formally UWIC secured five consecutive victories in the Championship final at Twickenham, a feat that had not been achieved previously by any other men’s or women’s side in BUCS Rugby history.

Leeds Met men finished top of the BUCS North Premier League two points ahead of Loughborough. A strong finish on the road with wins against Newcastle, Northumbria and a 57-24 victory over local rivals Leeds saw them through to the knock out stages of the BUCS Rugby Championship.

In the knock stages of the BUCS Rugby Championship Leeds faced Bath in a close fought quarter final, whilst Hartpury faced Northumbria with a strong performance seeing them through. Into the semi finals both teams showed their dominance with Leeds defeating Exeter 42-18, and Hartpury beating Loughborough 31-15.

Speaking about their season and reaching the final Leeds Met Captain Will Cargill said “The season started well with a good win at varsity. We had three early wins in which really kick started our season and we started to play some enterprising rugby. Playing at Twickenham is going to be a great experience, one that I can’t wait to share with this team. We are going to prepare well, we won’t change anything that we do. It’s important we stay focused and not let the occasion get to us.”

On reaching the finals Leeds Met Director of Rugby, Colin Stephens said “It’s a great achievement, our women’s team have been there 5 out of the last 6 years which is great. The boys missed out in an epic semi-final against Loughborough in 2009 so to finally get there for the first time in our history and to have the women’s team there as well it will be a great day for the University”.

UWE Hartpury are no strangers to Twickenham having won the BUC Rugby Championship title in 2008, 2009 and 2012. Last year they reached the final only to lose out in close match against Durham.

Talking about their semi final win over Loughborough Hartpury captain Nathan Taylor said, “It was one of the best games we’ve played all year. Fair play to Loughborough they we’re a physical side but I believe that we matched them and overall we came out on top. It’s a great feeling to get to the final, it’s amazing. In the huddle after the semi final the boys were buzzing. It’s going to be a tough weeks training but we can’t wait to get there. “

Speaking about the BUCS Rugby Championship television presenter and BUCS president John Inverdale said “University rugby is probably the most fun you will ever have. A lot of my best friends to this day are people from Southampton University rugby. For those playing in the BUCS final it may be the high point of their entire rugby career.”