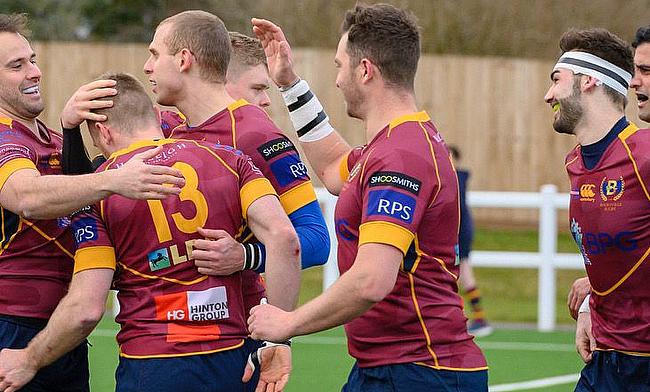 After wall-to-wall rugby over the last 12 months, including a feisty British and Irish Lions series, there seems to be an air of calm over the sport.

Yes, the best in the southern hemisphere are currently going head-to-head in The Rugby Championship, but on these shores, everyone is taking stock ahead of the new season.

However, for those involved in the National Leagues, preparations for a fresh campaign are quite rightly causing a stir.

The last offering of action provided by the third and fourth tiers of English rugby came in March 2020 but since then, National One and National Two have been left in the shadows shaped by the coronavirus pandemic.

But after a couple of false dawns last season, the National Leagues are back in the spotlight and for some teams in particular, the opening day of the new term cannot come soon enough.

Great to catch up with and meet (via phone) @joeharvey34 @nca_rugby & chat to them about @BvilleRFC season & an insight into our history! Really looking forward to the challenge ahead of us in the National leagues (whenever we start again) https://t.co/lw9S6rPYvG

Newly-promoted Bournville certainly fall into that category as the excitement builds towards their first-ever campaign in level four, which begins in just over two weeks time.

The last 18 months haven’t been meaningless for the Midlands club, either. In fact, it has enabled them to fine-tune their preparations for their maiden bow in National Two North.

“If you had asked me 12 months ago, I think I would have said to you we’d be a little light going into the season,” Bournville Head Coach Mitch McGahan told TRU.

“We lost two boys in January 2020 to ACL’s in the same game and funnily enough, they are now both back so having a year out has actually benefitted them in terms of doing an ACL and only missing five games of rugby.

“I think in a way it has been really good because we have had 18 months to plan for this new season now. Normally you would finish in April and start playing again in August so we would have been talking four months to try and plan for something that you have never done before.

“Now that we have had a little bit longer, we feel as a club we are better prepared than what we ever could be. Our recruitment and blend in the squad has gone well, but it is now a matter of getting stuck into the thing!”

Without a doubt, the Birmingham-based club are straining at the leash to get a new, competitive season underway at the Avery Fields.

Back in March last year, Bournville were actually the first side to be promoted from the fifth tier having stormed their way to the Midlands Premier title. Following the calculations conducted by the RFU to determine final league standings due to the curtailed season, McGahan’s men finished a whopping 21 points clear of nearest rivals Newport (Salop).

With that in mind, Bournville should command the respect they deserve despite being the new kids on the block and having begun pre-season with wins against Burton and National Two South outfit Leicester Lions, the club seem to be in a good position to attack the new campaign.

And off the pitch, Bournville are also putting things in place to help them deliver the desired results as the club has bought a camera from Veo, a global leader in AI-powered sports recording and analysis.

They use two 4K lenses to capture 180 degrees of the pitch to make sure teams never miss a moment. Their affordable and portable solution uses AI to track the action meaning that clubs like Bournville can capture training sessions and matches without the need for a camera operator.

The Midlands side have been putting this to good use in pre-season and their Veo camera will be deployed once again when they host Hinckley on Friday night in their latest warm-up fixture.

“With us moving into National Two, we had a look around at different options but the big thing with Veo is that it films the game itself,” McGahan said. “All you have to do is set it up and away it goes. I think it takes away that worry of whether it is being filmed correctly.

“It then uploads to the Cloud and the big thing talking to Veo was that they begin to cut up and edit things for you through your AI. All your tries, conversions, line-outs are done for you so that is a lot of legwork taken out rather than sifting through footage on a Sunday morning!

“I think it also allows us to focus on the smaller details in actual gameplay because we have more time to look at things we might not have been able to in the past. Now stepping up a level, there is probably a little bit more detail underneath that needs to be added into those conversations coaches are having with the boys and what we are looking for.

“Having the technology there for us to be able to go to the players and show them their work-ons is going to be good for us. That is going to drive the coaching set-up, but also drive the player standards because all of a sudden, they are thinking, ‘Big Brother is watching here! I better get moving quickly!’

“On a serious note, this approach could help us become an established National League team rather than being a yo-yo club so it allows us to grab this opportunity with both hands.”

And it is nearly time for Bournville to grab that opportunity as the National Leagues prepare to deliver yet another rip-roaring campaign.

?? They stormed their way to the Midlands Premier title in 2020 and now it is just 52 days until @BvilleRFC kick off the #Nat2n season ??

?? Want to see more tries like this? Then subscribe to The National League Rugby Review Show: https://t.co/bi0QOiOhRo pic.twitter.com/b8rEUlko6U

McGahan’s side begin their National Two North adventure with a trip to Huddersfield on September 4th and their opening month of the season also includes fixtures against Rotherham Titans and Wharfedale. A derby day date with Stourbridge in November is another fixture that Bournville cannot wait for.

“I think a lot of people associated with the club have all booked in to go to Huddersfield,” McGahan said.

“They are all looking forward to it and for a lot of people, they will be going to these places for the first time. It is a chance to make friendships which is equally why we play the game.

“During the first month, there are some big landmark fixtures on the horizon. Our last game of the month is against Wharfedale and the week before, we are up to Rotherham, which will be massive because you expect them to be frontrunners in the league. That is going to be a great test for our boys and a great experience going up there.

“For us, it is about establishing ourselves up here and testing ourselves against some well-established National League teams. There are some teams with some really good history that we will be coming up against for the first time and we will also have a couple of ‘local’ matches that we haven’t had for a while like against Stourbridge. Those two matches are in the diary and the old boys are really looking forward to that!

“For us, it is all about learning because it is going to be an unknown but we want the boys to go out and equip themselves well against some of the best teams in the National Leagues.”