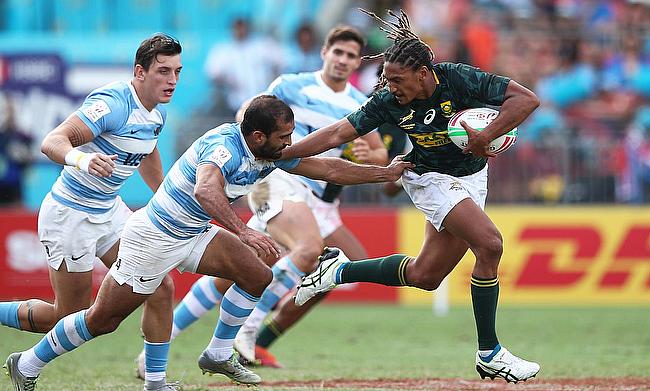 Dubai and Cape Town legs of 2020/21 World Rugby Sevens Series cancelled
‘Afterwards it felt like I had played in a World Series sevens event!’
New dates for Rugby Sevens in Tokyo Olympics announced

South Africa Sevens were officially handed the silver medals after the remainder of the 2019/20 season was cancelled following the pandemic coronavirus.

The Blitzboks finished second in the table with 104 points after the opening six rounds behind the winners New Zealand. The final four rounds in London, Paris, Singapore and Hong Kong were cancelled following the outbreak of Covid-19.

SA Rugby’s deputy president, Mr Francois Davids, did the handover of medals to the squad in Stellenbosch earlier on Monday.

“The pleasing part is that it shows that some of our planning – with the postponed Olympics in Tokyo as the end goal – was successful and can be copied when we do it all over again for the 2021 Games,” said South Africa Sevens head coach Neil Powell.

“The physical medal around the neck also gives the players the comfort that their hard work was not for nothing.

“The tournament wins in Dubai and especially Los Angeles were remarkable and even the two final defeats, in Cape Town and Sydney, hinged on one or two plays only.

“I also have to congratulate our management, who was part of the planning and execution, as it remains a team effort from all involved.”

Meanwhile, the Dubai, Cape Town, Sydney and Hamilton legs of 2020/21 season of World Rugby Sevens Series were also cancelled with restrictions in place across various countries.