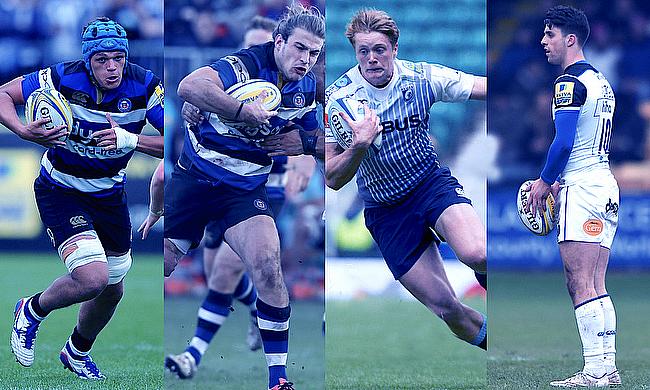 Todd Blackadder’s arrival at Bath has seen a notable shift in form that is a stark contrast to the season the club endured under Mike Ford last term, and his selection policy has proved one to be admired.

A miserable year at the Recreation Ground saw the West Country side finish ninth in the Premiership table, subsequently leading to the end of Ford’s tenure at the club, despite having reached the final just one season previous.

But while it’s easy to focus on their upturn in fortunes, Blackadder’s putting his faith in a number of Bath’s young guns this season - something that will have been easy to miss given how seamlessly they’ve slotted in to their first team responsibilities.

Perhaps most impressive of all has been the rise of Zach Mercer, who has been permitted to play for England during their under-20s Six Nations campaign having racked up 400 minutes of Premiership action so far this season.

The versatile back row forward made his breakthrough for an injury-ravaged Bath earlier in the season and hasn’t looked back since. While New Zealander Paul Grant was also brought in to provide loose forward cover, Mercer has been able to contest a starting berth since first making his mark.

The 19-year-old is currently on international duty and will be looking to win the under-20s Grand Slam, having captained the side to their third win from three on Friday night – a comfortable 49-0 victory over Italy in which Mercer scored his first try. In fact, Blackadder has been so impressed with his performances that he’s confirmed reports that Mercer will be offered his first senior contract at the end of the season.

After an impressive performance against Pau in the Challenge Cup, Blackadder told the Bath Chronicle it was “one of the most complete games from a number eight” that he’d seen in a while. Big praise from the former All Black.

Mercer isn’t alone in being offered a new-and-improved deal however, with centre Max Clark also earning the right to sign on the dotted line. The young centre plunged himself in at the deep end by scoring a vital try in Bath’s 14-11 win over reigning Premiership champions Saracens late last year, and has gone from strength to strength since then.

Despite making a handful of appearances last season under departed coach Ford, Blackadder has also shown faith in the youngster by continuing to blood him in to first team duties. His two Premiership tries this season have been scored in eight appearances, with injuries prohibiting his playing time.

His ascent to stardom has, however, softened the blow of losing towering centre Matt Banahan to a posterior cruciate ligament injury, from which the 6-foot-7 back is still recovering, allowing Clark to continue impressing his coaches. And while he is too old, at 21, to be playing age grade rugby for England, Clark is proving his worth in the international period, scoring Bath’s only try in a vital win over fellow playoff chasers Harlequins a week ago.

But with one brute of a back on the sidelines in Banahan, another has stepped up from the academy in Harry Davies. Although three inches shorter than Banahan, at 6-foot-4 with a stocky build, he certainly cuts the shape of a more modern winger, capable of bullying his way through tackles rather than using vivacious footwork to evade them.

The Welshman made his fifth appearance of the season in yesterday’s trip to basement side and local rivals Bristol, going close on two occasions, only to be hauled in to touch on both. His first Premiership start for the club came in uncertain circumstances against Harlequins when he was drafted in to the starting lineup in the buildup to kickoff following an injury in the warm up. He wasn’t fazed though, putting in notable performances both in attack and defence to justify the faith Blackadder had showed in him.

Something young players must do though, is bide their time – something highly rated fly-half Adam Hastings has chosen not to do, having opted to return to his native Scotland as of next season. The replacement of the outgoing George Ford with someone of Freddie Burns’ quality, as well as the retention of Rhys Priestland, means the 20-year-old would most likely have remained as a third-choice option for Blackadder.

Hastings has, instead, opted for what will more than like be a second-choice role at outside half for Glasgow Warriors, rather than remain at the Rec – a decision that Blackadder understood, saying it was important for his development as a player. Having broken through during last season’s Six Nations, the Scot’s domestic playing time has been restricted to just 71 minutes from two cameo appearances off the bench, and even then he was behind Tom Homer in the pecking order for goalkicking, meaning his is yet to open his account in the Premiership this season.

The West Country outfit’s impressive Bath United setup has certainly produced its fair share of first team stars over the past few years. Bath-born scrum-half Chris Cook had a remarkable season in 2015/16, asserting himself as a first-choice player before Kahn Fotuali’i joined the club. Club captain Guy Mercer and Kane Palma-Newport also came through the academy, along with now ex-Bath finisher Olly Woodburn.

And they’re still producing top level talent to this day. Beno Obano, the cousin of a certain Maro Itoje, has regularly featured in the first team this season, as too has back row forward Levi Douglas. The future looks bright in Somerset, and the Bath youngsters certainly have a coach who is willing to put faith in them when it comes to the big time.