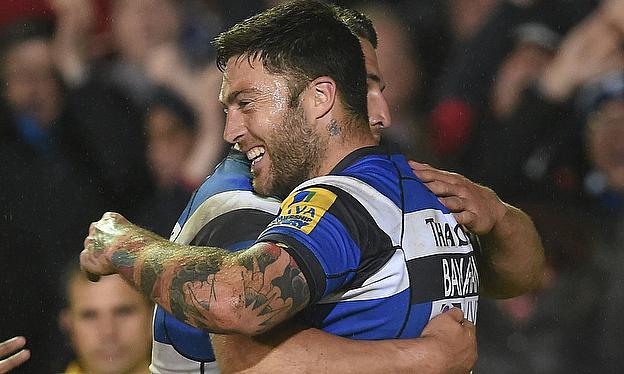 Bath will meet Saracens in next Saturday's Aviva Premiership final after three Matt Banahan tries helped send them to Twickenham for the first time since 2004.

And it was former Ireland international Peter Stringer, on his final home appearance before joining Sale Sharks next season, who sealed the deal with a try 16 minutes from time that Ford converted, before Ford went over himself, then Banahan completed his hat-trick and Anthony Watson rounded off a 47-10 rout.

Ford's six conversions and a try gave him 17 points as Bath prevailed emphatically, just eight months after Leicester were humbled 45-0 on the same ground.

The Tigers were infinitely more competitive than they had been on that occasion, but fly-half Freddie Burns missed four penalties, with his only successful kicks being a first-half penalty and conversion of hooker Tom Youngs' 40th-minute touchdown.

Bath successfully overcame a worrying spell when they had full-back Watson and number eight Leroy Houston sin-binned two minutes apart and they will now head to Twickenham 11 years after being beaten by Wasps in English rugby's domestic showpiece.

Leicester battled hard during a feisty forward contest, with Youngs, prop Dan Cole and flanker Ed Slater at the hub of their best efforts, yet Bath possessed a definitive edge in terms of back-division sharpness.

Banahan hat-trick was the result of superb approach by England backs Ford, Joseph and Watson, while Eastmond finished majestically following wing Semesa Rokoduguni's show of pace and power and Stringer, Ford and Watson sprinted over unopposed.

Leicester must now reflect on a trophy-less campaign, but Bath are 80 minutes away from potentially landing their first Premiership title.

Skipper Stuart Hooper returned for Bath after missing the last two games because of injury, while Ross Batty was preferred to Rob Webber at hooker and reformed his midfield partnership with Eastmond.

Leicester replaced injured prop Logovi'i Mulipola with Marcos Ayerza as they looked to book a 10th Premiership final appearance in the last 13 years.

Conditions were perfect for Bath's gilt-edged back division to showcase the type of rugby that had produced 72 Premiership tries before kick-off this season, and it took just 90 seconds before the Leicester defence was shredded.

Ford made initial headway, then Joseph tormented the Tigers in midfield before delivering a scoring pass to Banahan, who galloped over for a try of simplistic brilliance.

Ford converted from the touchline to make it 7-0, but Leicester responded impressively by taking play deep into Bath's 22, yet Burns missed a straightforward penalty chance.

Burns then had a second opportunity to open Leicester's account, but he hit the post from longer range before eventually finding the target after 24 minutes.

The Tigers showed far more resilience than they had on their last Recreation Ground visit earlier this season, yet they were undone spectacularly by two more Bath tries during a devastating five-minute burst.

Banahan claimed his second touchdown after Ford and Joseph combined again to send him clear, then Leicester were punished following some hapless defensive work by wing Vereniki Goneva, who could not lay a finger on his opposite number Rokoduguni, whose kick ahead was gathered by try-scorer Eastmond.

Two more Ford conversions made it 21-3, only for Leicester to enjoy a temporary two-man advantage after Watson and Houston received yellow cards in quick succession after referee JP Doyle ruled they had committed technical offences.

Leicester should have scored a minute before the break, but full-back Niall Morris spilled possession under pressure from a Rokoduguni tackle as he dived over the line, yet there was enough time for Youngs to claim a close-range score that Burns converted as Bath's advantage was cut to 11 points.

Burns missed another penalty just after half-time and Leicester then lost Morris, who was carried off after appearing to suffer an ankle injury. He was replaced by Tommy Bell.

Burns' kicking woes continued when a long-range attempt again had the distance, but lamentable accuracy, and with Bath restored to 15 players they looked to reassert their earlier dominance and seal a place at Twickenham.

And they finished in style, with Stringer, Ford, Banahan and Watson administering the knockout blows to Leicester, and Bath's celebrations ahead of a day out in south-west London next weekend could begin.