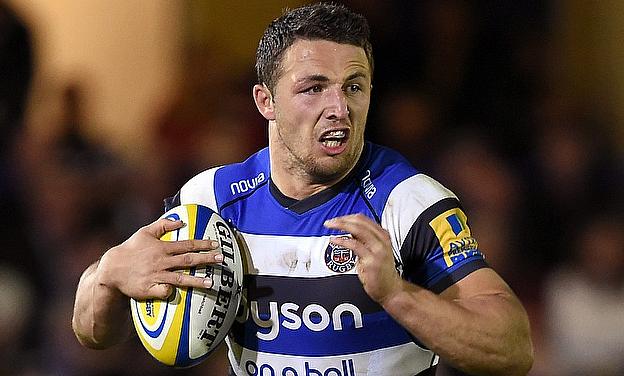 Mike Ford believes Sam Burgess is ready for Test match rugby as a flanker despite just four Aviva Premiership appearances in the back row.

World Cup hopeful Burgess should be named in England's 45-man wider training squad on Wednesday, before facing up to Leicester Tigers in Saturday's Premiership semi-final.

The 26-year-old only switched from centre to back-row last month - and from league to union in December - but Bath boss Ford has backed the former South Sydney sensation to feature in the England pack.

"Do I think he could play international football at six now? Yes I do," said Ford.

"You have a look at the work-rate and what he does with his carries, tackles and hitting rucks, it's very good."

Former England defence coach Ford expects Lancaster to hand Burgess his Test debut during the summer's World Cup warm-up Tests, and again pushed his case as a flanker not a 12.

Burgess claimed a try as Bath completed the regular Premiership season with a high-octane 50-30 west country derby victory over Gloucester at The Recreation Ground last weekend.

Ford believes another workaholic performance against the Cherry and Whites is further indication that the back-row is the place for "the real Sam Burgess".

"He's still learning; his work-rate again at the weekend was phenomenal," said Ford.

"But his try at the weekend, close your eyes and that's the real Sam Burgess.

"The way he hit the line, the way he fended and then he stepped the full-back to go over the line, planting the ball down one-handed.

"That's what I envisaged what I first signed him, those sort of lines and that kind of running.

"We've had him in there one-on-one with (Bath coaches) Toby Booth and Neal Hatley, and they've gone through bits and pieces where he can improve again.

"And that will be always ongoing. You can say what he can't do and what he struggles with, the line-outs the mauls and maybe the technicalities.

"But you've also got to look at what he can do, and working with him every day Stuart Lancaster and the coaches are going to see a leader, a true leader, who is selfless, the first word out of his mouth is always team, who has the ability during the pressure games to say 'give me the ball and I'll do what I have to do for you' and keep that control and perspective."

England will continue to deliberate over the problem number 12 position, but Bath head coach Ford believes Lancaster should be in no doubt as to his ideal outside centre for the World Cup.

Despite a stunning campaign from the ex-London Irish star, Ford believes Joseph has revealed just "the tip of the iceberg" on his irrepressible talent.

"It's staggering the potential this team's got and Jonathan's a big part of that.

"He figured it out this time last summer; he didn't get on the New Zealand tour, that hurt him.

"He looked at himself in the mirror and he came back to training to get better every day, and that's tough.

"I remember us doing nine fitness sessions in pre-season, and he won all nine.

"Not only did he not get injured or drop out of any, every day he turned up and won all nine.

"And he's just carried on, kept coming to training, through the 47 weeks from pre-season.

"To come every day with the mentality to try to get better, not being injured, getting some treatment then going out and doing it again: it's habitual for him now.

"Not only that but he's done it on a matchday as well.

"What he did for England in the Six Nations, I think it's only the tip of the iceberg with the kid."