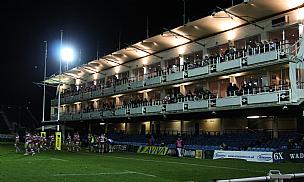 The 2013 Heineken Cup final will be played at the Aviva Stadium in Dublin-the first time the match has been played in the Irish capital since 2003, when Toulouse defeated Perpignan at the Old Lansdowne road.

Irish sides have won three of the last four finals after Munster lifted the cup in 2008, followed by Leinster in 2009 and 2011. In Leinster's triumph this year the Aviva Stadium played a big part, as they beat Leicester and Toulouse on their way to winning the tournament.

This year's final was played at the Millennium Stadium in Wales, while Twickenham has already been chosen to host the 2012 final, meaning that the European showpiece will take place in the British Isles for the third year running.

With that in mind, is this the right decision or should the final be played in different areas of the world?

There is no question about the quality of the venue, it's a world-class stadium with great facilities and it has already played it's part in some great Heineken Cup matches.

Also the decision to bring the final back to Dublin seems fair as the Irish fans are some of the most passionate around the world, with most following the Heineken Cup every year. It will provide another big venue too, 50,000 fans can fill into the Aviva Stadium, which will provide a very special atmosphere.

A new solution may be a voting system, which would see representatives in European rugby vote for what stadium they would like to see the final being played at. The only issue maybe corruption, which has currently caused lots of problems in football.

The chance to take the Heineken Cup final to different places will make the tournament even more exciting and will give the chance for more people to start following it. It seems like a simple decision, but the organisers of the tournament will want to make money and they will see this money being made in the areas already mentioned.

For now, European Chief Executive Derek McGrath has spoken of his delight in bringing the final back to Dublin.

He said: "Ireland has provided four Heineken Cup champions in the past six seasons and Irish rugby is steeped in the history of the tournament since it began 16 years ago.

"The decision of the ERC Board to bring the Heineken Cup final back to Dublin is further recognition of the passion that Irish fans have for the tournament. 