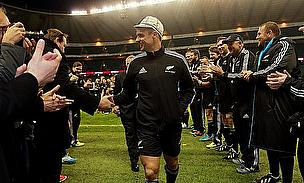 Dan Carter - The Missing Man
Should Overseas Players be Eligible for the All Blacks?

The All Blacks selectors have named their team for The Rugby Championship 2014 with three changes from the June Internationals team.

The squad seems weak at hooker and world beating at 10. Some strong performances in Super Rugby would appear to have been overlooked but to quote our reporter, Scott Donaldson, "It is predictable."

As expected, Dan Carter, Sam Cane and Charles Piutau return to the All Blacks squad, while Steven Luatua replaces the injured Victor Vito and will provide cover as loose forward and lock. Players unlucky to miss selection are Crusaders Matt Todd, Ryan Crotty and Colin Slade.

The selectors are also including Chiefs hooker Nathan Harris in their training, while Crusaders prop Joe Moody is included as cover for veteran Tony Woodcock.

What do you think of the All Blacks 2014 squad for the Rugby Championship?

Scott Donaldson tells TalkingRugbyUnion, "I think it is predictable, but it is ironic that Slade, Crotty and Todd have been in the best form of their careers this season, but get left out.

"It shows the depth of New Zealand rugby."