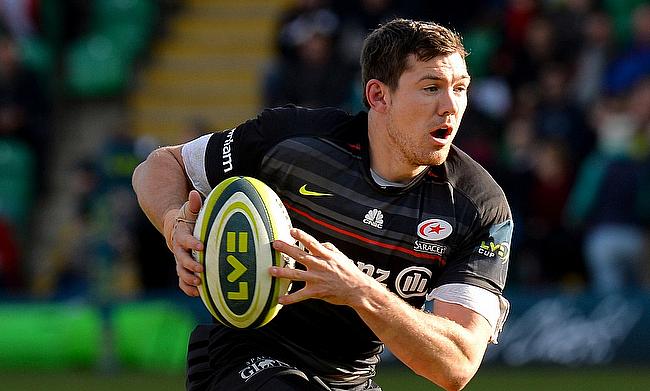 Alex Goode has been with Saracens since 2008
©PA

Saracens full-back Alex Goode is confident of stepping up in the absence of England captain Owen Farrell in the upcoming European Champions Cup quarter-final game against Leinster.

The match on Saturday at Aviva Stadium will be Saracens' biggest game of the season after they face automatic relegation in the Gallagher Premiership for series of salary cap breaches and they will be up against a rampaging Leinster side, who recently clinched the Pro14 title.

Mark McCall's side will be without Farrell as he face a five-week ban after being red-carded during the Premiership game against Wasps leaving Goode along with Manu Vunipola possible options for the fly-half role but the 32 year old is unfazed by the challenge ahead.

“Owen’s would be pretty hard shoes to fill, but Manu’s been fantastic this year, he’s stepped up brilliantly,” said Goode.

“If it were me I would just try and play it in my own way really, just try and control the team and lead them around the place.

“But you can’t compare anyone to Owen, he’s a special player. But the next person, whether me or Manu, will put our best foot forward, and go on and have a good game.

“I haven’t really read into how much the situation with Owen’s been talked about if I’m honest, maybe that’s just a bit naive!

Despite Leinster's success in the season, Saracens themselves have been dominant in the Champions Cup after winning the title three times in the last four years and Goode feels the club is upbeat of the challenge ahead.

"When you get to the Champions Cup full-stop there's a special atmosphere around the club, it's a tournament that we love and take a lot of pride in," added Goode.

"Given our record over the last four, five years, there's just a buzz around the game full-stop. They are a wonderful side obviously and we have a lot of respect for them.

"They are a top team, but it's a special group here, still. And we want to make sure we turn up and put our best foot forward.

"We know it's a huge challenge, and we're very aware of that. But we've always prided ourselves at this club on the next person to step into the club to make sure he wears it with pride and does a job like a Saracen. And that's what we expect at the weekend."