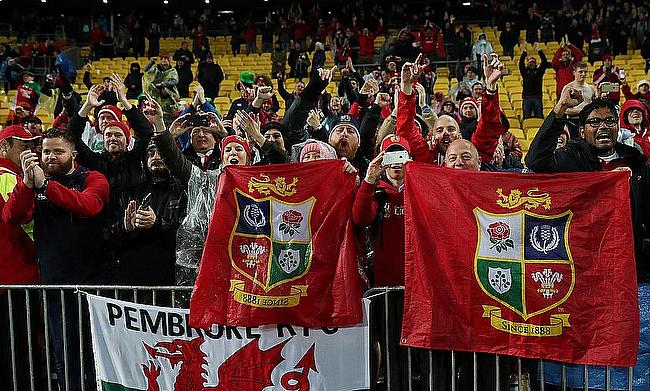 Murrayfield to welcome 16,500 spectators for British and Irish Lions' game against Japan
The ‘siege mentality’ and support from afar that will guide the Lions
"Durability” was a prime factor in leaving Johnny Sexton out - Warren Gatland
Red letter day: How determined Chris Harris turned things around to roar like a Lion

It might not be the full shebang for the British and Irish Lions’ first warm-up match, but BT Murrayfield will be hosting 16,500 fans for their pre-tour curtain-raiser against Japan.

Due to Covid restrictions, the Scottish Government have said less than a third of the capacity [67,000] will be able to attend in June, but when you look at the positives, the fixture will be the first international rugby match staged with spectators at Murrayfield since March 2020.

This, of course, will be the only opportunity for supporters to watch the Lions in the flesh with the tour games and Tests in South Africa set to be played behind closed doors.

UK-based fans have known for a while they would not be able to travel to the host nation this summer, but there was still some hope that local spectators would be able to attend the Lions’ eight fixtures.

However, as reported last week, the country’s ‘National Coronavirus Command Council’ confirmed that the South African Union are continuing to plan for matches to be played in empty stadia.

The revised schedule for the tour is a huge setback for South Africa’s economy as over 30,000 tourists were expected to flock to the nation to watch the world champions take on the Lions.

With the Springboks only getting the opportunity to face the Lions once every 12 years, the absence of fans is a major blow for the country.

“It is tough,” Sisa Ntshona, CEO of South African Tourism, tells TRU: “Essentially, you spend years getting prepared and getting ready to host this magnificent sporting event and it does feel like you have had the carpet pulled from under you, but it is what it is at the moment.”

Reports have suggested the estimated cost to the South African economy could be in the region of £330m. Back in March, SA Rugby also stated that there would be “serious financial implications” if the series was to be played with no supporters present.

The Lions and SA Rugby have confirmed the fixtures for the #CastleLionsSeries.

Every match of the Tour will be played in Gauteng or Cape Town, and the @LionsRugbyCo have replaced the SA Invitational team.

The triumph that was the 2009 tour- combined with the success of the 2010 FIFA World Cup - obviously provided huge boosts to the country’s economy, but with the current regulations which are in place, companies such as South African Tourism have had to cope with the ever-changing times.

“We have had a lot of enquiries about what to do next,” Ntshona said. “The world is not ready to travel long haul at the moment whether you have got a vaccine or not. I think once things start to move along, it will start to improve. We are not so much seeing cancellations from our side, but rather postponements further down the line and we will obviously take that.

“The opportunity cost is great to things like airlines, for example. All those seats aren’t going to be booked now and then you look at our hotels, restaurants, bars etc so that total is quite significant.

“Just speaking to some hoteliers, they had bookings for people travelling and essentially a lot of those are not going to happen. It is a big let down because we have built this up for so long, but we are where we are at in very different times.”

The adjustments to the Lions’ itinerary because of the pandemic means all of their games will be played in the province of Gauteng and in Cape Town.

Despite all of the disruption, Ntshona understands why the tour is still going ahead this year and South African Tourism have decided to try and put a positive spin on the Lions’ visit even though a major element of the experience will be missing.

“For us, we have really had to do a lot of pivoting and really refocus on what we want from this tour,” the company’s CEO adds.

“Of course, we are not going to get the typical tourism where you have stadiums full with tourists coming from the UK and from all over the world. Basically, we want to use the maximum capability of the tournament itself more as a showpiece in terms of what South Africa has in store.

“What is key for us is that we don’t want to be forgotten as a destination in the eyes of travellers around the world. This summer, eyeballs will be on our country and the rugby will be played in the backdrop of a beautiful country. If and when tourists are able to come but not go into stadiums, we are hopeful they will get the best of both worlds because even though we love our rugby over here, a rugby game is only 80 minutes and there is still so much to see and do.

“The world is slowly and cautiously trying to open up in terms of limited spectators and things like this. I say cautiously because it is almost like a litmus test that will start to re-engage confidence around the world, but we know 100 per cent that safety has to come first. That is the premise we have to work on, but we hope people who have planned their trip to South Africa will still travel when they can.”

Cheslin Kolbe: Warren has put together an all-round team

Whilst the upcoming British and Irish Lions tour will be an unprecedented series, Ntshona admitted the country is yearning to see South Africa back in action even if it is only on their television screens.

The Springboks have not played a single fixture since lifting the World Cup 18 months ago, but one of their heroes in Japan, Cheslin Kolbe, is excited by the prospect of representing his nation again.

The Toulouse flyer is currently preparing for this weekend’s Heineken Champions Cup final against La Rochelle but in his press conference on Wednesday, the 27-year-old was asked about the possibility of a fantastic three months which could be on the horizon for him.

“It [the tour] is definitely massive,” Kolbe said. “The group that Warren [Gatland] has put together for the British and Irish Lions is an all-round fantastic team upfront, the backline players have got big boys with an ability to carry and guys on the wing who are willing to run all over the field. It will definitely be a great opportunity whenever the Springbok group does get announced to obviously participate in that!