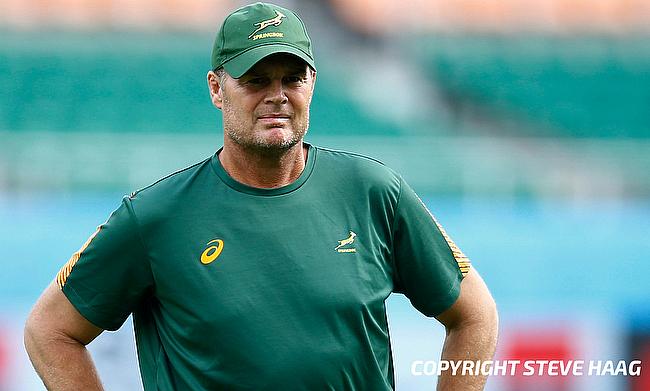 Rassie Erasmus is also suspended from all match-day activities, including coaching and media engagement until 30th September next year
©Steve Haag

South Africa director of rugby Rassie Erasmus has been banned for two months from all rugby activity after six charges of misconduct against him were upheld.

The 49-year-old, who guided South Africa to a World Cup triumph in 2019 edition in Japan is also suspended from all match-day activities, including coaching and media engagement until 30th September next year and a warning was issued to his future conduct. He was also asked to issue an apology to the relevant officials.

Erasmus was charged by World Rugby after he released a 62-minute video following South Africa's first Test against the British and Irish Lions criticising the match officials especially Australian referee Nic Berry while listing out 26 decisions that went against the Springboks as they succumbed to a 17-22 defeat.

Both South Africa Rugby and Erasmus attended a disciplinary hearing chaired by Christopher Quinlan QC, together with Nigel Hampton QC and Judge Mike Mika (both New Zealand) and were proved guilty of the charges.

The six charges upheld against Erasmus include

Meanwhile, the South African board were fined £20,000 and issued a warning over future conduct and ordered an apology be made to the relevant match officials.

The two charges upheld against South Africa Rugby include

Both Erasmus and South Africa Rugby can appeal against the decision within seven days from receipt of the full written decision.