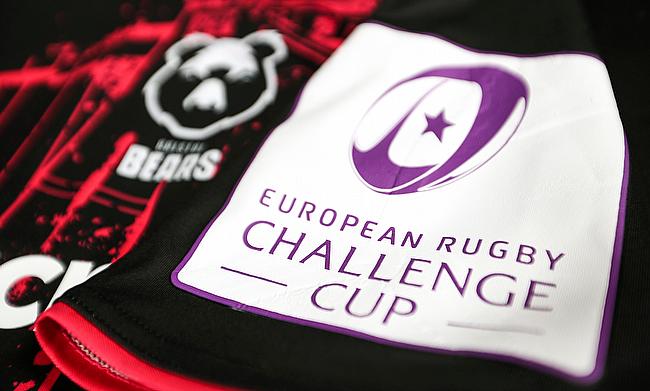 Bristol Bears are preparing for their first European final
©EPCR

'It would mean a lot for the team' - Challenge Cup Final Preview: Toulon
Bristol excited about facing Toulon in Challenge Cup final - Pat Lam
“It is no small challenge” - How the rise of Covid-19 within the student population is affecting university rugby
Highlights: Gallagher Premiership Semi-Finals

It was playing against his first professional club when Will Hurrell’s career ended 11 days shy of his 30th birthday.

Attempting to make a tackle on one of Leicester Tigers' second-rows at Welford Road, Hurrell had in fact severed the main artery to his frontal lobe at the back of his head. This, in turn, caused a stroke and he decided to call time on a career that had spanned the English league ladder.

Sleeping for up to 18 hours a day at one point for nearly two months whilst living with his parents, Hurrell couldn’t even travel in a car because of motion sickness. It has been a stark change for a man who is a self-confessed rugby fanatic.

Still living at his parents' home in Melton Mowbray, Hurrell is not leaving behind the sport that he loves entirely, having taken up an assistant coaching role at Plymouth Albion, primarily focusing on the backs.

He, of course, also keeps a close eye on the fortunes of his final professional side, Bristol Bears, as Pat Lam's men now prepare for a Challenge Cup final after reaching the Premiership play-offs.

Falling short against Wasps in the domestic semi-final last weekend, Hurrell admits he was let down by the club’s performance at the Ricoh Arena.

“I was a bit disappointed, actually, at the weekend,” Hurrell said. “Don’t get me wrong, Wasps were outstanding. That is the best I have seen them play in a while. Clearly Lee [Blackett] has done something good down there and I was really impressed by them, but I think with Bristol, they were going really well before the lockdown and they came back and had some really good wins, but then some really bad losses.

“They just didn’t seem as on it as I had thought before. The break has probably not done them good. I thought that they should have been in the final, but I think they have done amazingly well, but it is a tough ask against Toulon this weekend in the Challenge Cup. They have got a hell of a side, so they are really going to have to be on it to challenge that.”

Today is the day I announce my retirement from rugby. I suffered a stroke after a tackle in the Leicester game which has ended my career. It is much sooner than I would have liked, I felt I had much more to give. Rugby has been everything to me and I will miss playing more than I can express but new challenges await which I can’t wait to start. Every club I have been at has left something special with me and that I can never lose. Leicester, Coventry, Stourbridge, Doncaster and Bristol, I love them all. I have made friends I will never lose and that is priceless. I also want to say an enormous thank you to Matt Leek and the RPA who have been unbelievable support through this time. Also Bristol who have given me 4 immense years, all the coaching, s snd c staff and medical staff that have helped me through this journey, the fans too have been amazing. And my parents, who have helped me through everything. Again thank you to everyone who has made my journey successful and enjoyable. My new instagram and my new journey (@williamharryhurrell). Thank you everyone, see you soon ??? Hurricane x

Whilst Toulon are not the powerhouse that they once were, they still pose a threat. Without former Worcester wing Bryce Heem for the final, the French club are still capable of causing Bristol problems with Italy legend Sergio Parisse, France captain Charles Ollivon, Tonga international Sonatane Takulua and Springbok lock Eben Etzebeth all in their ranks.

The French outfit have never actually won the Challenge Cup, instead, picking up three Champions Cup titles this decade. For Hurrell, the 30-year-old believes that the best way to breakdown a side like Toulon is to apply high amounts of pressure to make them uncomfortable.

“They (Toulon) have got some unbelievable players, haven’t they?” Hurrell said. “Against any French side, what I would say is to pressure them. If you allow them to play, they are all still very joue aren’t they? The top French teams, they like to offload, and they throw big, long passes.

“What you need to do, you need to pressure them, you need to be quite niggly, get in their faces, really aggressive defence. You probably have to play quite boring for the first 20 minutes of each half, kick a lot and, like I say, put them under pressure and get stuck into them. Bristol might just have to adapt their game a little bit, but I think that is the only way I see them winning, by getting stuck into them early on.”

Winning the Challenge Cup in France on Friday night would be a first senior trophy for Bristol since the John Player Cup in 1983.

Hurrell joined Bristol after playing against them in the Championship play-offs at the conclusion of the 2015/16 season and it was the back’s first involvement with a Premiership side since his time with Leicester.

Also playing in the second division at a host of different teams, Hurrell is now stepping into National One to coach Plymouth Albion, as well as working for recruitment firm Bluepencil in the southwest, and he hopes clubs at grasroots level can navigate their way through this difficult time.

“I always remember playing against Plymouth and they were always a well established Championship side,” Hurrell said. “Our goal is to get back to that level of playing again and they have placed a lot of constraints on getting fans back into stadiums. I think for teams at this level, that is a big problem.

“I think you can kick and scream about all the stuff that has been done, but essentially they are not going to change decisions that have been made, so what you need to do is just adapt and move with it. There is ways around it, but I do think they need to be careful not to completely lose grassroots rugby.

“Coming from part-time, boys have got other jobs, but I think they (England Rugby) need to be careful that they don’t completely hamstring teams, so that everybody just starts dropping off, going into administration, not being able to pay people and all this sort of stuff.”