Who can take Exeter's place at the top? 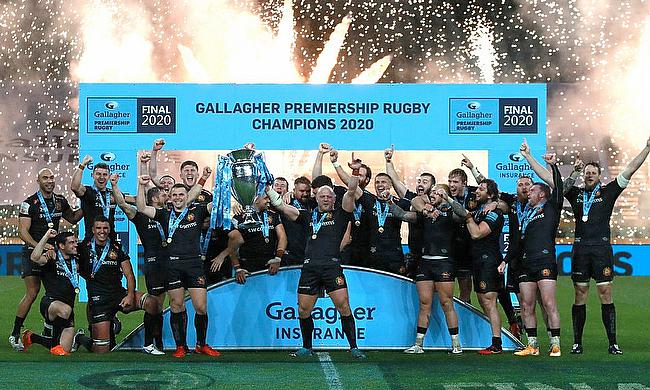 The end of November marked not only autumn settling in but also the return of the rugby Premiership in England.

The English championship is back after not even a month's absence with two matches including the entry of defending champions Exeter. The opportunity to take a look around the table to see who can succeed Rob Baxter's men. With a very important fact: the absence of the Saracens this year.

Last Friday marked the start of the 2020 - 2021 version of the Premiership with the match between the Harlequins and Exeter in the opening match. An obviously special season which starts quite late given the current health context. But this season will also be singular on a sporting level with the absence of the Saracens, who have dominated the championship for several seasons now and who have been relegated for breaking the Salary Cap. This leaves a void for the defending champion Exeter, who had a very strong 2019 - 2020 season with this historic double championship - European Cup victory. But this does not mean that the Chiefs will have no competition, on the contrary, they will be the target of all competitors. An overview of the forces present.

Every week thousands of people enjoy online betting in the United Kingdom with Betiton ™ or even Winamax or Betclic, amongst others, it has been a popular pass time for ages now. They can do so via trusted and expert websites where they can find the best odds on the market but as well precious betting tips. These are crucial to any successful bet because they have been created by calculated experts. It helps as well inexperienced and more experienced gamblers that all share the same thing: a love for sports. And these websites offer a wide selection of sports competitions to put a wager on.

Bristol and the Wasps: the threats

It seems logical to include the Bristol Bears and the Wasps in the favourites, in addition to the Chiefs of course. The first named are also European champions having won the Challenge Cup against Toulon. This season, Bristol and its manager Pat Lam do not hide his ambition to become champion. For that, the Bears are well armed with players like the Fijian star Semi Radradra, the neo-international Max Malins or the Piutau brothers. So many weapons that make the Bears a more than credible candidate for the final title.

The Wasps were the unfortunate finalists a little less than a month ago. After a two-year gap, the Coventry players are in a much better shape, but above all have made a thunderous comeback after the championship break. A course which had seen the Wasps inflict a heavy defeat on Bristol precisely in the semi-finals (47-24). The arrival of Lee Blackett as manager of this team also seems to have given a completely different face to the Ricoh Arena residents. And players like Brad Shields, Jacob Umaga and third row Jack Willis are taking this team to the top. Bristol and the Wasps seem to be the main scarecrows of this championship behind Exeter and the first day will end on Sunday at 2pm with a tempting ... Wasps - Bristol. A match that Pat Lam is looking forward to playing in order to gauge the state of his team.

Finally, the promoted Newcastle arrives in a rather special position. Indeed, the promoted player has not played in an official match since March 13th and a 41-0 victory over Bedford. Against Bath, the Falcons won't have any time to adapt. All of which will make this Premiership season exciting, there is no doubt about it.