What are the best rugby video games of all time? 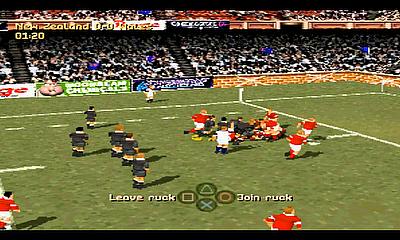 What fan can having a go at a video game interpretation of his or her favourite sport.

Having a virtual game has become as much a part of the overall experience as reading the latest team news or placing a crafty bet, and has come a long way over the past 30 years or so.

That is particularly so in this new era of eSports. Football has FIFA, American football has John Madden and basketball has NBA 2K. For the first time, virtual games are becoming as popular with spectators as they are with players. For example, this year’s inaugural eSports Premier League was broadcast on Sky. It attracted plenty of spectators, but even more notable was the amount of eSports betting that took place through online bookmakers. In the online era, it seems punters are as enthusiastic about placing a bet on eSport as they are on backing their favourite teams in the real world.

But where does rugby stand in all this? There is no FIFA or NBA2K equivalent, with fans eagerly waiting for the new release, far less any serious talk of joining the eSports phenomenon. Few would argue that right now, rugby is criminally under-represented in the video games world. Having said that, there have been some memorable games across the years. They won’t attract TV audiences, but they do serve as a great way to while away a rainy Saturday afternoon when there isn’t a game on in the real world.

Released in 1997, this was the first serious attempt to bring rugby to console gaming, and for that reason alone, many look back on it with fondness. The passing system worked brilliantly, the graphics were fine by 1997 standards and most of all, it was just so much fun. Bill Beaumont’s bizarre commentary was the icing on the cake. Of course, players soon learned that to get anywhere in the game, you had to avoid playing the All Blacks, as Jonah himself had seemingly superhuman powers. Then again, in the late 90s, that was about right.

Ah, the turn of the millennium. Jason Leonard was in his pomp, Jonny Wilkinson was the young pretender and the PlayStation 2 had brought new levels of realism to gaming. EA Sport released the imaginatively named EA Rugby alongside other great sporting titles like FIFA, Madden and Cricket, much to the delight of rugby fans the world over. Sharp graphics, smooth passing, here was a rugby game every bit as good as anything else from the EA sporting stable.

EA updated that first release in 2004, 2005 and 2006, but anyone who shelled out their hard-earned money on these felt short changed, as there were few innovations or enhancements. Taking two years to develop the next upgrade was exactly what was needed, and the 08 iteration was the best rugby game we had ever seen. The downside? Eleven years later, this is still the go-to game for many. Compare that with football - how many people out there are still playing FIFA 08?

That’s not to say there’s been a complete absence of new game releases in the past 10 years. World Cup 2011 brought the Rugby 08 into the PS3 era, and fans couldn’t wait to get their hands on a “next gen” rugby game. Ultimately, however, they were left feeling a little disappointed. Like the 05 and 06 iterations, this was more a case of rebranding, and while it remains a good game, it could have been so much better if only EA or someone else had shown a willingness to invest.