We’re going to have a crack - Cockerill 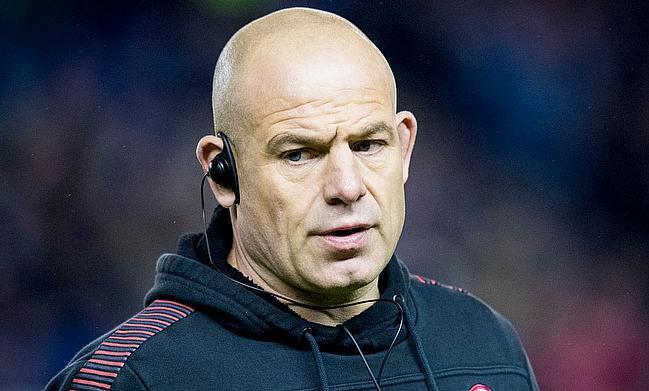 Heineken Champions Cup: Round 5 Review
Toulon wary of 'impressive' Mata
Edinburgh's Callum Atkinson is beginning to make the grade in the professional game
Edinburgh outplay Toulon as they complete 40-14 win at Murrayfield

Edinburgh Rugby head coach Richard Cockerill is not basking in the glory of Saturday’s historic win away to Toulon, but instead he is asking his players to take things up yet another notch when they take on Montpellier on Friday.

The Scottish side go into the BT Murrayfield clash top of the pool on 19 points with the French side second on 16.

A fifth victory from six, in a group which also includes Newcastle Falcons, would guarantee Edinburgh a home quarter-final.

When they went to Montpellier in round one back in mid-October, Edinburgh secured a losing bonus point from a 21-15 defeat at the GGL Stadium and it gave the players real belief that they could mix it with the big boys.

Their 28-17 triumph over Toulon in the Stade Felix-Mayol at the weekend surprised many, but perhaps not those who have watched Cockerill mould this side into his own over the last 18 months.

With a full-throttle display on the road at @RCTofficiel, @EdinburghRugby boosted their hopes of #ChampionsCup qualification and their lead at the ??@MHR_officiel also saw a dominant win over @FalconsRugby to remain in contention for qualification ?? pic.twitter.com/yW4uelYW46

Edinburgh are on the brink of only their third ever qualification for the Champions Cup last eight (following on from 2003/04 and 2011/12) and excitement in the city is building.

“Toulon is history now, it is all about the job in hand,” Cockerill, told TRU.

“We have a really good opportunity to qualify top of the group and have a home quarter-final so that’s our ambition.

“We wouldn’t have thought that at the start of the pool, but now we’ve got to this stage I don’t want us to be congratulating ourselves too much because we’ve actually achieved nothing yet.

“We can still not qualify or we could end up somewhere very, very hard in the quarter-final. Getting to the quarter finals would be a great achievement for us but we’ve given ourselves the opportunity to be at home and finish top of the group, so I want us to take that.

“Reflecting is for retirement. It was a great win and the players should take credit for that, but the next job is Friday.

“We don’t spend what Montpellier spend and if you look across their team, their individuals are exceptionally good, but across our team, we’ve got some great individuals and we’ve got a great collective and we work hard.

“Against Toulon we counter-attacked, we played very well with ball in hand and we’re finding some confidence and are developing and maturing as a team. It’s just about winning on Friday, so we’ve got to make sure that we get our systems right.

“Are we good enough? I’ve no idea. Are we going to give it a go see if we are? Bloody right we are!

“We will go out there and get our gumshields in, get our sleeves rolled up and get into the middle of it and see where we get to.”

Since Saturday, many rugby supporters have had the clip of Viliame Mata’s offload for James Johnstone’s try playing over and over again on their laptops or phones.

It was top class from the Fijian, but Cockerill believes Jamie Ritchie’s out of the back of the hand flip for Darcy Graham’s try was even better.

Big Bill Mata with one of the most ridiculous offloads you'll see all season as Edinburgh score one of the tries of the tournament so far ??

“I thought Jamie’s was even better try to be fair, maybe because he’s a little, wee Scotsman nobody says anything about it,” Cockerill joked.

“No look, Jamie’s was a great offload while Vili is a world class player, but you could have said that about a lot of our guys at the weekend.

“Vili’s was a great offload, but it was a pretty good take by Johnstone as well. If Jimmy had dropped that I’d have been banging the desk saying ‘Vili keep hold of the ball’ - you’ve got to back the guys to play what’s in front of them and I think the guys are starting to do that better.”

Meanwhile, Cockerill has confirmed that Scotland loosehead prop Allan Dell will be joining London Irish in the summer.

The 26-year-old - who ended up being called into the British & Irish Lions squad in 2017 - has been with Edinburgh since he moved over from South Africa in 2013.

“Allan won’t be with us next season, as far as I know he’s signed a contract with London Irish,” the head coach said.

What do you think of the move?#KeepItSCRUMhttps://t.co/Y3O5s26E8I

“He is a very good player and the competition here drives everyone to be a good player. I don’t think it’s anything about his playing time [Dell has been behind Pierre Schoeman for much of 2018/19], it’s about opportunity.

“London Irish are heading up and they have a good budget to recruit a squad and Allan will be part of that. We wish him well, but we have a few months of our season left yet and he’ll be an important part of that.”

On Tuesday, the Southern Kings announced that hooker Michael Willemse is at an “advanced stage” of talks with Edinburgh about signing from the summer.

Cockerill was more tight lipped on that one: “We’re talking to lots of players, he’s one of them. We live in a world of social media where rumours get spun around the whole time. I don’t have anything to tell, really.

“We’ve got a budget. It’s certainly not tiny, but it’s not big so we have to create an environment where we produce good players.

“There’s always the Scottish element which is important and we’ve got some very good young Scottish lads coming through, so it’s a jigsaw and a difficult one: part of it is positional, part of it is financial and part of it is making it work for the national cause and making this Edinburgh side better.

“It’s never a perfect picture, but we will do the best we can to get the best squad we can [in place going forward].”