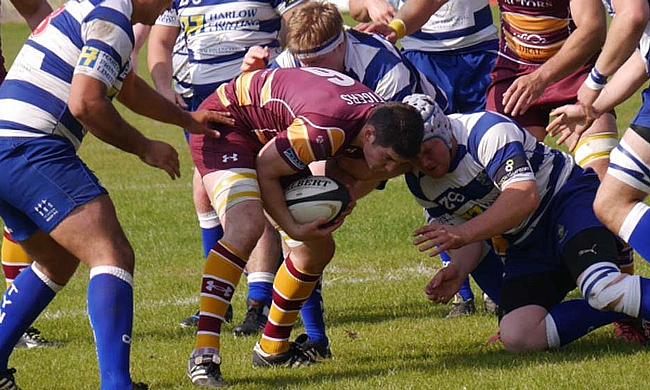 Rain has had a huge influence on rugby in the North of England over the past 5 weeks. Clubs in Cumbria, Lancashire and Yorkshire have seen their grounds flooded. One club impacted are National 2 North's, Tynedale.

Their Aviva Premiership neighbours, Newcastle Falcons, have made their 4G Kingston Park available and a 6.30pm kick off beckoned for their encounter with Sedgley Park.

The Manchester club started the season on fire with quick paced, heads up rugby and plenty of wins. As the winter rain appeared, their results seemed to deteriorate and with it their confidence.

So Tynedale came into the Saturday night fixture with two wins on the run and Sedgley Park with two losses. As the teams warmed up, it was clear that the Tynedale, the home team, were more confident and around their dugout was a fantastic team spirit. The away team looked on edge; however, they had their coach Dean Schofield in attendance.

Schofield had made several changes to his starting line up, in a move seemingly to increase his side's pace around the 4G pitch. In the forwards, he started with Crous, Ashcroft and Manley. In the backs he introduced Holloway at full back.

Any nerves with Sedge disappeared within seconds as Johnny Matthews collected the ball at pace and broke several tackles to put the visitors 15 metres from the line. This confidence created more quick ball, that Tynedale killed. The penalty kick by Steve Collins sailed between the posts. Two minutes gone and a 0-3 scoreline.

Both teams seemed to find the 4G pitch to their liking with solid scrums and good handling across the backs. The away team continuing to move the ball quickly with Andy Riley making an incisive dart back inside; again Tynedale penalised for in at the side and it was Collins slotting over the penalty. Ten minutes played and a 0-6 scoreline. However, the rain was just starting.

Tynedale were using their back row to make gains but from a turnover, the away team were able to spin the ball wide and add significant pace to the game; a try looked likely but another penalty was awarded and converted. Eighteen minutes played and 0-9 on the score board.

A well weighted re-start by Tynedale's Smith allowed them to gain pocession and move the ball forward. The defensive wall from Sedge looked to have thwarted the attack but the skilful  Tynedale winger, Dan Marshall saw Holloway out of position. With that he chipped over the flat defensive line and ran through to collect his chip and score a very well worked try. Smith stepped up and converted to make the score 7-9 on 20 minutes.

The rain was getting heavier and both teams started to use their kicking game; with this the error count increased. A penalty was awarded to Tynedale and Smith secured 3 points to take them into a 10-9 lead.

The Sedge scrum was asserting itself and providing McShane with an excellent platform to release his backs. However, it was Lamprey from the base of the Sedge scrum that was punching holes in the Tynedale defence, leading to two further penalty kicks for Collins, making a half time score of 10-15. The rain could now be classified as torrential.

At the start of the second half Sedge moved forward with two powerful forward runs in the centre of the pitch with the ball going out wide. It looked liked sevens; the reason being 16 men were in centre field pushing and shoving.

Referee Taylorson consulted with his assistant and produced two red cards, one for Tynedale's highly influential Jamie Murray and the other for Sedge Prop, Ben Black. This galvanised Tynedale and they were to be in the ascendancy for the remaining 35 minutes.

Back rowers Cairns and Bell continually carried the ball for hard yards, seemingly targeting Collins at fly half. It was Sedgley's centre, Matt Riley that was to put his body on the line time and again to foil these attacks. The rain was hammering down and Tynedale were hammering the Sedge line; but to no avail.

The Tynedale faithful were increasingly frustrated by the kicking game and were not afraid to let their team know. Despite the rain, Sedgley's Harrison, Riley and Holloway were handling the kicks well. Despite the territory the home team could not convert this into points. The Sedgley scrum remained strong, despite losing prop Black.

This was a massive defensive shift from Sedge and with 3 minutes to go they gave away a penalty that Smith kicked to take the score to 13-15. As determined as Tynedale were the Sedge players kept their defensive structure and Crous' final tackle summed up this determined Sedge D.

Collins kicked 5 out of 7 to get the Sedge points but it was the defence of Matthews, Manley and Waddy that made the difference on a wet night.