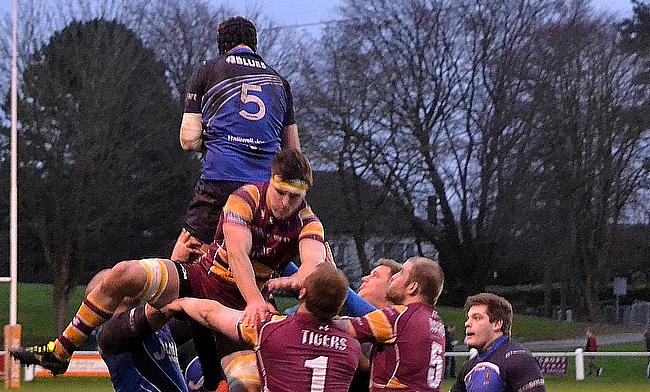 Sedgley Park closed the gap to three points at the top of National Two North as they beat leaders Macclesfield 12-27 after a superb second half display.

Macclesfield led 12-3 at the break after a try from winger Rhodri Mayor and a Penalty Try right on half-time.

Sedge hit back after the interval with their three tries and held out to inflict a second defeat of the season on Macclesfield and their first loss at Priory Park this campaign.

The difference at the start of the day was seven points at the top of National Two North as Macc went in search of their 12th straight win.

The Blues had lost just once this season and had won all six of their games on home soil while Sedgley were looking for their third win in a row and their fourth away victory of the campaign.

And it was the visitors who started brightest as they dominated possession and territory with the majority of the game being played in the Macclesfield half.

But their good early work was undone as a break from prop Elliot Millar-Mills set up the platform for Macclesfield to score the opening try.

From Millar-Mills, the ball worked its way left through the hands of Lewis Barker, Elliot Brierley and Matthew O’Regan before finding its way to Mayor who celebrated his 21st birthday by diving into the corner.

Momentum was now with Macc as they began to grow into the game, but Sedge were will proving to be a threat as they continued to pressurise the home side’s defensive line, but couldn’t put a dent in the blue wall.

They were unable to take advantage, but did slot over a penalty five minutes before half-time via Collins to get them on the scoreboard.

However, they fell further behind before the half was up as Macclesfield were awarded a Penalty Try with the final play of the first 40.

Sedgley Park just couldn’t find their clinical edge in the first period, but after the break the away side flew out of the blocks and scored two quick fire tries through Harrison.

The first came just two minutes after the restart as the influential Harrison rounded off an excellent break-away try as he ran on to a superb pass from Andrew Riley to score.

Sedgley dominated immediately from the kick-off and went over again as Matt Riley found Harrison who blasted his way past the Macclesfield defence to cross under the posts.

Macclesfield were struggling to get a foothold in the game and Sedgley stretched their lead just after the hour as a kick to corner paid off as a driving maul from the line-out saw Waddy barge his way over.

That try seemed to kick start Macc as they started to mount a series of attacks, but they just couldn’t find a way past the Sedgley defence as the away side held firm on a number of occasions.

And that was the story for the final quarter of the game as Giles Heagerty’s men were left frustrated while Sedgley Park secured the win with another Collins penalty and were left jubilant as they claimed an important to win to reignite the title race.

Elsewhere in the division, Stourbridge stay third after a 25-8 victory over Otley who are now down to 6th after that defeat.  Caldy are back into the top four as they ended a run of no win in their last five games as they triumphed 31-15 over a struggling Huddersfield side.

Sandal ran in four tries as they edged out South Leicester 20-25 away from home and Harrogate were stunned by Broadstreet as they made it back to back wins after a 23-8 victory at Ivor Preece Fields. Also, Chester ended a run of three straight defeats with a 15-21 win over Sale FC.

Old Albanian returned to the top of the table as they scored six tries on their way to a 34-5 win over Clifton while Cambridge remain level on points with OA’s after their 38-23 home victory against the Redingensians whose two game winning streak came to an end.

Taunton are now four points behind the top two as they narrowly beat Dorking 19-22 and Bishops Stortford make up the rest of the top four as they thrashed bottom side Launceston 50-7 who are still looking for their first win of the campaign.

Elsewhere, Redruth saw of the challenge of the Old Elthamians with a 37-13 win at the Recreation Ground, Southend Saxons won 16-23 away at Bury St Edmunds, Chinnor picked up their third win of the season thanks to a 35-25 victory over Barnes and Worthing Raiders secured a vital four points as they triumphed 20-27 away at an out of form Canterbury.