Wasps power on at Ricoh 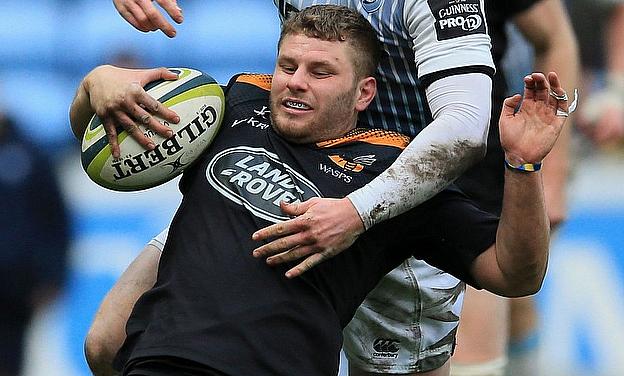 Wasps continued their impressive Premiership record at the Ricoh Arena as they downed Gloucester 32-21 to claim a fourth maximum points victory of the season.

Wasps have swept aside London Irish, Sale and Harlequins at home in the league since swapping Adams Park for Coventry and they came from behind to seal another bonus point triumph against Gloucester in an exciting encounter on Sunday.

Ross Moriarty's converted try and a penalty from James Hook had seen Gloucester leading 10-0 after 25 minutes, but Wasps roared back with tries from Thomas Young, Rob Miller and Elliot Daly to go into the break 17-13 ahead.

The hosts then added two more tries in the second half, Young again and replacement Guy Thompson going over either side of a score from Gloucester wing Henry Purdy, to seal a ninth Premiership win of the campaign.

That result looked unlikely midway through the first half, though, as it was Gloucester, who had won seven of eight matches in all competitions since going down 30-23 to Wasps at Kingsholm in December, who looked on course for the spoils.

Wasps hardly had a sniff of Gloucester territory in the opening 25 minutes and, by then, the west country outfit were 10-0 up.

Welsh international Hook missed his first penalty from 35 metres but then booted a longer kick to set Gloucester on their way after eight minutes.

The visitors then notched the first try of the match in the 18th minute when centre Mark Atkinson received the ball near the home 22 and slipped a beautiful pass to number eight Moriarty who touched down under the posts, giving Hook an easy conversion.

Wasps, though, found some attacking movement across the pitch inside the Cherry and Whites half and, when a gap appeared 25 metres out, Young grabbed the chance to reduce the deficit, dancing around full-back Charlie Sharples to go over with Andy Goode adding the extras.

What happened from there was a case of Wasps taking advantage of some dreadful Gloucester defence to score three more tries in just six minutes either side of half-time and guarantee themselves a bonus point.

Hook kicked a second penalty to make it 13-7 to the away side but when prop Jake Cooper-Woolley fielded a loose clearance from the Gloucester stand-off, it led to wing Tom Varndell setting up Miller for a corner try.

And two minutes from the break, Wasps went ahead for the first time with a piece of opportunism. A kick from halfway to the unmarked Gloucester right saw Wade field the ball and set-up Daly for a try that Goode had two attempts to convert but missed both times.

A minute after the re-start, Young grabbed his second try and the bonus point when fellow flanker Ashley Johnson stole through the lacklustre cover and put his colleague, who was on his shoulder, away.

The match kept producing more thrills as Hook, with a kick and chase, almost scored, coming within inches of the line before kicking a penalty, and home centre James Downey being sin-binned for a deliberate knock-on five metres from his line as Gloucester threatened to go over.

Atkinson was denied a try under the posts when TMO Trevor Fisher saw an infringement in the build-up to his touchdown involving flanker Matt Kvesic and scrum-half Dan Robson.

Eventually, Gloucester hit back when Purdy just sneaked in at the left corner thanks to an offload from centre Bill Meakes.

Yet it was Wasps who finished stronger with Goode stretching the lead to 27-21 with a penalty before Thompson finished off a charge on the right by replacement wing Sailosi Tagicakibau.

Gloucester, 11 points adrift, tried to get at least a losing bonus point but Wasps ground out the final minutes to keep their impressive league record at their Coventry home intact.