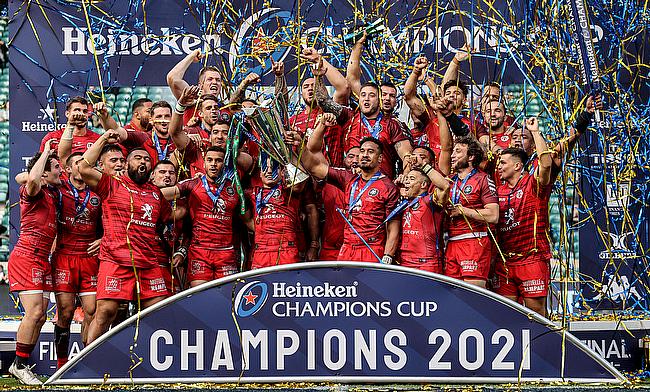 Following the Champions Cup final on Saturday at Twickenham, TRU have compiled their Team of the Tournament...

1. Cyril Baille | Toulouse - Whilst at scrum time in the final on Saturday wasn’t Baille’s best display, I find it difficult to look past the France prop. A dependable pair of hands, who is an absolute wrecking ball in the loose, the 27-year-old always gives his all for his club

2. Pierre Bourgarit | La Rochelle - A quick scan over the statistics for this Champions Cup season tells you why I have selected Bourgarit. Still only 23, the hooker won a mightily impressive five turnovers for La Rochelle and made 52 tackles for his team, as well as running one of the most effective lineouts in the competition.

3. Uini Atonio | La Rochelle - Having lived on the French west coast since the club were in ProD2, the tighthead is La Rochelle through and through. Aged 31, the prop really gave Baille, who is no mug, serious issues at the scrum and was monstrous in defence for Ronan O’Gara and Jono Gibbes in every game he played in this competition this season.

4. Rory Arnold | Toulouse - Personally, I think this man should be called Monsieur Lineout, the Australian international collecting 27 of his own balls in the air, as well as two from the opposition across the five matches he played. His consistency and ability to run that set-piece, especially with a change of hooker for the final, was a big reason he went back to the south of France with a winners medal.

5. Will Skelton | La Rochelle - In the run into the final, Skelton described how O’Gara and Gibbes utilised their power players as a major weapon. When you consider that the Wallaby made 48 carries, five offloads and 46 tackles, it is fair to say that he is one of those players and is more than warranting of a place in this team.

6. Gregory Alldritt | La Rochelle - Let’s be honest, we all love watching this man play rugby. Still just 24, France’s No.8 was the competition’s top carrier, ploughing into his opposite numbers on 76 occasions and kept his team going forward time and time again. A true joy to watch.

7. Josh van der Flier | Leinster - With all the injuries that van der Flier has had over the years, it has perhaps been fair to wonder whether or not he would be the same player. This season, the 28-year-old has picked up five turnovers and topped the tackles charts with 65 completions, highlighting his importance to Leinster and Ireland for the years to come.

8. Victor Vito | La Rochelle - A talismanic figure for his team, Vito has led by example throughout this campaign. Only missing one tackle, whilst making 47, he was consistent in getting his team the ball at the lineout and keeping the game alive by making five offloads.

9. Antoine Dupont | Toulouse - The European Player of the Year needs no introduction. Beating 24 defenders, making nine offloads and scoring four tries (along with a whole host of other outrageous stats), Dupont was always going to be in this side.

10. Matthieu Jalibert | Union Bordeaux Begles - Still only 22, Jalibert was part of Bordeaux’s first serious run to the play-offs. His influence was highlighted in the quarter-final against Racing 92 where he kicked all of their points in a 24-21 win. Falling short a round later, the fly-half still topped the points-scoring tree whilst also making 55 carries and 317 metres. Added to this, he beat 16 defenders and made a rather staggering 12 offloads.

11. Dillyn Leyds | La Rochelle - It was only as the tournament went on that I realised the importance of Leyds to La Rochelle. What you would describe as a busy wing, the South African always seemed to be in the right place at the right time, more often than not providing the pass to a teammate to score or to give it a crack himself. Making nine breaks in the process and 253 metres with ball-in-hand, he was a vital cog in his team’s machine.

12. Kurtley Beale | Racing 92 - I must confess to not having seen much of Racing 92 this season, but thanks to a trusty stat pack provided by the EPCR, Beale’s importance to the Parisians was laid bare. Carrying the ball on 46 occasions and making 309 metres, the Australian kept his team going forward, especially when you consider the 11 breaks he made and the 12 defenders he beat in the process.

13. George Moala | Clermont - One of the highlights of the early exchanges in the Champions Cup was the way Clermont played. Having watched them live in their Round of 16 game against Wasps, it was fantastic to see so many of their top-class players do their thing and Moala was quite frankly mesmeric in the midfield. Beating 20 defenders in the four games that he played in the tournament, the former All Black is unafraid to put the shoulder in and is quite clearly a leader in his team

14. Damien Penaud | Clermont - Scoring three tries in four games, Penaud was another Clermont player to seriously impress this season. Not only is he a great player, but the 24-year-old also plays with heart and you can just tell he will do anything for his team. Also making nine breaks and beating 23 defenders, it was an extremely impressive showing from another one of the men charged with taking France to the top of the world for the very first time.

15. Kotaro Matsushima | Clermont - Despite a nervous start against Bristol, Matsushima grew to be one of the Players of the Tournament. Electric with ball in hand and an ability to beat an opposite number in a phone box, the Japan international is a joy to watch and I personally cannot wait to see more and more of him. Scoring four tries, making 252 metres with ball in hand and beating 14 defenders, it was certainly a good showing for the 28-year-old.