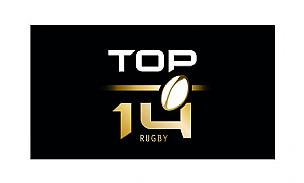 The French Top 14 returns this weekend after mixed results in European competitions for its sides. The powerhouses of Toulouse and Clermont Auvergne progressed to the knock-out stages of the Heineken Cup, whilst there will be a French side present in each of the Amlin Challenge Cup quarter finals; Brive, Stade Francais, Toulon and Biarritz are the sides to make it to the last eight. But with eleven rounds still to go in the Top 14, there is a lot to play for. Friday night sees Montpellier host Stade, whilst Toulouse pay a visit to the capital as they take on Racing Metro.

Two of the Top 14's form sides meet at the Stade Yves du Manoir on Friday night with both Montpellier and visitors Stade having won five of their last six matches.

Both sides are harbouring ambitions of securing a play-off place come the end of the season. Stade lie in 5th just a point behind the two sides above them and Montpellier, although currently in eighth, are only four points adrift of Stade and will be looking to keep up their momentum and displace the sides above them.

Another close, exciting game can be expected on Friday night “ Stade are second only to Toulouse in the try-scoring rankings, whilst conversely they have the worst defensive record, conceding 33 tries in their 15 games. Although Stade's home form has been dominant, they haven't managed to replicate that form away, and home advantage for Montpellier should give them the edge in a tight encounter. Montpellier by less than 5.

Third placed Toulon host a Bayonne side that is winless in their last five outings in what should be a one-sided encounter at the Stade Mayol.

Toulon themselves are winless in their last two games, having lost at the impenetrable fortress that is the Stade Marcel Michelin against Clermont, and in the Basque country against a resurgent Biarritz. Despite recent setbacks, the big spending Mediterranean club are still at the top of the sides fighting to qualify for the first round of end-of-season playoffs.

Bayonne have slipped into the relegation places with the resurgence of their local rivals Biarritz, and despite some impressive performances this season “ including victory last time out away to Bordeaux-Begles “ the money spent has not reflected in the results achieved.

Bayonne held Toulon to a draw earlier in the season, but the hosts have been in good nick at home and should comfortably see off Bayonne as they look to peg back the runaway leaders at the top. Toulon by more than 10.

Biarritz will travel to Castres on Saturday with a new-found confidence following the return of the talismanic scrum-half Dimitri Yachvili.

Two victories in the domestic competition, plus a hammering of Ospreys and a narrow defeat to Saracens in Europe since the French international's return has show just how much he has been missed. But with the Six Nations just over a week away, the Basque side will have to learn to do without Yachvili for another extended period, and must make the most of Saturday's game to lift them away from the relegation zone.

They will have to do without the injured Charles Gimanez, and possibly hooker Romain Terrain and centre Damian Traille, who both will undergo late fitness tests this week.

Castres have won just once in seven games in the Top 14, and although they still sit fourth in the table, eighth placed Montpellier lie five points behind Castres, and there is a long way to go yet.

The home side will be encouraged by the fact that their visitors have struggled to find the try-line this season with just 10 tries in 15 matches, whilst their defence has been ropey at best, with only Stade Francais conceding more than Biarritz.

The return of Yachvili has restored some direction and order to the Basque side, however, and while he remains around, and with the returning Imanol Harinordoquy, Biarritz pose a dangerous threat. Biarritz by 5.

Lyon slipped to the bottom of the Top 14 table before the European break following a poor run of games that has seen them win just once in their last seven games.

Agen visit looking for a win that would keep them in the hunt for the playoffs after a recent slip in form. They will face a tough challenge: Lyon may have only won three games this season, but they have one of the best defences in the league, conceding just 14 tries.

Agen have struggled in the try-scoring department with just 14 in 15 games this season, but South African fly-half Conrad Barnard has been in good form recently, and his kicking could be crucial in a low-scoring match. Agen by 3.

Perpignan haven't quite yet recovered from their dreadful run of form that saw them drop from potential title-contenders in the opening weeks, to potential relegation candidates before Christmas.

A victory over Bordeaux-Begles, arguably a side they should be comfortably beating at home anyway, is the only victory they have managed in their last ten games, but defeat to Castres, and a draw at home to Racing Metro has shown that there is still some way to go yet for Perpignan to get their season back on track.

Their hosts Brive have spent the season looking over their shoulder into the relegation abyss, despite having the best defence in the league. Incredibly, Brive have conceded just two tries in their last seven matches, and only ten overall.

Unfortunately their try scoring has been almost as low “ they have only scored 9 points in each of their last three games, and they simply do not have the ability to close off a game, or find that extra push needed to secure a victory. That is reflected in the eight losing bonus points picked up, which will be little consolation to the side that has lost more than anyone else.

With just four points covering the bottom four, Brive will be desperate to secure a victory to ease them away from the bottom. Likewise a win for Perpignan will give them ample breathing room, but a defeat for Perpignan will leave them as genuine contenders for relegation. Brive by 3.

Racing welcome the champions to the Stade de France in what they may hope will be a foreshadowing of the final in May.

The reverse fixture back in September was a thriller, with Toulouse emerging victorious by 41-36 and Racing will have to repeat a similar attacking performance to see off Toulouse on Saturday.

Both sides suffered defeat in Europe at the weekend, Racing falling short of Cardiff whilst Toulouse were rocked by an impressive Gloucester performance. Lionel Beauxis didn't have his best game, following a couple of inspiring performances in the league. It was the boot of Luke McAlister that spurred Toulouse on to victory in September, but it is likely that Beauxis will get the run out before he leaves to join the France Six Nations squad next week.

With the match being played at the Stade de France, Racing forfeit the familiarity of home. Toulouse will have been rocked by their defeat to Gloucester, and with the relief of just squeezing through to the Heineken Cup quarter-finals, they could get complacent.

A packed Stade de France is likely to be in for a showpiece game of open attacking rugby which will probably suit the visitors more. The question will be whether Racing can rise to the occasion. They have the quality, but Toulouse have the ability to trump them in every area and a fiery encounter lies in store. Toulouse by 5.

Saturday's late kick-off sees Clermont Auvergne travel to Bordeaux as they look to keep up the pressure on leaders Toulouse.

Looking at the table, the game should be Clermont's to lose, but the championship contender's form on the road has been flaky of late,       with just 18 points coming from their last two league matches on the road and no tries to their name.

Bordeaux's first season in the Top 14 has gone as well as any of their fans could have expected, and after securing consecutive victories for the first time last time out against Bayonne, the home side will believe that they can take on whatever Clermont can throw at them.

Clermont look fairly secure in second place, but a couple of poor performances could see any one of a number of teams close the gap, so they need to remain vigilant. Bordeaux have one of the poorer defensive records in the league, and despite two disappointing away performances in the league, Clermont will still have the memory of the 12 try annihilation of Aironi in Italy a couple of weeks ago. If Clermont can score early, it could be a long afternoon for the home side. Clermont by 7