Title hopes dominate Round 14’s agenda in the National Leagues 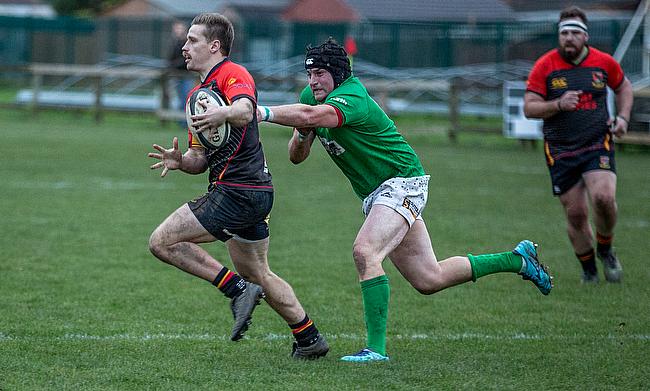 Plymouth lift themselves out of bottom three, Fylde halt Stour and Clifton fight back to beat Worthing
First weekend of December to set the tone in run up to Christmas
Promotion battles blown wide open as Storm Arwen hits the National Leagues
Another test for Cinderford and temperature dial rises in National Two South title race

The conversation surrounding the promotion races across the National Leagues is never going to go away, but the battle towards the bottom of National One is equally as gripping.

Rosslyn Park would have let out a collective sigh of relief last Saturday as they managed to edge past Chinnor in Round 13, but the 28-27 victory means they visit Cambridge this weekend with a seventh straight success in their sights.

Kieran Power’s men know they will be top at Christmas if they extend their winning run, but the hosts will undoubtedly be demanding a strong performance from themselves. The Blood and Sand are two games without a win and on both occasions, they saw healthy leads slip through their fingers. Before then, Cambridge were unbeaten in seven so Richie Williams will hope his side can recapture that form in their final home match of 2021.

Sale FC’s confidence and their ambitions for this season may well be growing at the same rate of knots. Jonathan Keep’s team have a spring in their step and five straight wins leaves them in third place and 11 points behind table-toppers Rosslyn Park.

Just one defeat since Round Three highlights why Sale are thriving at the moment, but Blackheath have the potential to make life difficult at Well Hall on Saturday. James Shanahan’s side may not want the Christmas break to come next weekend, following back-to-back victories, including an impressive recent triumph over Rams RFC (5th). ‘Club’ have also won successive home fixtures so can they halt their North West visitors?

The dogs head down into London this week to take on @Blackheath_1858
We spoke to Prop Dan Birchall to see what he had to say on this Saturdays fixture pic.twitter.com/DpPc5ieMcu

Elsewhere on the penultimate weekend before the festive break, second-placed Cinderford are back in action looking to reignite their campaign following three damaging defeats against their fellow title challengers.

They will be looking to close the gap to leaders Rosslyn Park when they travel to Darlington Mowden Park whilst Chinnor (4th) host Bishop’s Stortford, Caldy take on Rams RFC in a battle of fifth and sixth, and Taunton Titans renew acquaintances with Tonbridge Juddians for the first time since they were both promoted from National Two South. Plymouth Albion v Leeds Tykes has been postponed for Covid related reasons.

Sedgley Park have seemingly rediscovered their swagger. Eighty-three points scored in the last two games has sparked their season back into life and when you couple that with some of their rivals taking points off one another, the Tigers are now top of the pile once again.

Blistering wins over Chester and Tynedale means confidence is coursing through the Sedge veins, so a well-structured plan will be required to stop the league leaders in Round 14. Tasked with this unenviable assignment are Loughborough Students who will be eager for a victory before the festive interlude. The Midlands club were humiliated by promotion-chasing Rotherham Titans in their last home fixture so they will be hoping to avoid a repeat of that chastening afternoon against another title contender.

Speaking of Rotherham, their fortunes have not altered since the arrival of Adam Byron. The club’s new head coach has continued the Titans’ unbeaten streak, which was extended to 11 matches last weekend. The Yorkshire outfit are now only three points off Sedge, but crucially, they have two games in hand over their fellow top spot candidates so they will be keen to keep the pressure on when they face Harrogate on Saturday.

Who will shine in Round 14 on The National League Rugby Show? ??

As for David Doherty’s charges, they have made a habit of starting fast in recent weeks, but have only converted one of those positive openings into a victory. Gate may sit 15th in the table but their young side have shown a lot of promise in the face of a growing injury list so maybe that spirit could be a key attribute if they stand any chance of pulling off one of the shocks of the season.

The hosts, Hull, are only three points off the top having only tasted defeat on two occasions this term. Gary Pearce’s side probably won’t admit it, but their recent triumph over Sedgley Park has kept them firmly in the hunt for top spot whilst Fylde’s own success against the previously unbeaten Stourbridge also keeps them in the fight. The Lancashire outfit are two places and two points behind Hull so this one really is an early Christmas cracker.

After a disappointing afternoon against Worthing Raiders to conclude November, Redruth began December by staying on top of National Two South. With the title race as tight as it is, any slip up can increase pressure on the league leaders but Nigel Hambly’s side enjoyed a hard-fought victory over Rochford Hundred to get back on the horse at the first time of asking.

Their opponents in Round 14, Dings Crusaders, endured a similar feeling as they put a frustrating couple of weeks behind them to open their festive schedule with a victory over Hinckley. If they are to defeat the table-toppers on Saturday, the energy the Bristol outfit displayed for large portions of last week’s win will most definitely be needed when they make the commute to Cornwall.

The past two months have been nothing short of faultless for second-placed Esher. Six straight wins leaves them level on points with Redruth and Round 13’s triumph over Bury St Edmunds was a true test of their title credentials as they eventually saw off a roaring comeback from the Wolfpack.

Their second to last game before the Christmas break sees Peter Winterbottom’s charges welcome Canterbury to Molesey Road and for the City Men, this is just a continuation of some tough fixtures. Matt Corker’s side breezed past bottom of the table Westcliff last time out, but they have recently come up against Redruth (1st), Clifton (3rd) and Henley Hawks (4th). Despite losing all three, it doesn’t tell the full story of Canterbury’s performances so can they turn one of their bright displays into a victory against another title candidate this weekend?

Here is the National 2 South's Player of the Week from Round 13: @cantrugby's Frank Morgan #Nat2S pic.twitter.com/dXWO4rel0Z

Another week, another win for Clifton. Having experienced a dip in form following a flying start to the campaign, Matt Salter’s side will now be attempting to make it five victories in a row when they take on Rochford Hundred in Round 14.

Their 24-23 triumph over Worthing Raiders only enhanced the Lavender and Blacks own promotion bid, but even though their visitors on Saturday sit 14th in the league standings, they proved last weekend why they can mix it with the best in National Two South. The club’s website led with the headline ‘High Flying Redruth Given A Run For Their Money’ and that is precisely what Danny Cleare’s men did as they recovered from a tough first 40 minutes. Can Rochford Hundred now make it a difficult afternoon at Station Road for a Clifton side bang in form?

Speaking of teams experiencing a purple patch, Henley Hawks have won six of their last seven matches and their brilliant run of results means they are now only four points off the top.

To see all the highlights from Round 14, subscribe to The National League Rugby Review Show for just £6!