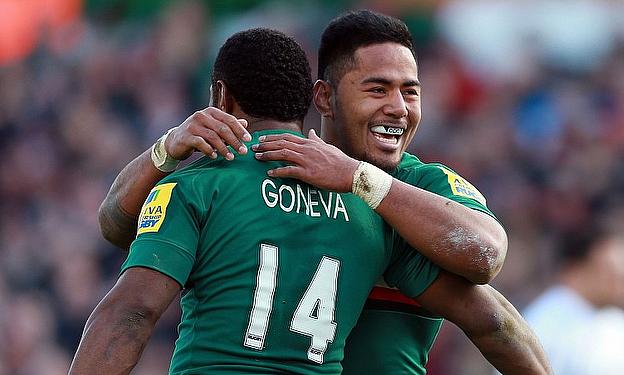 Leicester consolidated fourth place in the Aviva Premiership with a six-try thumping of Exeter at Welford Road on Sunday.

The champions produced one of their best performances for some time to demolish the newly crowned LV=Cup winners 45-15 with three tries in each half.

Exeter, who had captain Dean Mumm sin-binned in the first half, replied with tries from Jack Yeandle and Ian Whitten, with Henry Slade kicking five points.

Scrum-half Ben Youngs made his 100th start for the Tigers and, in the process, he and his dad Nick became only the second father and son to achieve the feat, after Ian and Matt Smith.

Exeter weathered an early storm from Leicester and took the lead in the seventh minute with a penalty from fly-half Slade.

But then Tuilagi showed just how much Leicester had missed him by scoring his side's first try and causing huge problems for the Chiefs' defence.

The try, in the ninth minute, came after Tuilagi evaded a tackle and burst down the left and, from a ruck, Anthony Allen put his fellow centre over.

Williams' conversion was adjudged by the touch judges to have missed but TV replays showed they had got it wrong.

Leicester stretched their lead to 12-3 in the 13th minute when huge prop Mulipola ran straight over Nowell to score after a break by winger Goneva. Williams added the conversion.

Williams then booted a penalty but Exeter hit back with a try by Yeandle form a lineout and drive, which Slade converted from the left touchline.

Leicester restored their 12-point advantage two minutes later when Goneva split the Exeter defence before dummying three defenders to score near the posts with Williams adding the extras.

Mumm was sin-binned in the 33rd minute for a high tackle on Williams after the referee had viewed the new TV screen at the clubhouse end and minutes later Williams slotted an easy penalty to make it 25-10.

Exeter just managed to clear after making a mess of a lineout on their own line at the start of the second half but, after conceding a penalty when their scrum was marched backwards, Williams made it 28-10.

Thompstone earned Leicester a bonus point with their fourth try after a flowing move through the backs but Williams missed the touchline conversion.

Leicester brought on former England fly-half Toby Flood, who is joining Toulouse next season, on the hour and his missed tackle allowed centre Whitten to turn defence into attack with a scything 40 metre run to the Leicester 22.

The Chiefs failed to take advantage of a period of pressure and Leicester charged up the other end and, from a scrum on the Exeter line, replacement scrum-half Mele scored with virtually his first touch. Flood converted from the left touchline to make it 40-10.

The Tigers nearly scored a sixth with four minutes left after great work by replacement Graham Kitchener and Goneva but it was Mele who got his second with less than two minutes left.