The Tigers have threatened this performance all season, most notably away to Harrogate and away to Ionians. The game of the season for many Tigers supporters saw their team take on league leaders Hull Ionians and produce a performance worthy of a higher league.

This was a fixture that the Tigers were using to support the local community with Bury Hospice being the centre of attention. We at TalkingRugbyUnion supporting the event with shirt sponsorship. As ever we had @sedgetiger on hand to give us insight and commentary via a live feed on the club's website.

So what did he have to say?

"This was predicted as a simple away victory for a team on an upward curve and destined for top slot, against a team full of potential on paper but in the results game, short on performance.

"Hull Ionians came to Park Lane battered and bruised from the leagues big encounter of the season, the match of the day against Ampthill and District last week, they came on a high note of victory but could they pull another victory off at Park Lane? 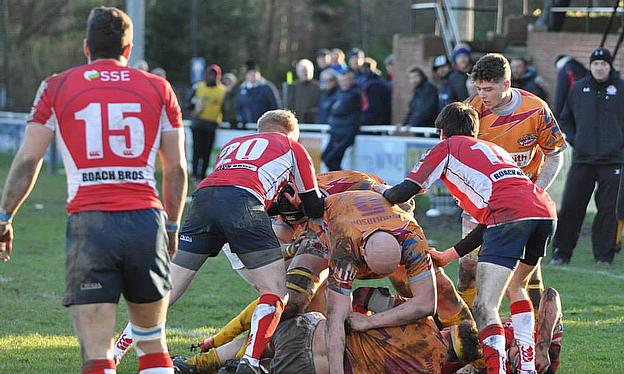 "With both sides stripped of the strongest squads and Sedge on a poor run of form, the game plan for the visitors was all about containment, patience and picking off, in time the home side. Composure the watch word."

Ionians had also the news that their tight head prop, Steve Johnson was selected for England Counties. A significant achievement. There was also the news that coach, Alex Crockett would be on the replacements bench. For the Tigers, it was the Riley brothers starting in the centres.

Going down the hill and with wind, "Sedge gave up the predictable tactical ball into the corner, for a running option, and this was reciprocated by the visitors with rush back into traffic with an end result of a midfield arm wrestle with no one coming out on top. 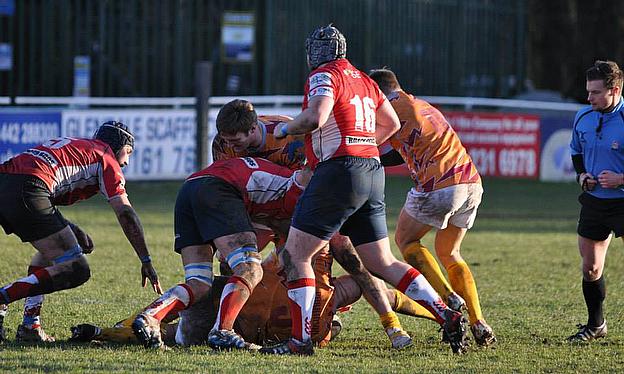 "Mistake after mistake blotted the opening period in a round of predictable attack lines, and woeful tactical kicking, but there came one momentous brilliance in the Mancunian sunshine when up stepped a man of a imagination, as acting inside centre, Tigers Andy Riley played the space with head held up high, and attacked the wide left channel.

"The run was supported by winger Jamie Harrison who took on his outside man but with no space left kicked forward towards the post.

"This option created complete havoc for the visitors who failed to clean the ball up then coughed the ball up after some great surge pressure chasing. 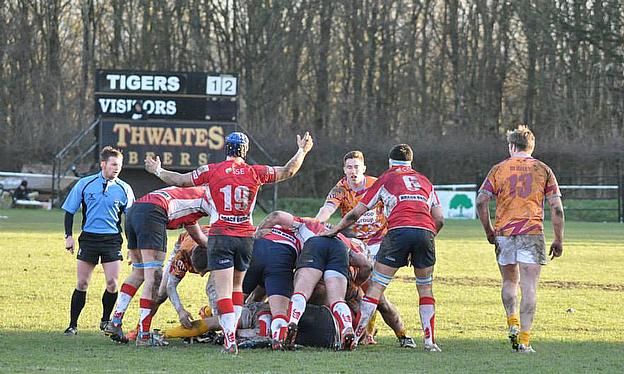 "With the ball back with Tigers pack first back row Rhys Davies went for the line as Tigers went on a series of pick and go attacks, then second row forward Ollie Parkinson went and was repelled back. Finally up stepped Tigers captain and second row forward, Juan Crous to lead by example as he smashed over for the first try of the game on 16 minutes," was how @sedgetiger described the action.

There was a sense amongst the crowd that Sedge needed more points from the first half and vocal demands for the ball to be kicked to the corners. As play went back to the predictable stalemate, as both sides huffed and puffed 10 metres from either side of the halfway line as 'nowt' was going to happen. 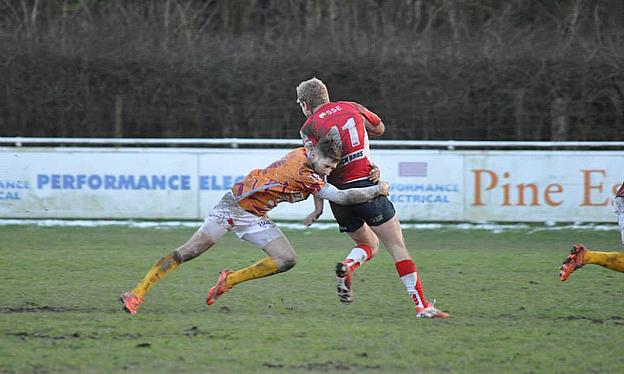 Then Ionians broke out and a series of good phase up play got them within the Tigers 22, desperate defending was the order of the day for Sedge, but the first up defence had been and would continue to be the difference all game.

Sadly on a team warning, which no one knew at the time, Juan Crous was yellowed carded leaving the I's right in front of Tigers try line with a scrum, and Sedge down to 14. The strong Ionian's contingent urging their hero, Steve Johnson to walk them over the line. The Tigers crowd loudly urging their pack to "grind them into the dirt". Good natured yes but everyone knew how important this scrum would be.

"Turning points come to mind and this was one of them. Outside centre Matt Riley went into the back row and what looked an unpowered pack became a statement of intent as the makeshift pack took the hit, turned it and drove back Ionians major offensive option," was how @sedgetiger saw it.

To take this heavyweight pack on and drive them off the ball was immense; Ashcroft, Blackwell and Black superb. This was the best performance in a Tigers shirt by Blackwell thus far. This one scrum did turn the game and reputations were gained and lost. 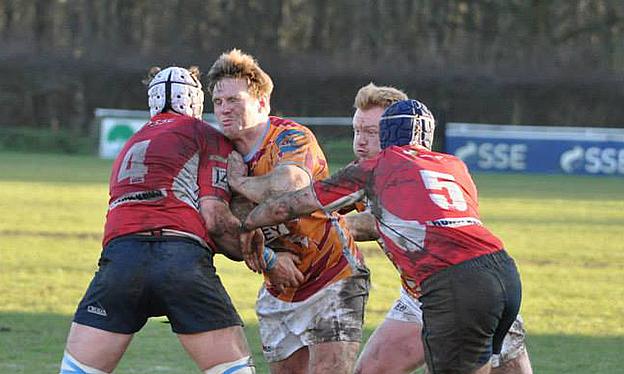 With Ionians playing down hill, the home faithful were expecting Ionians fly half to kick into the deep corners and work the line outs where their talented pack could rebuild their reputation.

Playing with fourteen, Tigers came to life taking the game to Hull and opening them up deep into their own 22. Under pressure Ionians coughed up the ball when it was loosely hoofed up field, as the ball was collected within the Tigers 22, but with no pressure on from the Ionian chase Sedge opted to counter attack. 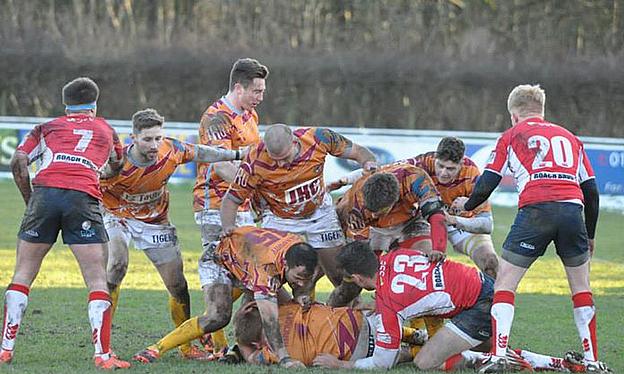 A series of good quick hands found winger Jamie Harrison deep in his own half who then took on the Ionian back three on his own and won, as he sneaked in at the corner for try number two on 47 minutes.

The Tigers pack were confident and totally dominant. This was infectious and the Tigers backs showed precision and belief, to cut the top team apart.

Let's allow @sedgetiger to finish the story, "The third try came after a withering forward attack on the visitors line with Matt Lamprey heading for glory only to be stopped at the last point. Good quick ball from Tigers scrum half Callum McShane, sees the ball spun out as a very clever decoy from the Riley brothers, opens up a huge hole for fullback Rob Holloway to cut back inside for try number three on 52 minutes. 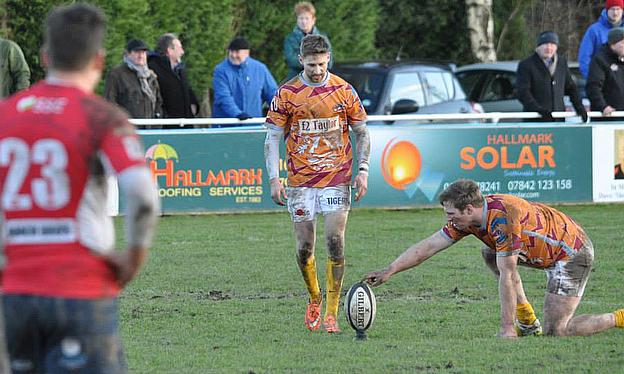 "Straight from the off Hull go deep into Sedges 22 but with the poor ball badly supported, Sedges winger Curtis Strong comes inside to clear it up. Head up he decides to take on the space in front of him and he steps the first two tacklers to break free heading towards the line. A fantastic tackle from Hulls back three sees Curtis Strong in touch.

"A quick throw by the visitors to set up a counter attack results in the the receiving player being caught isolated and from a quick first up defence by Sedge who turn defence into big a attack as number 8 Matt Lamprey breaks two tackles and stretches for Tigers bonus point try on 62 minutes, which was converted by Matt Riley.

"Tigers dominance was complete with Ionians down to 14 after a series of warnings of slowing the ball down, sees them very much on the back foot with Sedge very much in a mood to kill off the visitors.

"Another poorly executed kick from Ionians saw the ball fielded and ran back down the Tigers right wing. Hull win the ball but lose it under pressure. Tigers pack in a reverse of normal roles stuck the ball 'up the jumper' and march the Ionians defence a full thirty metres over the try line for tight-head prop forward, Ben Black to dot down for try number five on 69 minutes. 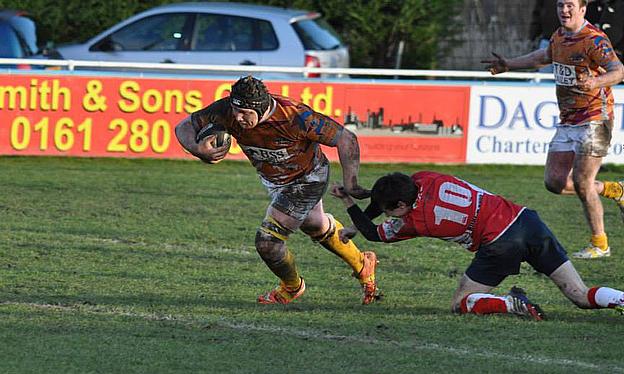 "Seventh heaven not quite yet!

"Back to 15 Ionians attempt to get points at any cost to stave off the potential 'nilling' but it only leads to the best try of the day as the ball was fielded once again and a brilliant series of interplay by six pairs of hands puts in hooker Liam West on the hoof heading to the line only to be stopped by a good last ditch tackle.

"From the recycled ball, the Tigers attack played a huge dummy option which was bought by the a Ionians defence for centre Matt Riley to run unopposed between the posts on 72 minutes. Game over

"Ionians did get their points on the board on the last play of the game with game opening up good broken play saw winger Stephen Slingsby in for a consolation try on 78 minutes."

"This was Tigers day, which on reflection will leave the home side more questions than answers.
Today was all about a complete effort from all the team and though hard to call a man if the match the award did go for top effort from number 8 Matt Lamprey. It would also be amiss not to acknowledge the work of DoR Steve Hazzelby and the rest of the coaching team in getting lads prepared mentally and tactically after the disappointment of last weekend. 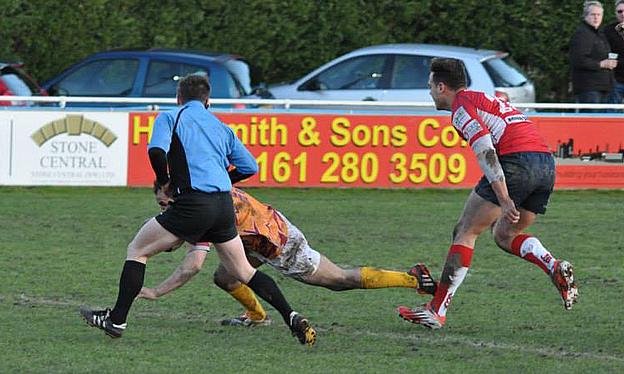 "Hull Ionians are a good outfit, and will, more or likely win the league. We wish them well in this regards. Good luck.

"Sedge should take this result and use it to set things up for the rest of this and a basis of a competitive effort for next season.

"The final word must go to all for the brilliant support for Bury Hospice today and a big thank you to the very large Hull contingent who came over to the game at Park Lane and were very gracious in defeat. A credit to the their club and this game."

A dazzling advertisement for the 4th tier of English rugby and with Mr.Lancaster's injury woes, there is no doubt that there is strength in depth within the English game. A most unexpected result but when the Tigers pack took the scrum to Ionians at the end of the first half, a whole new mindset was created and all 15 men played to their own and collective potential.