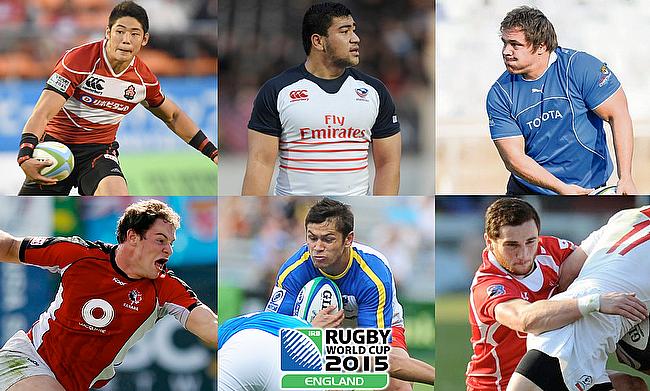 There will be no shortage of expectations hoisted upon the likes of Julian Savea, Duane Vermeulen and George North when the Rugby World Cup begins later this month.

These three, along with many others, are the current superstars of the game and will undoubtedly be the focus of much attention over the next two months, but who are the players you should be looking out for amongst the less established rugby nations?

We have put together a number of players who, on a weekday afternoon, when you’re watching Canada vs Romania or Namibia vs Georgia, you’ll need to keep an eye on.

The 21-year-old winger has already accrued an impressive 26 appearances for the Cherry Blossoms and even more impressively, has run in 25 tries for his country during that time. Admittedly, 19 of those tries have come against the likes of UAE, Hong Kong and Sri Lanka, but he has also pierced the defences of Wales, Samoa, Canada and the USA over the last few years.

Fujita should be an integral member of an underrated Japanese back line, which also includes Fumiaki Tanaka, Male Sa’u and Ayumu Goromaru, and he should relish going up against the likes of Bryan Habana, Alesana Tuilagi and Tommy Seymour in the group stage. With Eddie Jones as Japan’s coach, expect them to be more competitive than you perhaps give them credit for right now, and look for Fujita to be their main try-scoring threat.

Since emerging as the USA’s starting tighthead earlier this year, the Eagles have won three of their last four games, seeing off Japan and Canada (twice), as well as putting up a solid showing against Australia. At just 20 years of age, Lamositele is still incredibly young to be anchoring an international pack, but the youngster has spent the last two years with Saracens and has been learning from some of the best in the business.

Perhaps even more remarkable is that Lamositele actually made his international debut at the tender age of 18 and now, after two years of gathering experience on the bench, is ready to pack down against some of the most physical scrummagers in world rugby. The looseheads of South Africa, Samoa and Scotland would be well-advised to pay Lamositele the respect he is due, lest they be left with egg on their faces at scrum time.

A Super Rugby hooker, van Jaarsveld was one of the few shining lights in a poor Cheetahs side last season. His accuracy and impact at the set-piece was one of the highlights of the Cheetahs’ season and the biggest compliment you can pay the man is that he almost completely made up for the departure of the franchise’s former heartbeat, Adriaan Strauss.

The Namibian will have to do a similar job on the international stage over the next two months, where many of his teammates will be a class or two below their vaunted opponents. Along with Jacques Burger and Chrysander Botha, van Jaarsveld will need give everything he has to help keep Namibia competitive.

Back-to-back losses to the USA have tainted Canada’s build-up to the RWC but it will be the responsibility of Ardron, the Canucks’ captain, to lead them to better things when their group stage campaign kicks off against Ireland at the Millennium Stadium. Along with London Irish’s Jebb Sinclair, Ardron will need to be a source of go forward ball for Canada, otherwise the proficiency of Ireland at the breakdown could turn the game into a very long 80 minutes for the Maple Leafs.

Canada have the firepower outside in the form of Pro 12 wingers Jeff Hassler and D. T. H. van der Merwe, so the emphasis on Ardron to lead his pack to somewhere near parity with the likes of Ireland, France and Italy will be immense.

Romania are never short of quality in the tight five, but Fercu, a winger, may be the Oaks’ most dangerous player. His nimble footwork and deceptive strength earned him a shot with Saracens last season and he made the most of any opportunities that came his way, including their midseason matches with the Bulls and Western Cape.

In addition to honing his game in North London last season, Fercu also has 78 caps and 28 tries to his name and should Romania decide to play a more expansive game, they will certainly try to get the ball into his hands. The winger dealt well with the step up in quality he encountered at Saracens and now he gets to try his hand against the likes of Simon Zebo and Yoann Huget.

You could take your pick of Top 14-based tight five behemoths in the Georgian squad, with the two Davits, Kubriashvili and Zirakashvili, particularly noteworthy, but Lobzhanidze, an 18-year-old scrum-half, looks a real talent. Unlike fellow teens Otor Giorgadze and Beka Gorgadze in the Georgian squad, Lobzhanidze has yet to make the move to a French academy (don’t rule it out post-RWC…) and instead still plays his club rugby in Georgia.

The young scrum-half has emerged as a starter over the course of 2015 and leads a very raw, but very promising back line, as the Lelos look to try and balance what has always been a very forward-dominated team. There’s every chance that this inexperienced back line will look out of their depth at this level, but don’t expect the already refined Lobzhanidze to be one of the weaker links.