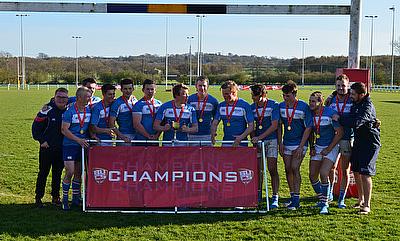 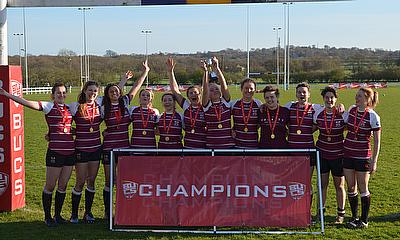 Newcastle beat Manchester Metropolitan 33-17 to secure gold in Yorkshire with Bristol defeating Brunel University 33-14 to clinch the trophy on their first appearence in this competiton.

It was a fitting end to a sensational day of rugby sevens, which saw both the men’s and the women’s tournaments run simultaneously and also  a 150 per cent increase from 2015 in the number of participating female teams in this year’s competition.

With Newcastle being crowned National Champions, it is another positive to add to their very encouraging season in the BUCS leagues with their 1st XV side team reaching the play-offs of the BUCS Championship earlier this year. As for Bristol, they finished top of Western 1A this season and already have the upper hand in the play-offs. They beat Sussex 96-0 last week, with the next fixture coming on Wednesday. With this BUCS 7s title and the league championship already in the bag, promotion now also seems on the cards for Bristol.

The Men’s competition was spilt into four pools which contained four teams and from this stage of the competition, Essex, Loughborough 2s, Newcastle 2s and Durham 2s all advanced to the quarter-finals as group winners with 100 per cent records to their names. Joining them in the last eight were Man Met, Sheffield, Leeds Beckett and Bath 2s.

As for the Women’s tournament, there were two pools of five teams. Bristol topped their group while Brunel had to settle for a runners-up spot in Pool B as they finished behind Durham following an early defeat to Newcastle 2s.  Making their way into the last eight with those three teams were Oxford Brooks, Nottingham and Edinburgh 2s as well as Northumbria 2s and Bath.

After a thrilling pool stage, came an enthralling set of quarter-finals. On the Men’s side of the competition, top seeds Newcastle beat Leeds Beckett 2s 15-5 to reach the last four while Group B winners Loughborough eased past Bath 2s with a 33-12 victory as they went in search of silverware following their heart breaking defeat in the XV a-side BUCS Championship final just over a month ago.

Elsewhere, there was a shock in the third quarter-final as Group C winners Durham were beaten by Manchester Met 31-10 after the north-west side had won just one of their three pool matches while Group A runners-up Sheffield beat Essex 34-19 to make it through to the semi-finals.

In terms of the women’s tournament, Bristol and Brunel glided into the last four with 36-0 and 32-5 wins over Oxford Brooks and Edinburgh 2s respectively. The other sides to join them were Nottingham who finished third in Group A as they beat Northumbria 20-15 while table toppers of Group B Durham edged past Bath 20-12.

So, into the last four where Newcastle put in a very professional display to beat Sheffield 21-12 to advance to the final whereas the second semi-final was more dramatic and arguably the game of the day. Neither side was willing to give up the fight despite the hot conditions in Leeds, but eventually Manchester Met prevailed beating a strong Loughborough side 25-21.

In the Women’s semi-final, the pattern continued as Bristol and Brunel coolly negotiated their last four ties with Bristol easing past Durham with a 31-0 win while Brunel came away from their semi-final with a convincing 34-5 victory over Nottingham.

After 56 matches in both the Men’s and the Women’s trophy, it came down to the final two games as Newcastle and Manchester Met as well as Bristol and Brunel went head to head to be crowned national champions.

On the Men’s side of the draw, both of these sides had met in in Pool B earlier on in the day with Newcastle triumphing 31-7 so Man Met knew this would be a tough battle against a side that had blown everybody away who they had come up against. Met did fair slightly better, but it was Newcastle that took the glory as they won 33-17.

Newcastle’s Max Kelly: “We arrived in Leeds not knowing what to expect because we have trained as a squad due to the Easter break. I think we had played just once before this tournament so to have gone on to win it was amazing.

“At first, we were focused on taking one game at a time but to beat Durham and Loughborough made us realise we had a chance of going all the way and we did not let up in the final. It is great credit to the strength in depth that Newcastle has and now we are heading into the Championship Trophy next week looking to go all the way in that too!”

The women’s final was a much closer affair between two sides that had caught the eye all day.  Bristol Captain Tilly Vaughan-Flower said in the week that her side had had an amazing year and it was rounded off with a 33-14 win in this tightly contest final.

So with the Trophy now all done and dusted, attention turns to the BUCS Championship Sevens which takes place next week in Leeds as universities battle it for the biggest prize in University Rugby Sevens.

Click on the link to see our pictures from the BUCS Rugby Sevens Trophy!