Survival once again on the agenda in National Two South 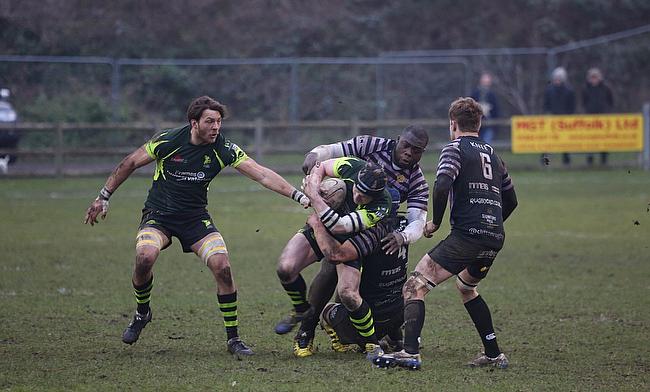 Like in National Two North, National Two South focuses on the fight for survival this week and in a way, it is even more relevant in this division.

Just six points separate ninth place and 14th place in this league showing that nearly all the teams in the bottom half of the table are not safe from the drop just yet.

Last week, Chinnor, Dorking, Bury St Edmunds and the Redingensians all picked up crucial wins in their quest for safety, but they all know it’s just the beginning to a long road  to survival.

At the top, Cambridge will be looking to maintain their seven point gap ahead of the Old Albanian while Bishops Stortford and Taunton will fancy their chances of raiding the top two places in the final stretch of this enthralling promotion race.

Clifton are enjoying a much more comfortable season than last term. Although they have not set the league alight on too many occasions, the South Gloucestershire side sit in a respectable eighth place having picked up nine wins this campaign.

But those victories have dried up dramatically over the last couple of months. Since beating Bishops Stortford in the middle of November, Clifton have won just two of their last 11 games which has seen them drop towards the bottom half of the table. They are only nine points clear of the relegation zone so that comfortable season could be disturbed if they fail to find another win soon.

Cambridge sit top of National Two South and are now seven points clear for the first time this season after a home victory over Worthing Raiders last weekend. Four tries in 13 minutes at Volac Park was enough to earn them an 18th win of the season to put them in the box seat for promotion and potentially the league title.

After finishing seventh last season, the Blood and Sand have gone from strength to strength this term and have been unstoppable since their win over the Old Albanian a few weeks ago. They head to Gloucester on the back of three straight wins and are favourites to continue their run this weekend.

The Old Albanian are enjoying a strong season in National Two South after relegation from National One. As things stand, the OA’s sit seven points behind leaders Cambridge after their match against Redruth was postponed last week. Both Cambridge and the OA’s have played 21 games this term.

After being out of action for a week, the OA’s can turn their sights back on the title race as they look to end a surprising run of three straight defeats. Those damaging losses against Cambridge, Bishop Stortford and Chinnor meant the OA’s were knocked off top spot and with four points now the keeping them in a promotion place, they will be desperate to return to winning ways.

Dorking’s season has been in a lull for most of the campaign. From promotion candidates last season, they have been stranded in the bottom half for the majority of this term and are currently only a point clear of the relegation zone.

They occupy 12th in the division having won just one of their last five matches; that coming last weekend against bottom club Launceston. That was crucial for them as teams fighting around them for survival also picked up points and if they were to get anything from the Old Albanian on the weekend, that could prove vital come the end of the season.

Worthing Raiders are still in a relegation battle this season. The Raiders currently sit six points away from the bottom three but they will be hoping that three wins in their last five matches is the sort of form that can carry them away from the relegation zone.

Worthing sit ninth,(which highlights how tight it is towards the bottom of this this league) after recent home wins over relegation rivals Bury St Edmunds and the Redingensians. Worthing finished just three places behind Bishops Stortford last season so they are capable of getting a result against one of the top teams in the division.

It’s been as we expected for Bishops Stortford this season. The men from Silver Leys finished in the play-off place last term and were defeated by Ampthill and District, but they haven’t let that affect them as they are very much in the hunt for second spot once again this campaign.

Stortford currently sit third in the table and four points behind the Old Albanian, but they failed to crank the pressure up on the second placed side after suffering a home defeat against Taunton last weekend. They make the trip to Worthing having won eight of their last 10 games so they will be confident of a victory this Saturday.

Taunton Titans are fighting for the play-off spot in National Two South this season. They finished third last season and are once again in the hunt for promotion after a strong campaign thus far. Currently, they are fourth in the table, just six points behind second-placed Old Albanian.

Form has been good recently too. Four wins in their last five game, including that win away at Bishops Stortford last weekend has put them in a great position for that play-off spot and key to their impressive season, has been the fact they have won all nine of their home matches – the only side with a 100 percent record at home in the division.

Chinnor are doing certainly on course to move out of the bottom three after a mini revival over the last four weeks. After finishing sixth last season, I don’t think anyone thought they would be in a relegation scrap but they have been towards the bottom of the division for the majority of the campaign.

As things stand, Chinnor do occupy a spot in the relegation zone, but wins against Canterbury, the Old Albanian and Dorking leaves them level on points with Canterbury who are in the final spot above the drop zone. The away side will have a tough job on their hands this weekend, but if they are to get a result, it will further boost their confidence.

Redruth are sitting in a comfortable fifth place and look good for a top half finish. Their weekend game against the Old Albanian was postponed meaning they have not played for the last two weeks but they have no fears about falling down the table, despite not been in action.

Redruth will be itching to get back playing though as they have won five of their last six league games. They are 16 points off a play-off place with a game in hand, so it looks likely they will finish outside the top four, but all they care about is keeping this positive season going.

Canterbury are struggling once again this season. The City Men had begun the New Year with four straight wins, but have fallen to three straight defeats which has dragged them to the cusp of the relegation zone and momentum once again has been lost.

As things stand, Canterbury are level on points with Chinnor who sit in the first relegation spot and they will no doubt be hoping that they can pick up a welcome victory at home this weekend as they go in search of their eighth win of the season.

The Old Elthamians are enjoying another sold season in National Two South. After finishing eighth  last season, the OE’s have pushed on from then and look set for a comfortable finish in top half, if not the top six this term.

Saturday’s unglamorous win at Southend leaves the OE’s sixth in the table and they can afford to feel comfortable as they are 11 points inside the top half. They have looked strong at home this season too, but their only blip came two weeks ago as they suffered their heaviest home defeat in their history against the Redingensians so they will be looking for a response at Queen Mary’s on Saturday.

Bury St Edmunds’ relegation nerves were slightly eased last weekend. Their victory over Clifton arrested a run of five games without a win and leaves them two points clear of the drop. The newly promoted side are going through their worst patch of form this season, but that win last weekend is exactly what the doctor ordered.

Bury head into this clash with the Old Elthamians having won eight games this term, but only two of these victories have come on the road. They’ll be desperate to improve on that record and show that they can survive in National Two South.

Everyone associated with Barnes Rugby Club will be fairly confident their side will be in National Two South next season. After promotion via the National Three South play-off, Barnes have adapted to life in the fourth tier of English rugby extremely well as they sit 14 points clear of the bottom three and seventh in the table.

After a six game unbeaten run, Barnes lost their first game of 2016 last week against the Redingensians so they will want to react with an eighth home victory over the season this weekend against relegation threatened Southend Saxons.

Southend are well and truly battling for their National Two status once again this season. Last year they stayed up on ‘Games Won’ and after a reasonably good start to the campaign, looked as though they would not be in the same predicament as last year.

However, just two wins in their last 12 matches has seen them fall from eighth to 15th in the table and the Saxons are now five points from safety. They are far from dead and buried just yet, but they need to take a leaf out of Barnes’ book and string an unbeaten run together quickly if they are to dig themselves out of trouble.

Heartbreak against Dorking was the last thing Launceston needed last Saturday. They were minutes away from their second draw of the season, but fell to a 19th loss of the campaign which was another nail in their National Two South coffin.

They sit bottom of the table and without a win this season. They are 33 points from safety with 10 games remaining and it would take the greatest of escapes if they were to pull of the most unlikely fightback. It’s nearly all over for Launceston in the fourth tier of English rugby.

Things are looking brighter though for the Redingensians. Three wins in a row as lifted them out of the bottom three and the promoted side are two points clear of the drop in a very tight and tense relegation battle.

Their victories have come against sides in the top half which is another feather in their cap. They will fancy their chances against the leagues bottom club of making it four wins in a row, something they haven’t done since their title winning season last term.