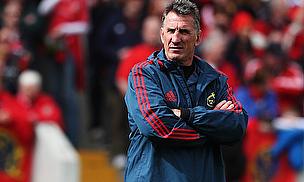 Munster head coach Rob Penney has lauded his team's performance in their Heineken Cup quarter-final against Toulouse as 'outstanding' and 'terrific'.

At Thomond Park, the home side produced a powerful performance, romping to a six-try win by 47 points to 23.

They started strongly with a Keith Earls try in the opening minutes and although Toulouse closed to 13-9 at the break, Munster stormed clear in the second half with Dave Kilcoyne, CJ Stander, Casey Laulala, Simon Zebo and Paul O'Connell all crossing.

"It was great to get the win but the performance was outstanding. It's not a secret how dangerous Toulouse are and great credit to the lads both sides of the ball. They were terrific and you need to be against a side like that," Penney said.

"They all had to play big today. If we had any weaknesses they would be exposed and we talked all week about everyone having the best game they could have in the Munster jersey.

"You could look along 1 to 15 and the guys who came on...they were so determined to do well for each other and the spirit is there and is going to see this organisation well for a period of time."

And he revealed he was not concerned that the lion's share of possession in the first half only resulted in a four-point lead at the break.

"I thought there were opportunities to get another couple of scores. They probably had a couple as well but to be up into the wind and playing the way we were was a great joy when we came in at half-time.

"We just encouraged them to keep going, do what they were doing. There wasn't a lot of need to change anything. It was about bringing the same excitement we had in the first half into the second half and they did that certainly with a couple of nice tries."

"Munster taught us a lesson. They were outstanding. We tried to play all the ball but we exposed ourselves," he said.

"We gave it our all, we put everything into the game. They deserved the score, but my job is about helping the team to learn the lessons and bounce back for the Top 14.

"I hope we will be able to react as a squad who are proud of their jersey, who have won five (pool) games out of six and have been defeated by a great Munster team."

Penney said that Munster's win was one of the more complete performances in his time as coach, with the only negative an arm injury suffered by captain Peter O'Mahony.

"The manner in which the boys went about their work and not once did they go into their shells or get nervous even when a little bit of pressure came on them in the second half.