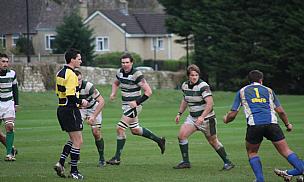 Super Rugby referees will - literally - have an extra card up their sleeves in this year's tournament with the addition of the white card.

As part of SANZAR's new experimental "on-report" system aimed at removing foul play from the game, referees in Super Rugby will have the option of using the white card to refer incidents of suspected foul play to the citing commissioner when the identity of the perpetrator is unclear.

The game will continue as the suspected player or players are put 'on report'. Referees will continue to carry yellow and red cards.

"The white card will be helpful in instances where a referee thinks an act of foul play has occurred but is not sure if a red card is warranted, or is unsure of the identity of a player," explained SANZAR game manager Lyndon Bray.

"It will also help get to the bottom of instances where a player makes a complaint to a referee who did not see an incident."

Many referees believe the introduction of a white card this season will take pressure off them.

"I think it will assist us in removing incidents from the game that the IRB and SANZAR are trying to remove and clean up the game in terms of foul play," referee Andrew Lees told AAP

"That (new system) makes it a bit clearer for the public, who in the past may not have known things are going to the citing commissioner. We're just making the process a bit more transparent to the public eye."

"I am not concerned that the referees could adopt the view that they would rather pass on the difficult calls to the citing commissioner," he told the Business Day

"The white card would be used mainly to ensure that no offences fall through the cracks when the referee thinks an act of foul play has occurred."

Another referee, Ian Smith, didn't think the white card would lead to a reduction in yellow cards.

"But it gives us another resource that we can use for an item that may not meet a red-card threshold," said Smith.

"I think anything that helps tidy up that judicial process, makes it slicker, is a good thing," he said.

"I see only positives in it."

In addition to the white cards, the citing commission has been streamlined, with any cited players to receive shorter bans if they plead guilty to their charges before the hearing. Hearings will also be conducted via video conferences in order to speed up decisions.