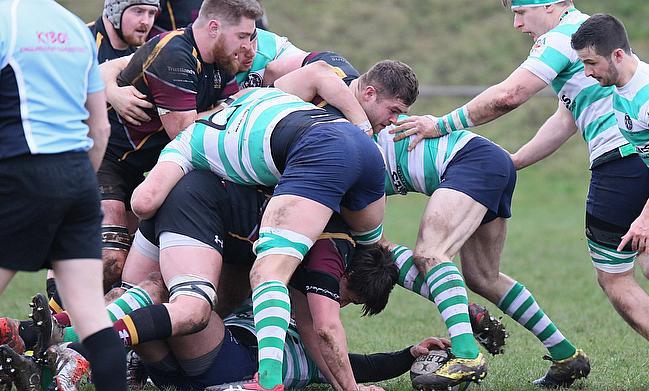 A superb display of kicking from South Leicester steered them to victory against Tynedale, who saw their 100 per cent start to the season come to an end.

The defeat for Tynedale in the Midlands now leaves them seven points behind top of the table Stourbridge who had no trouble in Round Eight as they maintained their perfect record.

Third placed Sedgley Park are now hot on the heels of Tyne as are the likes of Hinckley and Sale FC who also secured victories on the weekend.

Stourbridge made it eight consecutive wins in National Two North with a hard-fought victory over Midlands rivals Leicester Lions.

The league leaders led 12-3 at half-time thanks to tries from Joe Heatley and Jack Lea.

A penalty from Chris Scott and a touchdown from Nick Murphy created breathing space for Stour and scores from Devon Constant and John Murdoch for the hosts were not enough as the visitors saw out the game comfortably.

South Leicester ground out an impressive win in National Two North to inflict a first defeat of the season on in-form Tynedale.

The hosts shot out early to score the first try of the game, but Tyne were soon level.

Scott Lawson’s men then went ahead with an unconverted score, but a Rickie Aley penalty cut the deficit to two points heading into the break.

And it was the accuracy from the tee that won South this contest. Five successful penalty kicks outweighed Tyne’s third try of the afternoon as the home side earned their fifth win of the term.

Following Tynedale’s defeat, Sedgley Park moved to within two points of second place after a commanding victory over Luctonians.

They scored three first-half tries through Andy Riley, James Harrison and Callum McShane, while Matt Riley and Casel Chilvers sealed the win in the second period.

Adam Clayton crossed for Luctonians, but they were rarely close to the Manchester-based side.

Hinckley secured another home victory as they battled to this win over Sheffield at Leicester Road.

A brace from Steve Harvey and tries from Alex Salt and Joe Wilson put Hinckley 24-19 ahead at the interval, with Sheffield giving as good as they got through Rupert Broadley and four Stephen Depledge penalties.

Sam Driver’s try soon after the interval gave Hinckley a bit of a cushion, but they were pegged back by yet another penalty as Sheffield looked to turn this game around.

However, the newly promoted side failed to do so and any hopes of their first win of the season were dashed when Luke Coltman touched down late on to seal victory for George Chuter’s men.

Nic Doly scored the only try of the match just before half-time after Johnson had landed three quick kicks following good early territorial play by the hosts.

Lewis Barker did slot over three points for Macc midway through the first half, but his side failed to produce anything of note in the second period as conditions worsened.

However, Johnson kept his composure in the October weather and landed two more penalties to guide Sale to yet another home league victory.

Jamie Broadley scored two tries to help Sheffield Tigers edge past Otley and move into the top half of National Two North.

Chris Pond and Liam Wallace both scored for the Tigers in the first period as did the in-form Broadley who bagged his brace to give the hosts a 24-0 lead.

Otley hit back, but a score from Pete Swatkins just before the interval gave the home side a 22 point lead.

Mark Ireland’s penalty extended the Tigers’ advantage, but two converted tries for Otley gave them a glimmer of hope.

However, the hosts managed the remaining minutes well and Ireland’s second penalty sealed the victory.

Huddersfield earned a third National Two North win of the season as they maintained their positive start to come out on top against Wharfedale.

Brandon Conway extended Huddersfield’s lead, but Dale hit back through Joel Gill and Phil Woodhead just before the break.

Tom Barrett cut Huddersfield’s advantage with a penalty, but Malthouse added his second score of the day..

Will Milnor went over for Huddersfield’s seventh score of the afternoon which was enough to seal victory despite late tries from Tom Mann and Ben Parkinson.

After struggling in the early weeks of the season, Blaydon powered to their second win on the spin as they beat Chester to move up to 11th in the National Two North table.

Following just one win in their opening six matches after relegation from National One, Ally Hogg’s men are now showing signs of finally adapting to this level after a tough start.

An Alex Dodds try plus a penalty from Ryan Forman had given Blaydon a 10-0 lead at the break, but Chester hit back soon after the interval.

Colin Campbell and Ross White both went over to give the visitors a four point lead, but three tries in eight minutes by Blaydon took the game away from the Cheshire side.

Harry Borthwick, Jack Appleton and Tom Gorman all crossed as the home side clinched another triumph at Crow Trees.