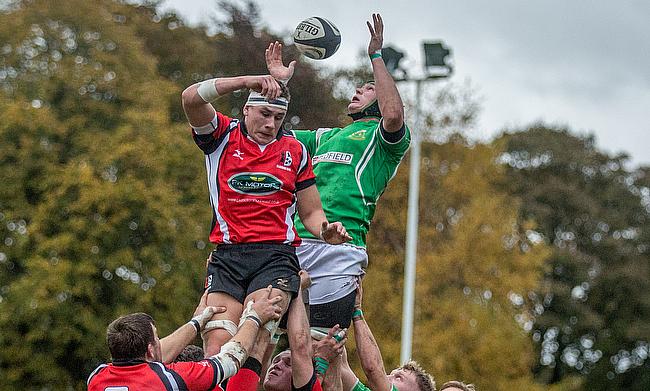 Blaydon registered a much needed victory against fellow strugglers Wharfedale thanks to an inspired performance from Joe Matavasi.

The fly-half kicked 17 points to help guide the Crows to just their second win of the season following relegation from National One in May.

Ally Hogg’s side are now just two points from safety in this early part of the season, but certainly profited in Round Seven as only one other side in the bottom half managed a victory.

That aforementioned club was Sheffield Tigers who also had a star performer as Jamie Broadley’s trio of tries helped them beat Macclesfield in Cheshire.

At the right end of the table, it was seven in a row for Stour as they fought hard for victory against Huddersfield while Tynedale edged past Sale FC, Sedgley Park beat Otley and Hinckley once again gained local bragging rights.

Elsewhere, Leicester Lions made it three wins on the spin and Chester beat Sheffield in Yorkshire.

Stourbridge scored three quick fire tries in the second half against Huddersfield to help secure their seventh straight win of the season.

A cagey first half from both sides ended level at 7-7 with Ben Morill cancelling out Ben Tibbetts’ try, but Stour showed just why they are top of the division immediately after the break.

Alex Hearle, Afeafe Haisila and Joe Heatley all crossed as Stour pulled clear and a fifth try of the match came just after the hour when Nigel Mukarati touched down from close range.

Shell-shocked Huddersfield rallied with Joel Hinchliffe and Brandon Conway closing the gap to 15 points, but the damage had been done earlier in the half as Stour stay at the summit.

Walker smashed his way past a number of Sale tackles to dot down his first try of the season, but Sale capitalised on a yellow card shown to Matt Outson as Nick Dolly went over from close range.

Sale missed the conversion and the visitors nearly snatched victory, but Chris Johnson’s drop goal sailed wide of the posts as Tyne maintained their 100 per cent start to the campaign.

Sedgley Park ended a run of two straight defeats on the road as they edged out Otley in a see-saw battle at Cross Green.

Sedge held a nine point lead at half-time thanks to three converted scores from Ben Black, Jamie Harrison and Ollie Glass, a penalty try and a Callum McShane effort while Otley responded via Paul Petchy, Simon Willet and Alex Beaumont.

Bob Birtwell and Joe Graham swapped tries after the break, but despite Stephen Collins landing a penalty to stretch Sedge’s lead, Otley levelled the game up on 69 minutes.

Scores from Grayson Maguire and Michael Coady set-up an intriguing final section of the game, but Harrison and Matt Riley made sure it was Sedge who claimed the points with two late tries.

Hinckley produced yet another derby win as they narrowly beat South Leicester in a thrilling encounter in the Midlands.

The visitors actually led this contest at half-time thanks to the boot of Rickie Aley and tries from Myles Bean and Adam Nunny, but only after Hinckley had gone ahead through an Alex Salt score.

However, Hinckley made sure they were right in this contest just before the break thanks to a penalty try and it took the hosts just 6 seconds after the restart to move ahead as Sam Driver ran in unopposed.

The game then ebbed and flowed as Bean grabbed his second before Gareth Turner crashed over from close range.

The reliable Aley then nudged his side into a 32-31 lead, but seven minutes from time, Callum Dacey scored what proved to be the winner as Hinckley moved up to fourth in the table.

Leicester Lions made it three wins on the bounce as they produced a dominant display to complete a bonus-point victory over Luctonains.

The visitors, who began the season with four straight defeats, ran in six tries in a rampant performance which has moved them up to seventh in the table.

Jack Heald’s men completely outplayed Luctonians who have now begun October with two defeats and did doesn’t get much easier for them next week when they travel to third placed Sedgley Park.

Chester secured their first away win of the season as they beat Sheffield at Abbeydale Road.

Both sides dotted down twice, but Chester were clinical off the tee as they seal their third victory from their last four games while Sheffield still remain winless and they are now seven points from safety at this early stage of the season.

The first-half was marred by an injury to Macclesfield captain Max Smith who broke his leg, but in his absence, the Blues continued to battle as Parry grabbed his second immediately after the interval.

Pete Swatkins hit back for the Tigers but a brace from Pete Sherratte either side of Parry’s hat-trick score brought Macc to within five points of their visitors.

However, there was no remarkable comeback by the hosts as Broadley delivered the hammer blow late on to clinch victory for Sheffield Tigers.

Blaydon secured a much needed win against fellow struggle Wharfedale at the Avenue.

Harry Borthwick scored a brace for Ally Hogg’s put it was a superb kicking display from Joe Matavasi which put them 24-0 up at half-time.

Tom Barrett and George Hedgley both crossed after the break as Dale asserted themselves on this contest, but Blaydon were able to weather the storm.

Matavasi kept Dale at arm’s length with yet another three points and despite Oli Cicognini’s late try for the home side, Blaydon had done enough in the first period to seal their second win of the campaign.