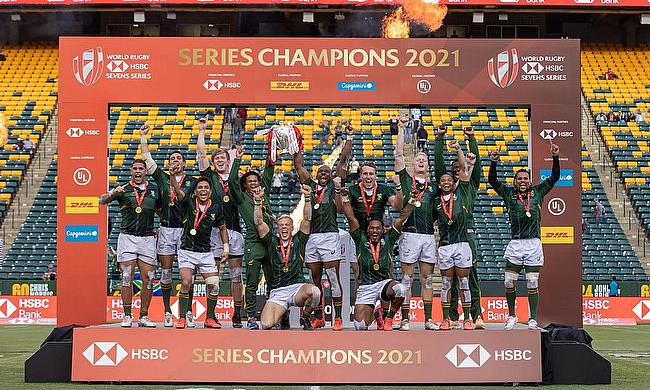 South Africa maintained their impressive form as they went on to win the Edmonton leg to clinch the HSBC World Rugby Sevens Series 2021.

Having locked horns with Great Britain in the final, the Blitzboks riding on double try efforts from Muller du Plessis and Siviwe Soyizwapi ensured they completed a 24-12 win.

The win follows their title win in the Vancouver leg as well as they maintained their perfect run in the series with 40 points while Great Britain settled for second place with Kenya finishing third. Olympic champions Fiji, New Zealand and Australia missed this year's edition of the tournament.

“It has been an awesome two weeks, we came here with a mission to stick together and focus on our system and build on that so I am very proud of the team,” said Muller du Plessis, who starred with 11 tries in Edmonton leg.

Earlier, South Africa completed the pool stage at the top with three wins and went on to blank Hong Kong 46-0 in the quarter-final before trouncing Kenya 33-7 in the semi-finals. Meanwhile, GB had a thrilling win over USA 21-19 and followed it with a 22-12 victory over Canada to reach the final.

“We normally have one game in the tournament where we make too many mistakes and probably this last one was this game for us but, again, with the new guys we have in the team, I am very happy with the performance over the two weeks,” said Blitzboks head coach Neil Powell.

Kenya too had a successful run as they defeated Canada 33-14 in the bronze medal game riding on a double from Alvin Otieno while Nelson Oyoo, Willy Ambaka and Billy Odhiambo also went over the line.