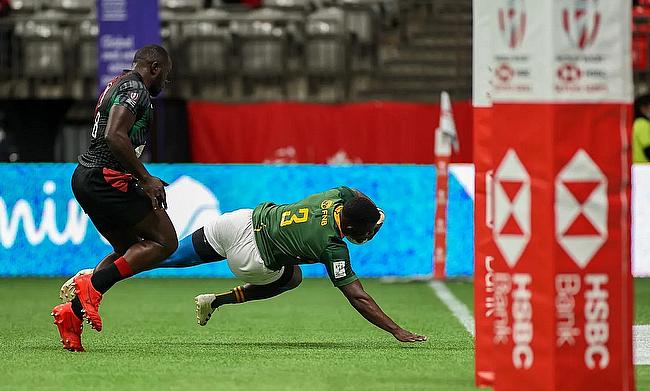 South Africa have successfully defended their title at the Vancouver leg of the Men's World Rugby Sevens Series with a 38-5 win over Kenya in the final.

The Blitzboks made a powerful start to the game with Angelo Davids scoring twice in the 2nd and 5th minutes. While the conversions were missed, Sakoyisa Makata and Christie Grobbelaar scored further tries while Dewald Human and Ronald Brown kicked conversions as they scored 24 unanswered points in the opening half.

South Africa were the quickest to get off the block with Christie Grobbelaar diving over early and Human improved it taking their lead to 31 points before Kenya finally managed to open their account with a touchdown from Daniel Taabu.

Nevertheless, Darren Adonis ensured that South Africa were the dominant of the two sides with a comfortable 33-point victory.

“I am really proud of the boys. After a disappointing Olympic campaign, coming here we really tried to lick our wounds and put up a fight. I am so grateful we could come up with the victory. Hopefully, all Africans were proud today,” said Blitzboks captain Siviwe Soyizwapi.

While Kenya finished second, Great Britain with a 24-14 win over Ireland ensured they secured the third place finish in the Vancouver 7s.

Earlier, South Africa went on to win all their three games in Pool A including the encounter against Kenya and trounced Kenya 54-5 in the quarter-final. They also went past Great Britain with a 26-12 win in the semi-final.

Meanwhile, Kenya registered 19-14 win over USA in the quarter-final followed by a 38-5 victory over Ireland in the semi-final.