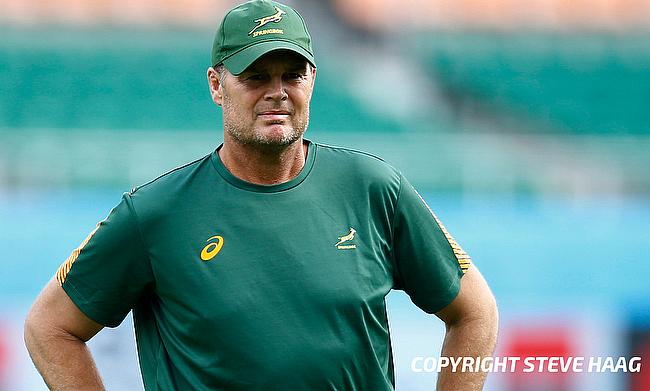 South Africa have cancelled their training on Sunday after three players were tested positive for Covid-19 ahead of the series against the British and Irish Lions.

The news follows after the testing conducted on Saturday morning with the squad's arrival in Johannesburg with their two-Test series against Georgia scheduled to be played on 2nd and 9th July.

Vincent Koch, Herschel Jantjies, and Sbu Nkosi were the three players tested positive and have been placed under isolation along with the rest of the squad as a "precaution".

Despite the setback, South Africa director of rugby Rassie Erasmsus expressed confidence that it won't affect the games against Georgia and the Lions.

"I don't think it's a big cause for concern but we want to keep everybody as safe as possible," he told a news conference.

"We have followed strict proposals and everyone is isolated at the moment.

"It is disruptive but it has happened to other rugby teams over the last months and we have enough players in our camp to go ahead with our matches.

"There is no threat to either the tests against Georgia or the Lions tour.

The Lions squad headed to Johannesburg from Edinburgh on Sunday night with their opening game scheduled on 3rd July against Emirates Lions.

"A decision on further team activities will be made shortly."