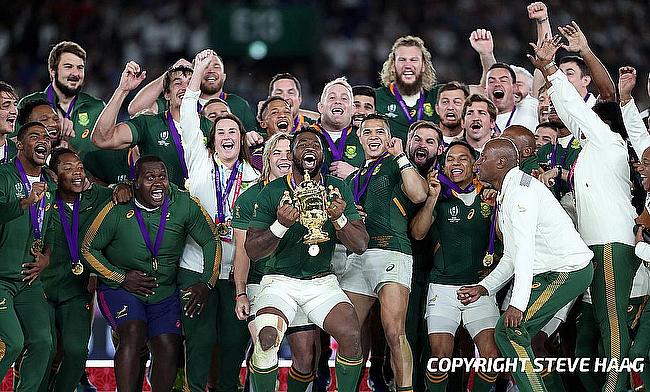 South Africa have named the matchday squad for the opening Test against Georgia to be played at at Loftus Versfeld on Friday.

This will be the first international game for the Springboks since their World Cup triumph in 2019 with the pandemic coronavirus disrupting their participation in the Rugby Championship and European tour last year.

Siya Kolisi will continue to the captain the side and is positioned at blindside with Pieter-Steph du Toit at openside and is joined at back row by Kwagga Smith.

Handre Pollard will take over the kicking responsibilities and will be forming halfback partnership with Northampton's Cobus Reinach.

This will also be the first game for South Africa under head coach Jacques Nienaber and he has named three debutants in the matchday squad with Aphelele Fassi start at left wing and Rosko Specman at right wing while Jasper Wiese is named on the bench.

Franco Mostert and Eben Etzebeth are the preferred locks while the front row comprises of Trevor Nyakane, Bongi Mbonambi and Ox Niche.

“We have selected the best team with an eye on what we would like to achieve in this Test against Georgia and we believe that we have a good balance with a number of experienced campaigners and a few young players who have made a strong statement this season,” said Nienaber.

“Most of the players in this squad are Rugby World Cup winners, while others have been part of the national squad for a few seasons, and this will be invaluable against a team that boast the passion that Georgia exhibit.

“We are also excited to see what the uncapped players bring to the table after impressive performances for their franchises in the last few seasons.

"Each one of them has proved that they deserve an opportunity at this level, and the commitment and enthusiasm they displayed at training has been striking.”

The second Test will be played on 9th July in Johannesburg.