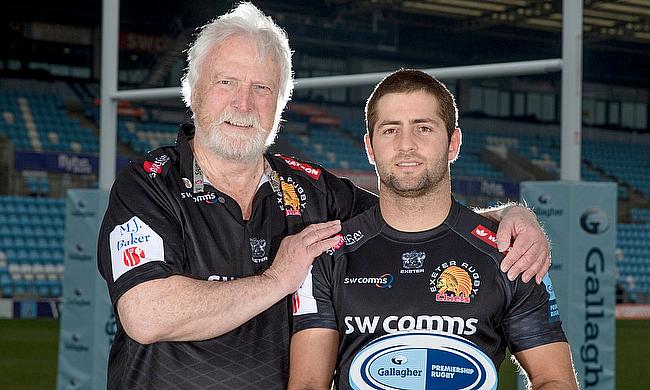 Exeter Chiefs’ full-back Santiago Cordero was today acclaimed as a world-class player after being named Gallagher Premiership Rugby Player of the Month for March 2019.

The Argentina full-back has been instrumental in the Chiefs’ rise to the top of the table and a key factor in their incredible season that has seen them book a home Gallagher Premiership Rugby semi-final.

Former England and Lions wing Ugo Monye praised Cordero saying: “During the last month, his performances have contributed heavily to the Chiefs’ qualification for the Gallagher Premiership Rugby semi-final in record time. He has been at the heart of everything that they have done. No one has beaten more defenders and his ability to create tries and beat players is second to none.

“He is doing it every single week – he has contributed every single match. He can offload brilliantly; his footwork is great and he can take contact well. Every defender on the pitch is scared – they’re on their back heels when he has the ball.”

Cordero was presented with his award by Exeter Chiefs’ super-fan and Gallagher Community Hero Bob Crowe-Swords.

Bob was one of 24 Community Heroes chosen by new title partner, Gallagher, at the start of the 2018-19 season. Each of the heroes was nominated by their respective Gallagher Premiership Rugby teams for embodying the core values and spirit of rugby and using their energy, commitment and passion to protect and grow the game.

Bob said: “I’m a member of Exeter Chiefs Supporters’ club and proud to attend every game, home and away. However, I’ve never presented a Player of the Month award to one of our players, so I’d like to thank Gallagher for giving me this opportunity - it’s been great seeing them supporting the rugby community through initiatives like this.”

Throughout the season, Gallagher, itself a passionate community broker, continues to support and shine a light on the positive work that is being done around the game as part of its ongoing commitment to both the professional game and the broader rugby community.

Cordero – as part of his prize for being named Gallagher Premiership Rugby Player of the Month – wins 25 tickets to a future Exeter Chiefs match to be gifted to a local club, school or community group of his choice.

Cordero was judged by a panel of experts as the player who made the biggest impact in Gallagher Premiership Rugby over the month of March.

He was involved in a six-way battle to win the award eventually beating Saracens lock Will Skelton, his team-mate Ollie Devoto, Gloucester Rugby’s Ruan Ackermann and Northampton Saints pair Rory Hutchinson and Cobus Reinach to the prize.