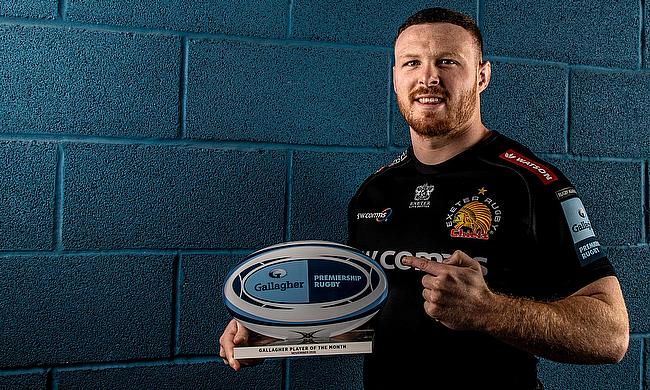 Ugo Monye today acclaimed the "absolutely phenomenal" Sam Simmonds as the Exeter Chiefs No 8 was named Gallagher Premiership Rugby player of the month for November 2020.

Simmonds has enjoyed a simply stunning start to the season scoring six tries in his side’s first three matches, and helping the Chiefs make the perfect start to their 2020-21 Gallagher Premiership Rugby campaign.

Monye, the BT Sport analyst and Gallagher ambassador, said: “Sam has been absolutely phenomenal. He’s just not stopped; he’s continued from where he left off last season which is a credit to him and his team.

“It’s his consistent ability to forever be present in every single conversation whether it’s attacking, defending and being at the top of the pile that seems to be the environment in which Exeter Chiefs have created.

“For all the talk of hybrid players at the moment, I think it’s the case that Sam Simmonds is one of those guys. He does everything you expect from a traditional back-row player; defensively very strong, gets over the ball in the open field.

“There aren’t many better devastating runners in the Premiership than Sam Simmonds and I’m talking forwards or backs.”

This is the first time Simmonds, 26, has captured the player of the month award having seen his brother, Joe, receive the accolade in March 2018.

Monye picked out Simmonds’s try on the opening day of the season, which was named Famous Grouse Try of the Week adding: “The solo try he scored against Harlequins was incredible. The power and lines of running to spot a gap and then his pace to gas Nathan Earle to the try line, he’s a remarkable player and Exeter Chiefs are very fortunate to have him at their disposal at the moment while he’s unwanted at international level.

“I think it’s really interesting, we often talk about a massive fact or feature in sport being emotion and it was clear to see that he’s been spurred on by him being surplus to requirements for England.

“I think it’s really important for almost every club to have local lads as local heroes – that’s what they [Sam and brother, Joe] are at Exeter Chiefs.

“When we look back at the history books of the Chiefs and their involvement in the season just gone by, their legacy is a very strong one at Exeter and of course they want to add to that.

“Sam Simmonds’ ability means he revels in the style of rugby in which Exeter Chiefs play. He seems to be the perfect fit for how they want to play and how they operate.”

“Here in Exeter we were still incredibly proud at the Chiefs having just delivered the double, when the highly talented local lad Sam Simmonds produced a headline hat-trick performance in the team’s resounding win against Harlequins in this season’s Gallagher Premiership opener followed by a brace in the Gallagher Premiership home win against Bath.

“What a start to the Chiefs’ defence of their title! Sam and the whole team continue to be a huge source of local pride for rugby fans and community-focused businesses like ours, especially during this challenging time. Rugby has never been a more powerful connector of communities and we are all looking forward to getting back pitch-side to voice our support loudly and proudly.”

Simmonds – as part of his prize for being named Gallagher Premiership Rugby Player of the Month – wins a shirt signed by the whole Exeter Chiefs squad and framed by Gallagher to be gifted to a local club, school, community group or charity of his choice to help raise funds for these causes.

Simmonds was judged by a panel of experts as the player who made the biggest impact in Gallagher Premiership Rugby in November 2020.

He was involved in a four-way battle to win the award eventually beating his brother Joe, Newcastle Falcons’ Gary Graham and London Irish outside-half Paddy Jackson.