Sale FC aiming to see off another promotion contender 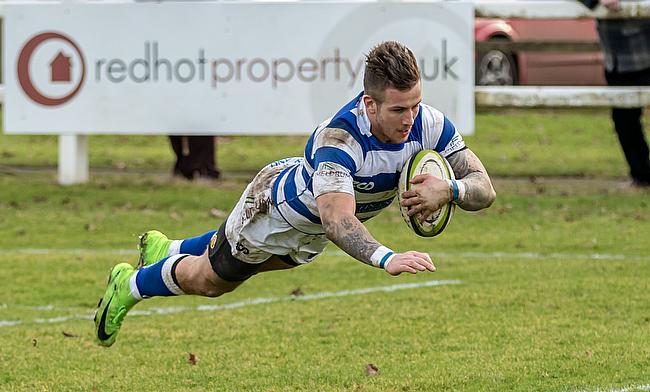 Sale FC went to the summit of National Two North in Round 20 following their victory over fellow promotion candidates Hinckley and now the league leaders face another test of their credentials.

Jonathan Keep’s side welcome Tynedale to Heywood Road this Saturday and a 25th league win from their last 26 home matches would keep them in control of the promotion race, but Tyne will have other ideas.

Second placed Hinckley will be aiming to bounce back in a local derby against South Leicester, while Sedgley Park host Otley and Stourbridge go to Huddersfield with just six points separating the top four in this division.

In terms of the fight to avoid relegation, Blaydon and Wharfedale meet in the northeast this weekend for another huge game towards the bottom of the division while Luctonians travel to Leicester Lions, Sheffield visit Chester and Macclesfield take the trip to Sheffield Tigers.

Last Sunday, Sale FC opened their new suite at Heywood Road in a week which saw them go clear at the top of National Two North. The drinks will have been flowing after Jonathan Keep’s side beat promotion rivals Hinckley in Round 20 and the Manchester-based club fully deserve to raise a glass to their recent run of form.

Sale host Tynedale this Saturday having won their last 12 matches which has seen them move into pole position in the promotion race, but the hosts will be aware that this fixture with Tyne is another hurdle they must overcome if they are to have a shot of reaching National One. The northeast visitors are very much in the top two picture as they sit five points off second placed Hinckley with two games in hand. The men from Corbridge will be without coach Scott Lawson this weekend as he has been named in Scotland’s squad to face Wales in Cardiff, but he will be hoping for a double success on the road as Tyne look to stay in the battle for promotion.

Second placed Hinckley will be looking to respond to the disappointment of losing against Sale FC. A fourth defeat against a promotion rival would have frustrated Hinckley last weekend and George Chuter’s side now know their task to stay in the top two has become more difficult, especially with the clubs below them all having games in hand. But, as things stand, the Midlands outfit remain in the play-off spot and Hinckley have more than enough quality to maintain a challenge for a promotion place. However, the Hornets will know they can’t really afford to put another foot wrong ahead of their trip to South Leicester in Round 21.

South welcome Hinckley to Welford Road having won just two games since the end of November and their inconsistent run of form cost them sixth place in the table last weekend. However, South will want to exact revenge in this local derby following their defeat at Leicester Road earlier in the campaign and if they were to achieve that aim, it would be a welcome win for the Midlands club.

It was the perfect end to January for Sedgley Park. A fourth straight win coupled together with Hinckley’s defeat against Sale FC leaves Matt Bebbington’s side just a point outside the promotion places heading into February. Sedge have been in excellent form and having negotiated a tricky month which contained fixtures against Hinckley and Tynedale, the Tigers are in a prime position to challenge for a top two spot.

Sedge have also lost just twice since October and have a 100 per cent home record so the task facing Otley this weekend won’t be an easy one. The Yorkshire side visit Manchester after suffering a defeat against Leicester Lions, but Peter Clegg’s men have won five of their last eight games which has seen them move out of the relegation places and up to 12th in table. Can they carry their good form into February and upset the odds this weekend?

Stourbridge delivered an emphatic response last week. Following a first defeat in four matches away at Chester, Neil Mitchell’s side bounced back in style as they ran in 15 tries to thrash Blaydon to enhance their promotion ambitions once again. Stour’s victory leaves them just two points behind second placed Hinckley with a game in hand and after a blip

But, they will have to be wary of an impressive Huddersfield side this weekend. The hosts, who were promoted from National Three last April, have been one of the stories of the season and their excellent campaign continued last Saturday as they moved up to sixth place in the table following victory over Luctonians. Gareth Lewis has also signed 22-year old back Sam Allan from Yorkshire Carnegie this week to add another pinch of quality to his side who are looking for back to back wins this Saturday.

Leicester Lions will be aiming to gain some ground on the teams above them this weekend when they host Luctonians. The Midlands side currently occupy eighth place in the division, but finally gained their first win of 2018 last Saturday following victory away at Otley. In fact, the Lions have a better record on the road than at home so they will be keen to add to their three triumphs at TMDP Park this Saturday.

They may fancy their chances against Luctonians who slipped to the foot of this division a week ago following a defeat to Huddersfield. However, Ryan Watkins’ side will be looking to retaliate when they visit the Midlands because despite winning just one of their last 13 matches, the men from Mortimer Park are one point adrift of safety and they also have games in hand over their relegation rivals. It is far from over for Lucts and a result against Leicester Lions would be the idea start to February.

Chester’s patchy form continued in National Two North last weekend. The men from Hare Lane have been incredibly inconsistent this season, especially over the last month. The Cheshire side host Sheffield this Saturday having won three and lost three of their last six matches, but all three of those aforementioned victories have come at home.

Indeed, the ninth placed side have lost just twice on their own patch this season and their visitors, Sheffield, are also a fan of home comforts. The Yorkshire outfit clinched their fourth victory at Abbeydale Road last weekend against South Leicester and it was a win which could prove crucial in their fight for survival. Sheffield travel to Cheshire just a point from safety and a second away triumph of the campaign could see them out of the bottom three come Saturday evening.

Sheffield Tigers are continuing to slide down the league table. After such a positive start to this campaign, the men from Dore Moor have struggled over the last couple of months and a run of nine straight defeats has seen them slip from the cusp of the top six to 10th in the league standings. Following a great escape from relegation last term, it is certainly a plus point to see the Tigers 13 points clear of the drop zone at this stage of the season, but the Yorkshire club will be desperate to pick up their first win since November.

They host a rejuvenated Macclesfield side this weekend with the Cheshire visitors now heading in the right direction. Despite suffering a defeat at home to Sedgley Park last weekend, Marshall Gadd has won four of his six matches in interim charge of the Blues and after teetering on the edge of the relegation places, Macc are now 11 points clear of the trapdoor. They will be keen to keep their recovery going this weekend and with the home side going through a bad patch, Macclesfield could heap more misery on Sheffield Tigers in Round 21.

This week, Wharfedale head coach James Doherty has stated that the majority of sides currently in the bottom half of National Two North are not safe from relegation just yet. Dale moved out of the drop zone last Saturday following their third win in four matches, but Doherty knows their revival must continue as they sit just a point above the bottom three. It has been an impressive fightback from the Yorkshire club thus far and they can take another huge step towards safety when they travel to rivals Blaydon this weekend.

Doherty, who was speaking to the Craven Herald this week, also expects their hosts to respond following their hammering by Stourbridge. The Crows slipped into the bottom three after that defeat and have now lost their last five games. The positive for Blaydon is that they do have games in hand over their fellow strugglers, but a win against Wharfedale this Saturday would be an almighty boost in what has been a tough season for the northeast outfit.