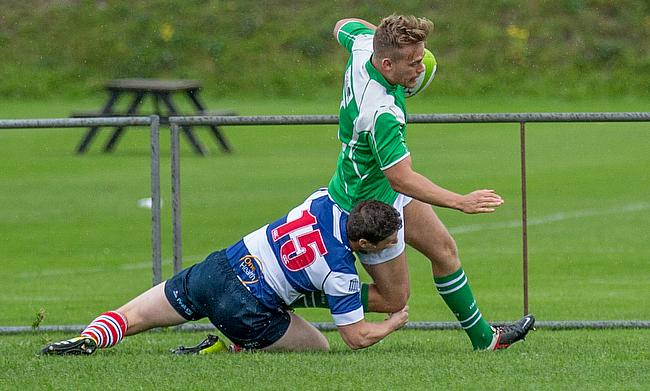 Disappointment may not be an option for sides battling for survival in National Two North this Saturday as two of the bottom four face one another in what could prove to be a vital weekend in the season.

Two of the sides in the relegation zone meet at the Avenue in Round 19 as Wharfedale host Sheffield and with Blaydon's match with Luctonians falling foul to the weather, the two teams propping up the division have a real chance to exert some pressure on the sides above.

At the right end of the table, Sale FC will be aiming to stay at number one for a second week when they entertain South Leicester, but the sides around them will be ready to pounce if Jonathan Keep’s men fall to a poor result.

Second placed Hinckley will be hoping to respond to their minor setback when they go to Sheffield Tigers while Stourbridge travel to Chester and fourth meets fifth as Sedgley Park take on Tynedale.

Elsewhere, Huddersfield are at home to Otley and Macclesfield take the trip to Leicester Lions.

Sale FC moved to the summit of National Two North last weekend following victory over Sheffield. Jonathan Keep’s side secured their 10th win on the spin and after Sedgley Park’s triumph against Hinckley, the men from Heywood Road took their place at the top of the pile. Straight after their win in Yorkshire, the club tweeted ‘there is still a long way to go’, but Sale have been on a fabulous run and it doesn’t look like it is coming to an end anytime soon.

Long way to go but this has a very nice feel about it https://t.co/ZsMRmcOABK

The Manchester-based side are back on home turf this week as they entertain South Leicester, knowing they have lost just one of their last 24 league matches in front of their own supporters. The assignment for South is a difficult one, but following a hard-fought victory over Sheffield Tigers, they will be in high spirts as they head up the A50. Richie Williams and his coaching staff will want to see some positive consistency from their side after a patchy run of results and having knocked Sale off top spot in September 2016, they will be hoping to halt their title ambitions once again this weekend.

Second placed Hinckley travel to Sheffield Tigers this weekend aiming to bounce back from their first home defeat of the season. A narrow loss to promotion rivals Sedgley Park saw George Chuter’s side move down to the silver medal position in the table, but it is a result Hinckley must not dwell on. Granted, league leaders Sale FC have a game in hand over the Midlands side, but Hinckley must focus on the here and now with two massive weekends coming up.

The men from Leicester Road entertain Sale at the end of the month, but first up is a trip to Yorkshire. Their hosts, Sheffield Tigers, have struggled of late and head into this fixture having lost their last six matches on the bounce. As a result, the men from Dore Moor are down to ninth in the table and after a very strong first three months of the season, this campaign is in danger of slipping away from them. The Tigers did show their quality in the first period against Sale FC a couple of weeks ago so they will be keen to replicate that display if they are to stop the rot this Saturday.

Stourbridge’s Nigel Mukakrati told us this week that the club are not thinking about promotion because they don't want to put unnecessary pressure on themselves, but the reality is, they are right in the mix. Stourbridge head into this fixture with Chester having won their last four matches which has catapulted them right back into the promotion hunt. After a winless run of four matches between November and December, Neil Mitchell’s side has shown great character and they are just two points off the top with a game in hand.

https://t.co/XSCHPPJbt5 "We know we are in the mix, but there is no pressure this season. We are just going about our business."@StourbridgeRFC's Nigel Mukarati speaks to the NCA for our latest 'In Focus' article. Photo Credit: Stourbridge RFC, Ceri Davies & Andy Cook. #Nat2n pic.twitter.com/WshjS8qV1e

The Midlands club will be aiming for five wins on the bounce, but looking to halt their charge towards the top two are Chester. The men from Hare Lane suffered a disappointing loss at Luctonians last Saturday as their inconsistent season continued. The Cheshire side are 10th in the table and nine points clear of the drop zone following just three wins since the start of November. But, Chester seem to be a different proposition on their own turf having won six matches there this term and they will be aiming for another successful outing in front of their own supporters in Round 19.

The huge fixtures in National Two North continue to come thick and fast as fourth placed Sedgley Park welcome Tynedale to Park Lane this weekend. Sedge strengthened their promotion ambitions immensely after victory over Hinckley last Saturday and the celebrations from Matt Bebbington’s men after the final whistle expressed how big of a result that was. It means Sedge are now just five points off the top two with a game in hand and they head into this crucial clash having won all seven of their fixtures at home.

The visitors Tynedale are also very much in the promotion mix. Scott Lawson’s side reacted to their defeat against Huddersfield in the best way possible as they brushed aside Leicester Lions to sit just seven points off the promotion places, but Tyne have two games in hand. The northeast club have won six of their last seven and they also beat Sedge 46-24 earlier in the year and a similar outcome would lift Tyne above the Tigers this weekend.

Huddersfield Head Coach Gareth Lewis was left frustrated following his side’s 20-15 loss to Macclesfield last weekend. Field dominated large parts of the first period at Priory Park, but they were made to rue their missed chances as they fell to their second loss from their last three matches. This mini blip in form certainly does not overshadow the season which the men from Lockwood Park are having and the seventh place side are back on their own turf when they host fellow Yorkshire side Otley.

Field have been superb at home this season, winning six out of their seven fixtures, but they welcome and Otley side which will be in a buoyant mood. Peter Clegg’s men have turned their season around in recent weeks having won four of their last six games, leading to them moving out of the relegation places. The men from Cross Green are now 12th in the table and six points clear of the drop, but they know the job is far from over as they go in search of their third away win of the campaign.

It has been a difficult start to 2018 for Leicester Lions. Jack Heald’s side have faced two of the promotion challengers to kick-off the New Year and it has been tough going for the Lions. Just one try against Hinckley and Tynedale highlights how challenging those two fixtures were, but they have the chance to spark their second half of the season into life when they welcome Macclesfield to the Midlands this weekend.

The Lions have won on just three occasions at TMDP Park this term so a confident Macclesfield side might fancy their chances. It has been a huge three weeks for the Cheshire outfit and in particular, interim Head Coach Marshall Gadd. The Blues have secured three successive victories which has lifted them to 11th in the table and eight points clear of the drop, but Macc also have two games in hand. It has been a tough campaign for the side relegated from National One last April, but another win this weekend would continue to boost the morale at Priory Park.

A massive game at the bottom of National Two North is taking place this weekend as Wharfedale host Sheffield. Dale are propping up the division as things stand, but James Doherty’s side are eight points off safety so there is still every chance the Yorkshire side can dig themselves out of trouble. Two wins from their last five fixtures as certainly given them a shot at survival, but a second home victory would be vital in their fight against the drop.

Both Wharfedale and Sheffield cannot move out of the bottom three this weekend, but the visitors could go to within a point of safety if they pick up maximum points at the Avenue. Currently, Adam Byron’s side are six points off 13th place and they will be looking to bounce back after tough outings against Sale FC and Stourbridge. Sheffield will know that their status in this division could hinge on fixtures like this one against Dale so a fifth win of the campaign this weekend may well be crucial.