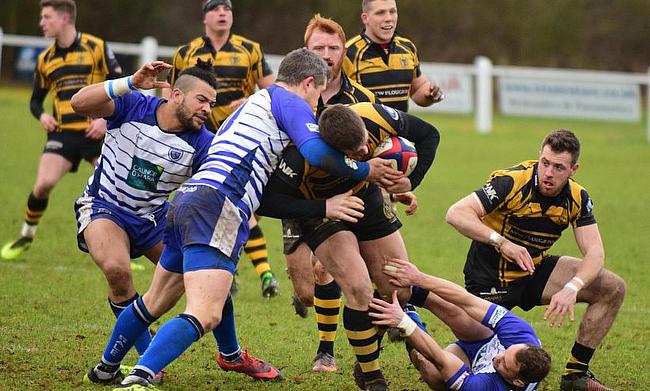 Sale FC secured their twelfth consecutive win to move clear at the summit of National Two North as they came out on top against promotion rivals Hinckley.

Jonathan Keep’s men now have a four point gap between themselves and the Midlands side, but a victory for Sedgley Park and emphatic wins for Stourbridge and Tynedale mean second placed Hinckley are just a point clear of the chasing pack.

Down at the bottom, Wharfedale’s third win in four matches has seen James Doherty’s side lift themselves out of the relegation places.

Victory over Chester means Dale are a point clear of the drop zone and close behind the Yorkshire outfit are Sheffield who also picked up a vital win against South Leicester.

Elsewhere, Huddersfield are up to sixth following a hard-fought win away at Luctonians and Leicester Lions tasted victory for the first time in 2018 after beating Otley.

Sale FC have moved four points clear at the top of National Two North as they beat promotion rivals Hinckley in the top of the table clash at Leicester Road.

Sale led 16-5 at the break thanks to a Jake Barron try and three penalties from the boot of Chris Johnson.

Dave Peck had crossed for Hinckley just before the break, but another penalty from Johnson stretched Sale’s lead to 14-points.

What an awesome effort from @SaleFC dogs yesterday away @Hinckley_Rugby. Every player put their body on the line and worked for each other! Now for the official opening of @thesuitesale today. #dogs #onesalefc #neworder

But Hinckley rallied back as a Joe Wilson penalty was followed by Alex Salt’s score and with 10 minutes to play, Sale’s lead had been cut to six points.

However, Arron Reed’s intelligent interception allowed him to ultimately clinch the win for Sale as he crossed for their second try of the afternoon.

And despite having two players in the sin-bin and conceding a late Callum Dacey try, Jonathan Keep’s side held on for the win.

Sedgley Park are now just one point outside the top two places in National Two North after they came from behind to beat Macclesfield.

Sedge found themselves four points ahead at the break following scores from Matt Riley and Andy Riley, but only after Charlie Reed and Sam Broster had given Macc at 10-0 lead.

With the hosts looking for a response after half-time, Sedge delivered a blow to their chances as Bob Birtwell touched down.

Macc did react as Tom Morton struck over three points, but a Penalty Try 12 minutes from time clinched the win for Sedge, despite Ryan Parkinson scoring from close range late on.

Stourbridge responded from their defeat at Chester in style as they recorded a 15-try victory over Blaydon in the Midlands.

Nigel Mukarati scored a hat-trick and Dan Rundle grabbed a brace for Stour, who are now just two points off second placed Hinckley.

Daniel Marshall, Hugh Mongan and Matt Charlton went over for Blaydon, but this was another tough afternoon for the Crows who are now in the relegation places.

Tynedale strolled to an emphatic victory over Sheffield Tigers at Corbridge.

Tyne dominated against the Tigers and ran in 11 tries to inflict a ninth straight defeat on the Yorkshire outfit.

Huddersfield beat Luctonians to record their first win in three National Two North matches to move up to sixth in the table.

Field scored the opening try through Francis Enstressengle before Austen Thompson doubled their advantage inside the first quarter.

Things went from bad to worse for Lucts when Zac Watkins was dismissed, but that seemed to spark the hosts into life as they led 18-15 at the break following scores from Frank Kelly and Seb Robinson as well as eight points from the boot of Sam Boxhall.

Brandon Conway had gone over for Field just before half-time and his side managed to take control of this frantic encounter as Joel Hinchliffe put the visitors back in front.

Lucts had no answer to Conway’s second score just before the hour and Thompson also bagged his brace late on to secure the win for Gareth Lewis’ side.

Sheffield moved off the bottom of National Two North following a narrow win over South Leicester in a tight encounter at Abbeydale Road.

The Yorkshire side are now just a point from safety in this division and their latest victory on home turf was ensured by Stephen Depledge’s second-half penalty.

Depledge also converted Dave Clayden’s first-half score and despite South landing a penalty, Sheffield held on for the win.

Otley’s excellent recent form was dented as they lost at home to Leicester Lions, who secured their first win of 2018.

Leicester’s Jon Boden landed an early penalty before tries from Alex Wilcockson, Harry Key, Daniel Ali and Harry Clement put the Lions 25-7 up at the break.

Tom Hodson had dotted down in the first period for Otley and scores from Brett Mitchell and Michael Coady moved the hosts to within eight points of the Lions with 20 minutes remaining.

However, Jack Heald’s side were able to see the game out to clinch their maiden win of this calendar year despite Joe Rowntree’s late penalty.

Wharfedale dug deep to move out of the relegation places in National Two North following a gritty win over Chester at the Avenue.

Braces from Alick Croft and Charlie Graham left it 12-12 at the interval.

Tom Barrett and James Preston both exchanged penalties after the break before Kieran Frost put Wharfedale ahead on 59 minutes.

Craig Ross responded for Chester, but Preston could not land the conversion as Dale hung on for a vital win which moves them a point clear of the danger zone.