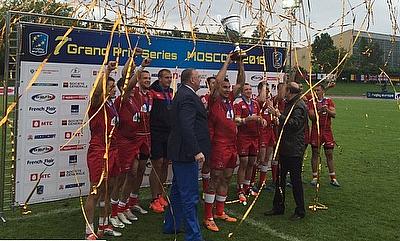 Having sealed a thrilling victory at the Moscow Sevens just last month, Russia will be confident that they can achieve success in a group that includes developing nations Georgia and Lithuania. Russia’s biggest challenge in Pool A is likely to come from a Spain side buoyed by their recent qualification for the Olympic Games.

Host nation Great Britain will have two teams in action, Great Britain Royals and Great Britain Lions. With a place in the Team GB Olympic Sevens side up for grabs, the players will want to improve on a low key performance in the first leg and impress in front of a home crowd.

Great Britain Royals have been drawn in Pool B along with a France team who suffered defeat to Russia in the final of the Moscow leg of the Series. With Olympic ambitions of their own, France will be hoping to go one better this time round. An experienced Portugal side and an up and coming Poland team round out Pool B.

In Pool C, an impressive Germany side could be the biggest threat to Great Britain Lions. The Germans reached the Cup Semi-Finals in Moscow, before falling to a talented France team. Italy and Belgium are the final teams in an evenly balanced pool. The two sides met in the Moscow Sevens Bowl Final, where Italy came away with a narrow 14-12 victory.

Going into the weekend, all eyes will be Great Britain’s Mark Bennett. Playing for Great Britain Lions, the Scotland International was the top try scorer in Moscow. His seven tries saw him finish as one of the top point scorers in the tournament, second to only France’s Johan Demai-Hamecher who scored 37 points. If Bennett can continue his fine form in Exeter, he will be close to guaranteeing himself a place in Great Britain’s Olympic squad and a trip to Rio.

The Rugby Europe Exeter Sevens Grand Prix Series will be shown LIVE on Sky Sports in the UK and LIVE-Streamed and free of charge at Rugby Europe TV in the rest of the Europe. For more details visit rugbyeurope.tv.

The Rugby Europe Sevens Grand Prix Series will continue with the third and final leg of competition in Gdansk, Poland on July 16-17.