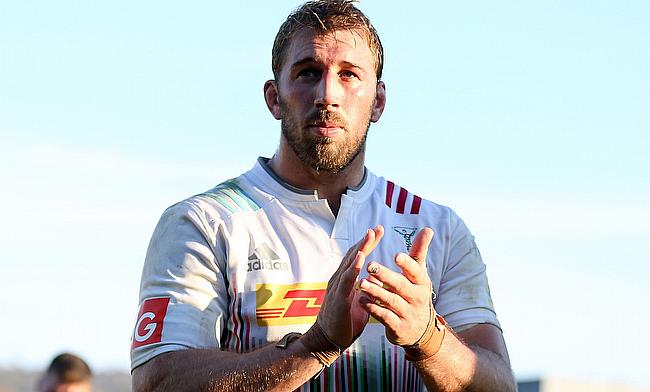 Robshaw, who was Red Rose skipper throughout the reign of Stuart Lancaster, will be a late arrival at a Harlequins social event being held by former wing Ugo Monye after arranging to speak to Jones.

It will be the first time they have met with Jones stating upon his appointment a fortnight ago that a face-to-face meeting with England's incumbent captain and openside is a top priority.

"Chris is seeing Eddie for a coffee at some stage this evening, so he probably won't be joining the crew, at least for a while," said director of rugby Conor O'Shea after Quins' 38-7 Aviva Premiership victory over London Irish.

Jones' arrival at Twickenham was delayed until Friday due to visa issues and Harlequins' bonus-point victory at Twickenham Stoop was the first match he has attended since replacing Lancaster.

The 55-year-old Australian, his head covered by a black beanie hat amid blustery conditions in south west London, was flanked by Rugby Football Union chief executive Ian Ritchie and was present in the same executive box as Premiership Rugby supremo Mark McCafferty.

Jones was critical of Robshaw during the World Cup, stating in a newspaper column that "at international level he just doesn't have that point of difference", describing him as "workmanlike" and a "six-and-a-half at best".

O'Shea, however, rates the 29-year-old back row very highly and insists his England career is far from over.

"Chris was outstanding against Irish, like he was against Exeter. I cannot speak more highly of him and what he has done for this club. There's a lot left in him," O'Shea said.

"Chris is in a high profile position and will get criticism, but he deserves to be lauded for what he is rather than being pilloried because there are so many people in sport who aren't proper role models.

"Chris is a proper role model and a great rugby player. Hopefully he showed that to Eddie out there."

By coincidence, O'Shea met with Jones at a Twickenham hotel before Saturday's rout of Irish.

"We met up at the Marriott across the way before the game to do something different. Eddie happened to be there and we had a good chat," O'Shea said.

"It was good for him to be here because we're still the number one club when it comes to bringing English players through."

Scotland wing Tim Visser, who arrived at Twickenham Stoop during the summer, scored a hat-trick of tries in a bonus-point victory that strengthens Quins' push for top-four finish in the Premiership.

"Tim has settled really well at the club. The boys like him. They might get stuck into his accent, which is a mix of Newcastle, Dutch, Scottish. He's a great bloke," O'Shea said.

"We wanted to be ruthless, but also talked about being patient. Our boys looked unbelievably controlled. That's another step along the way of a long season, but we'll be right in it.

"It will be never ending this season but I'm excited and this win puts us in a very strong position. We look to be a very good place."

O'Shea stated that Wales centre Jamie Roberts will make his club debut against Calvisano at Twickenham Stoop on December 19.

"There's not a lot we can take out of that. Harlequins were good. We were totally outclassed and I don't think we won any aspect of the game," Coventry said.

"Their momentum was good, they kept coming and created lots of opportunities."