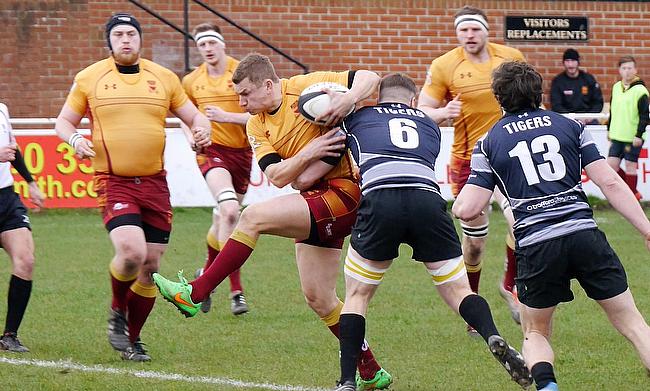 Like last season in National Two North, the relegation battle has gone to the final day of the campaign and arguably it is even closer than 12 months ago.

Five teams are still in danger of the drop, but only one can be officially relegated to National Three. Huddersfield and Broadstreet have already had their fate sealed and one of Sale FC, Sandal, South Leicester, Chester or Tynedale will join them in the fifth tier of English rugby next term.

As it stands, Sale FC occupy the final relegation spot despite beating champions Macclesfield on Saturday. They are also level on points with Sandal who beat Otley at home, but Sale do have a game in hand over the Yorkshire side.

Above those sides sit South Leicester and Chester who are a point clear of the drop after both suffering defeats in Round 29 while Tynedale sit three points clear of the bottom three despite their loss to Harrogate.

From the relegation battle to the top two where Sedgley Park confirmed their play-off place after a comfortable with over Preston Grasshoppers. Sedge will now take on either Cambridge or the Old Albanian for a place in National One next season.

Sale have now won their last two games and remain level on points with Sandal who are in the final safety spot in the division.

Sale stay in the bottom three on ‘Games Won’, but do have a game in hand over Sandal. As for Macc, the treble was confirmed last week for the Cheshire side and they will now be planning for life in National One next term.

Sedgley Park confirmed the play-off spot in National Two North after running in 10 tries on their way to victory against Preston Grasshoppers.

A penalty from Lewis Allen was the only reply Preston could muster up before half-time, but they did score their first tries of the afternoon after the break when Reece Tomlinson and Harry Moulding both touched down following a score from Sedge’s Rob Holloway.

The hosts then went through the gears once again as Riley along with Sam Lothian and Matt Lamprey all crossed.

But, Preston managed to secure a losing-bonus point in Manchester as Allen brilliantly fashioned tries for Jacob Browne and Charles Hough.

This win for Sedgley now means they will play either Cambridge or Old Albanian away from home in the play-off while Preston will looking to try and finish in the top half of the table when they host Chester this coming Saturday.

Charlie Thacker was the only man to cross for South all afternoon meaning that the visitors are now just a point clear of the relegation zone with one game remaining.

As for the Lions, they now know a bonus point win from their final match of the season at home to Tynedale next weekend will give them a top three finish and cap off a brilliant season.

Stourbridge bounced back from their home defeat against Sale FC with a gutsy win over the Luctonians at Mortimer Park.

Tries from Mike Cheasley and Nigel Mukarati made the scores 5-5 before Joe Carpenter darted over to give the away side the lead at the break.

Ashley Elvers crossed for Stourbridge after the restart to give them a 19-5 lead before Josh Watkins responded for Lucts with his score.

Centre Joe Heatley then restored Stour’s lead and they were able to hold on for victory despite a late flurry from the home side which saw Henry Monkley and Dan Smith both go over. Stour remain level on points with third place Leicester Lions while the Luctonians stay in the top half of the National Two North table.

Chester’s relegation worries increased on Saturday after they suffered a narrow defeat against Caldy at Hare Lane.

Caldy scored two tries throughout the afternoon via Nicholas Royle and Benjamin Eaves with Gavin Roberts converting two of them and he also slotted over three penalties on route to victory.

Harrison Vare and Tom Gregory scored two fine tries for the home side in the first-half and a score from close range in the second 40 helped Chester earn a crucial losing bonus point.

The defeat for Chester leaves them just a point clear of the relegation zone meaning they require a bonus-point win away at Preston Grasshoppers this coming Saturday to guarantee their safety in National Two North.

Tynedale’s survival hopes in National Two North took a slight dent on Saturday as they fell to defeat against a clinical Harrogate side at Ruddling Lane.

Harrogate, who are going through their best spell of the season, were 16-11 ahead at half-time through a Harry Barnard try and 11 points from the boot of Lewis Minikin.

Rob Parker’s penalties and a score from Ben Duncan brought Tynedale’s only points of the half, but they fell further behind when Luke Edwards crossed after the restart for ‘Gate after intercepting Parker’s loose pass.

Parker did land his third penalty of the afternoon shortly after, but a yellow card to Nick Cairns allowed Minikin to stroke over another three points for the hosts who now had a 12 point lead.

And Minikin rounded off proceedings with another penalty to take his total to 19 points and cement Harrogate’s place in the top half of National Two North for this season. As for Tyne, they are now just three points clear of the drop and take the trip to Leicester Lions this coming Saturday requiring just three points to secure their safety.

Sandal’s road to survival continued on Saturday as they stretched their unbeaten run to three matches following this victory over Otley.

As things stand, Sandal are out of the bottom three still on ‘Games Won’ but realise Sale do have that game in hand. As for Otley, this was their fifth defeat in a row which has seen them drop out of the top six.

Huddersfield edged out Broadstreet 29-28 at Lockwood Park in a meeting of two sides who are already relegated from National Two North.

Broadstreet led at half-time thanks to three converted tries only after Lewis Bradley had gone over for Huddersfield early on.

Henry Ward then went over for Huddersfield and Chris Bell’s last minute conversion won it for the home side who picked up only their seventh victory over the campaign.