Immediate return to National One for Macclesfield 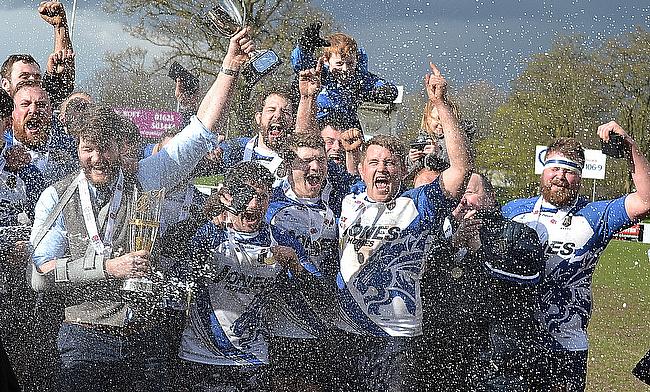 This season couldn’t have gone much better for Macclesfield. Following relegation from National One, they had to dust themselves down and go again and they have gone about that in the best way possible by gaining promotion at the first time of asking.

Their win on Saturday against Chester was enough for the Blues to crowned champions of National Two North as they now prepare for life back in the third tier of English rugby.

With Macclesfield going on to bigger and better things, Broadstreet unfortunately went in the opposite direction as they were relegated to National Three Midlands following their defeat to Leicester Lions on Saturday.

With now just one place left in the relegation zone, Sandal fought back against Tynedale to earn a draw while Sale FC took a massive step towards safety with a surprise win at Stourbridge and South Leicester also put on an impressive display at home to Harrogate.

Elsewhere, Sedgley Park’s play-off hopes took a minor setback with an away defeat against Caldy while Luctonians and Preston Grasshoppers secured their places in National Two North thanks to notable victories.

Macclesfield fought back from a slow start against Chester to clinch the National Two North title.

After relegation from National One last year, Macc have been front-runners for promotion for most of this season and led this all important contest 14-7 at half-time at Priory Park.

They scored tries through Josh Fowles and Charlie Venables only after Chester had deservedly gone ahead via a Will Bown score.

The first half performance from Chester was impressive, but they fell away in the second period as winger Fowles completed his hat-trick while Ryan Parkinson touched down for the hosts who were also awarded a Penalty Try on their way to securing the title.

Chester did have the final say when Lukas Owen-Ziegenbalg crossed late on, but it wasn’t enough to spoil Macclesfield’s party.

Macclesfield Coach Giles Heagerty: “When we punched through for that fourth try I was a little bit overcome but I’m just so pleased for the boys. They have worked so hard and they deserve all of the plaudits.”

“We were a little shaky early on, but we settled and played very well. After how tough last season, some of the rugby that has been played over the course of this season, is a credit to how hard the boys have worked.”

Sedgley Park’s play-off ambitions suffered a slight dent on Saturday as they were beaten in an eight-try thriller against Caldy.

An open first half ended with Caldy firmly in control after tries from Forbes Edwards, Nicholas Royle and Benjamin Eaves made up for the Wirral sides slow start which saw Daniel Waddy cross for Sedge.

But, the hosts regained their grip on this encounter as Jack Lavin, Royle again as well as seven points from the boot of Gavin Roberts gave Caldy a 34-12 lead with 15 minutes still left to play.

Andrew Riley dotted down for Sedge in the final 10 minutes, but it was merely a consolation.

Defeat leaves Sedgley Park still in second place, but they are now ahead of Leicester Lions by just nine points with three games left to play.

Broadstreet have been relegated from National Two North following this home defeat to Leicester Lions.

‘Street, who finished seventh last season, have been unable to build on their achievements of last term and after a two year stay at this level, they will be plying their trade back in National Three for the 2016/17 campaign.

In this contest with Leicester Lions, the visitors took a 19-7 lead through tries from Oliver Taylor, John Murdoch and John Hargreaves.

Broadstreet’s only points of the first period came from a Liam Hills score and they were also awarded a Penalty Try after the break to put them within five points of Leicester.

But the Lions stretched their lead once again via Steven Allen and Matthew Tuckey tries.

And a further score from Benjamin Spokes following a yellow card to Broastreet’s Lee Chapman was the final nail in the coffin for the home side who have won just eight times this season.

Sale FC picked up a vital victory on Saturday as they stunned Stourbridge to boost their survival chances in National Two North.

The visitors led 10-3 at half-time with Thomas Alies scoring the only try of the first period while Liam McGovern kicked the conversion and a penalty.

McGovern landed two more penalties after the interval to stretch Sale’s lead before both sides were reduced to 14 men as we entered the final 10 minutes of this contest.

Joseph Carpenter and Samuel Stelmaszek were both sin-binned and both teams managed to score a try apiece in their absence. Firstly, Joseph Bridger dotted down for Stour’s first try of the afternoon, before John O’Donnell wrapped up proceedings for Sale with his try in the final play of the game to secure his side a huge victory.

The win for Sale keeps them in the relegation zone, but they are level on points with Sandal – who occupy the final safety spot – and Sale also still have a game in hand. As for Stourbridge, this defeat looks as though it has ended their play-off challenge as they now sit nine points behind Sedgley Park.

Aiden Cheshire scored a late try as the Luctonians fought back to beat Otley at Cross Green in a thrilling game.

The visitors led 15-14 at half-time through a brace from Josh Watkins and a penalty from John Morris while Kristian Sharples and Matthew Heaton crossed for Otley.

Anthony Marfell and Max Hill were also sin-binned for the Luctonians during the first period, but Otley couldn’t take full advantage of their two extra men.

Instead, the Luctonians pushed on after the break as Watkins completed his hat-trick while James Norris sealed the bonus-point for the away side who now had a 25-14 lead heading into the final quarter of the match.

However, they saw their lead disappear in a five minutes period as Heaton along with James White darted over for Otley to put them in front for the first time in the game.

But, that advantage was wiped out on 74 minutes as Cheshire touched down for the Lucts to snatch victory from Otley and secure their survival in National Two North for next season. In terms of Otley, it is now four defeats in their last five games, but they remain in the top six.

South Leicester took a huge step to safety in National Two North following this excellent display at home against Harrogate.

South are now six points clear of the relegation zone after this victory and this was the perfect preparation heading into the Leicester derby this coming Saturday.

Willem Enslin gave Harrogate the lead in this contest, but the hosts accumulated 36 points to earn the bonus point.

Tries from Charlie Thacker (2), Jacob Heath and Gareth Turner as well as a Penalty Try put the home side in complete control.

Lewis Minikin and Callum Irvine both crossed for Harrogate late on, but it was too late for them to turn this game around as South moved closer to survival.

Preston Grasshoppers secured their place in National Two North for next season in style as they ran in eight tries on their way to victory against already relegated Huddersfield.

Huddersfield could only manage a first-half try by Thomas Owen and two second-half scores from Ross Thornton and Chris Bell.

Preston are now 11 points clear of the relegation zone with two games left to play while Huddersfield will now finish bottom of National Two North following this latest defeat.

Tynedale and Sandal could not be separated in an entertaining draw at Kingston Park as both sides continue to fight for their survival in National Two North.

Sandal’s Luke Norbury scored the opening try of the evening, before two Greg Wood penalties put the away side 11-5 up at half-time with Daniel Marshall responding for Tynedale following a yellow-card shown to Mark Pease.

Marshall then dotted down once again after the break to put Tyne to within a point of their visitors before winger Oliver Walker darted over to give the north-east side the lead.

However, two more penalties via Wood levelled the scores with eight minutes on the clock remaining, but neither side could do enough to snatch the win.

The draw means that Tynedale are 10th in National Two North and eight points clear of the bottom three while Sandal are out of the relegation zone on ‘Games Won’ as things stand.