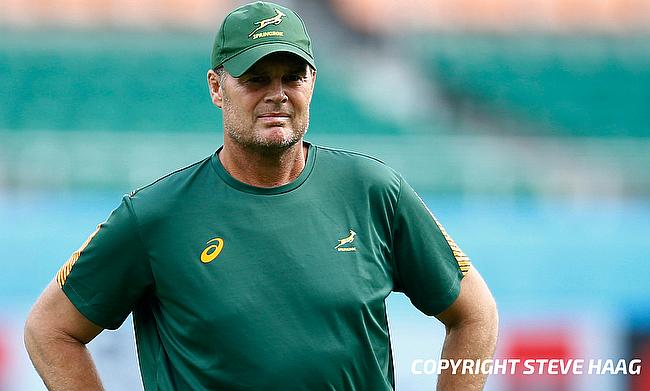 South Africa Rugby and Rassie Erasmus have jointly withdrew the appeal against the ban imposed by World Rugby for criticising match officials during the series against the British and Irish Lions.

The governing body handed a two-month ban to Erasmus, who guided the Springboks to a World Cup triumph in 2019 after he released a 62-minute video following South Africa's first Test against the British and Irish Lions criticising the match officials especially Australian referee Nic Berry while listing out 26 decisions that went against the Springboks as they succumbed to a 17-22 defeat.

Erasmus was also suspended from all match-day activities, including coaching and media engagement until 30th September next year and a warning was issued to his future conduct. He was also asked to issue an apology to the relevant officials.

SA Rugby was fined £20,000 and warned over its future conduct after two counts of misconduct were upheld.

Nevertheless, Erasmus and the South African board now have decided against lodging an appeal against the decision and have issued a public apology to the match officials.

“SA Rugby and Rassie Erasmus wish to apologise to the match officials appointed to the first Test of the Springboks’ Series against the British & Irish Lions,” the statement read.

“We also confirm that SA Rugby and Erasmus have advised World Rugby that they withdraw their Notice of Appeal and will not lodge an appeal against the sanctions imposed by the Judicial Committee.

“This has been a highly stressful and charged environment with unusual pressures placed on all concerned and we have no wish to prolong that experience for anyone.

“We have drawn a line under the incident and only wish to look forward. We will respect the outcomes of the hearing, allowing our national teams and rugby operations to plan with clarity for the coming months.”