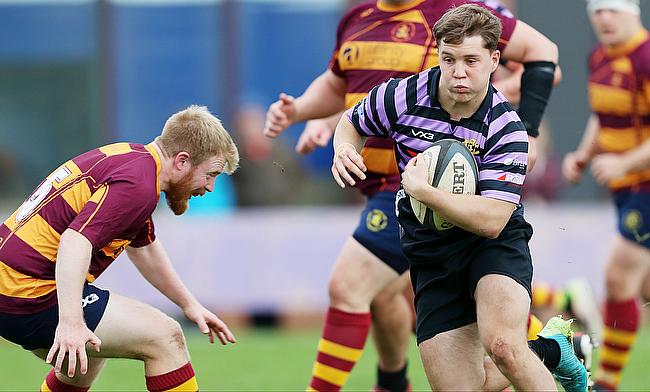 Following the first rest week of the season, the National Leagues are back and the battles for top spot in the fourth tier are shaping up nicely.

The first break in the National League season would have felt like a long one for league leaders Cinderford after suffering their first defeat of the campaign. Their loss to fellow promotion candidates Rosslyn Park would have stung, but Paul Morris’ side can keep a tight grip on top spot if they are able to bounce back at the first time of asking against Bishop’s Stortford in Round 10.

The visitors to Dockham Road may have been relieved to have a weekend off last Saturday as Stortford concluded the opening block of the term with four straight defeats to their name. However, Tom Coleman’s side - who sit one place above the bottom three - have been on the wrong end of some narrow scorelines so they will be hoping for a more positive outcome in Gloucestershire.

At the end of last month, Cinderford’s lead at the summit was cut to seven points by the aforementioned Rosslyn Park who travel to Birmingham Moseley on Saturday. Kieran Power’s side lifted themselves into second spot following their triumph over the Foresters and with a game in hand, Park will be keen to build on that excellent 38-31 victory.

While most National League teams had their feet up last weekend, Birmingham Moseley were in action against Taunton Titans, but  Adam Balding’s men could not begin November in a positive fashion. After the original fixture was pushed back by seven days due to a Covid outbreak in the Midlands squad, Moseley did turn around a 15-point deficit in Somerset only to be pipped by Taunton 22-19. They now return to Billesley Common where they have won their last two matches so can they make it a hat-trick and upset a title contender?

The boys are back ?? Home ?? A big game against @BSRUGBY on Saturday, this fixture is always a big test for both teams!

It might not have been the ideal start to the month for Birmingham Moseley, but it was a bonfire weekend to remember for Leeds Tykes. Phil Davies’ side battled hard to secure just their second win of the season against Blackheath and it means the Yorkshire outfit are just one point away from climbing out of the bottom three.

The 27-25 victory will undoubtedly give them confidence when they take the trip to Caldy in Round 10, but the hosts also have a spring in their step. Throughout October, Gareth Davies’ men didn’t taste defeat and in fact, they resume their National One duties on a six-match unbeaten run. They haven’t lost in almost two months so the Wirral outfit will be keen to pick up from where they left off on Saturday.

Elsewhere in National One, Sale FC can move into the top three, but that won’t be easy when they travel to an in-form Darlington Mowden Park whilst fifth-placed Chinnor host Plymouth Albion.

Also in the third tier this weekend, Taunton go to Blackheath and Cambridge - whose last defeat came back in September - take on Tonbridge Juddians.

And as luck would have it, The National League Rugby Review Show’s Key Game of Round 10 sees the top two in National Two North clash in the Midlands. Sedgley Park are currently at the summit of the division and that is down to a nine-match unbeaten streak and seven consecutive victories.

However last weekend, the Tigers’ lead was cut to just one point as Stourbridge moved up to second in the standings following an eighth success on the spin against Loughborough Students. Neil Mitchell’s men remain the only team in the National Leagues to win all their matches thus far and considering they also have a game in hand over Sedge, another triumph on Saturday would see Stour take control of this fascinating title battle.

Watching on with interest will be third-placed Hull, who will be itching to return to winning ways at the first time of asking when they host Wharfedale in Round 10. Gary Pearce’s charges saw their own winning record come to an end against Rotherham Titans last time out, but that defeat hasn’t fully taken the shine off an excellent season to date.

As for Wharfedale, they produced a stubborn display against title challengers Stourbridge but eventually fell to a 30-20 defeat in Round Nine. The Greens would have been disappointed not to have picked up any points for their efforts, given they had collected three wins in October, so Dale will be looking to emulate that kind of form as they begin their run of fixtures in November.

Despite losing to two of their fellow promotion hopefuls in October, Fylde produced a resounding response to end the month on a high. The Lancashire outfit - who occupy fifth place in the table - racked up a total of 113 points against Bournville and Blaydon to reignite their possible title ambitions for this season.

Chris Briers and Alex Loney’s men take on Sheffield Tigers in Round 10 and the Yorkshire club were one of the teams in action last weekend. Jamie Broadley’s charges looked to be heading to a fourth straight win, but two tries in the last 15 minutes by Tynedale ended the Tigers’ purple patch of form. Can they hit back this weekend against the league’s top point scorers?

Round 10 also sees top six side Hull Ionians welcome Blaydon to Brantingham Park whilst elsewhere, Loughborough Students will be looking to return to winning ways against Huddersfield, Bournville visit Luctonians and Tynedale face Harrogate. Chester’s meeting with Rotherham Titans has been postponed due to Covid concerns.

Worthing Raiders received a shot in the arm before the first rest weekend of the season as they hit back from a disappointing loss against Leicester Lions by beating Barnes to remain at the summit of National Two South. The Sussex club - who sit just three points clear at the top - have given themselves something to build on with just six games to go until Christmas and their next assignment has paired them together with Henley Hawks.

Nigel Dudding’s side were in action last Saturday and before their clash with Hinckley, the Hawks had lost just one of their previous six games but that run ended at Dry Leas as the Hornets left Oxfordshire with a 38-21 victory. Henley will now be searching for an immediate reaction and a victory against the current pacesetters would be the ideal response.

Redruth will hope that is the case as the second-place side continue to hunt down Worthing. The Reds face Bury St Edmunds this weekend and like the league leaders, Nigel Hambly’s side were able to end the first block of fixtures with a victory after suffering a loss in Round Eight.

Their most recent success over Guernsey maintained their status as one of the leading players in an intriguing title race and they welcome a Bury side to the Recreation Ground who are yet to win on the road this term. Jacob Ford’s men have been frustratingly inconsistent, so it is no surprise to see the Wolfpack occupying a midtable spot. However, having said all of this, they are only seven points behind Redruth so a first away success of the season could give Bury’s season a whole different feel.

With Esher (3rd) taking on bottom of the table Westcliff in Round 10, National Two South’s Featured Game of the Week comes from Station Road where Guernsey Raiders travel to Clifton. The visitors come into Round 10 in fourth position and if you had offered that to Jordan Reynolds and his side before the beginning of the season, they most likely would have snapped your hand off.

The Raiders have been excellent for the first third of this campaign and they will be hoping to carry that into the Christmas period, however Clifton will provide another stern test. The hosts on Saturday are just four points off Guernsey but they stuttered in October after making a flying start. Just two wins last month has seen the Lavender and Blacks drop to sixth in the table, but a positive start to November could enable Matt Salter’s side to recapture their early season form.